The Eagles' 2015 season was essentially over before it even started 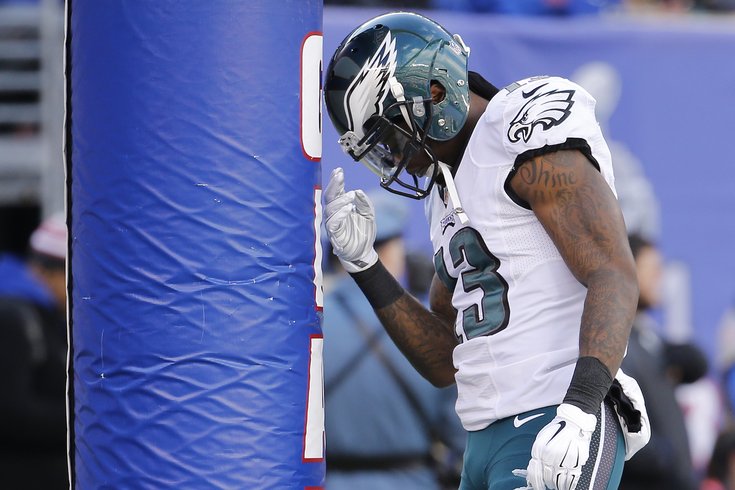 The Philadelphia Eagles 2015 season officially -- and unceremoniously -- came to an end Sunday at MetLife Stadium with a 35-30 win over the New York Giants.

For many, it ended a week earlier when the Eagles watched DeSean Jackson and the Washington Redskins celebrate their NFC East title on the field at the Linc. This includes owner Jeffrey Lurie, who decided to part ways with Chip Kelly prior to the conclusion of the coach's third season with the team.

Others abandoned hope much earlier -- like after the Eagles fell to the Lions and Bucs in back-to-back weeks by a combined 59 points -- and never bought back in after wins over the Patriots and Bills. Or perhaps back when they were 1-3 and looked completely inept offensively.

Almost no one, however, myself included, saw this coming after the way they looked in the preseason.

But if you believe what Lurie said during his press conference the day after releasing Kelly, the 2015 season likely ended long before that impressive win in Green Bay. After two 10-6 seasons, Lurie decided to take a risk and give the young coach something only one of his peers (Bill Belichick) also has: personnel control.

"There was a risk involved in allowing Chip to have that kind of say over player transactions," Lurie said on Wednesday. "However, you know, risk-reward. Sometimes the risks don't work and this case, it didn't work."

The more closely you look at the problems that led to a disappointing 7-9 record, the more you begin to see just how many of them can be traced back to decisions Kelly made this offseason. Sure, there were other factors that helped contribute to this end result; but by the time they had a chance to derail the team, it can be reasonably argued that the season had already become a lost cause.

It all started just over one year ago, in early January 2015, when the Eagles sent out a rather surprising press release announcing the promotion of then-GM Howie Roseman. It also included the following paragraph:

Head coach Chip Kelly will now oversee the player personnel department. He will also lead efforts to hire a new personnel executive – a process that will begin immediately.

The moves that followed were shocking to most -- and downright confusing to many. They also laid the groundwork for a season so poor the owner was forced to admit his mistake -- or as he referred to it, a "risk" that didn't work -- before the final game was even played.

Kelly's two prized free agents failed to live up to anything close to the lucrative deals they signed last offseason.

Byron Maxwell, who signed a six-year, $63 million deal, was supposed to be the answer to an Eagles secondary that allowed 30 passing touchdowns last season. Instead, the former Seahawk struggled in his first season away from the Legion of Boom and the defense allowed a franchise-record 34 passing touchdowns.

DeMarco Murray, on the other hand, was coming off a career year in which he led the NFL in touches and yards from scrimmage when the Eagles signed him to a five-year, $40 million contract. In his first year in Philly, Murray finished 193 carries for 702 yards and five touchdowns, his fewest since he scored four times (in 10 games) in 2012. His 46.2 yards per game and 3.64 yards per carry are both the worst he's posted in his five-year career.

The reason Kelly felt the need to overspend on Murray was because of a deal he made a few days earlier -- trading 2013 NFL rushing champ LeSean McCoy for Bills linebacker Kiko Alonso. Not only did Alonso struggle to stay healthy, but when he was on the field he looked lost or scared (most likely of re-injuring his knee).

But no matter which running back the Eagles opted for -- McCoy, Murray, or even Ryan Mathews, who despite his lesser price outperformed and ultimately supplanted Murray as the starter -- he wasn't likely to find much success.

After losing both guards in the offseason -- Todd Herremans was allowed to walk in free agency and Evan Mathis was cut after missing mini-camp -- Kelly neglected to address the position in any meaningful way. Further complicating this was the age of pro bowl tackle Jason Peters, who missed a decent amount of time this season and was clearly less than 100 percent when he was in the game.

The result? A rushing attack that never really found an identity and disappeared for weeks at a time.

And as for the aerial attack, that was hardly safe from Kelly's offseason roster overhaul. One of the moves Kelly did get right was the acquisition of Sam Bradford for Nick Foles -- we can argue about the impact of losing their second-round pick another time.

Bradford may not have gotten off to the best start this season, but the more time he got in Kelly's offense, the more dangerous he looked. He threw for 10 touchdowns and just four interceptions in his final seven games and finished the season 346-of-532 (65 pct.) for 3,725 yards, 19 touchdowns and 14 interceptions. The problem, however, was that Bradford's weapons were much less explosive than what Foles had to work with during his time in Philly.

Kelly allowed wideout Jeremy Maclin to sign with the Chiefs -- which is not entirely on the coach since the team did reportedly make a fair offer. The problem, however, is that the player Kelly presumably had tapped to replace Maclin -- first-round pick Nelson Agholor -- struggled in his rookie season. And aside from Jordan Matthews and Zach Ertz, Bradford wasn't left with much else to work with.

You can't lose players with the abilities of Maclin and DeSean Jackson in back-to-back years and just expect that any guy you plug into your system will suddenly be equally effective.

It's amazing when you look back on the season as a whole, something we can now do for the first time, at just how many things went wrong for the Eagles before the players even put on their pads.

And, yes, plenty of things went wrong on the field. But thanks to several risky moves by Kelly last offseason -- moves that were only made possible by Lurie's willingness to take a risk on Kelly -- this team was playing from behind right out of the gate.