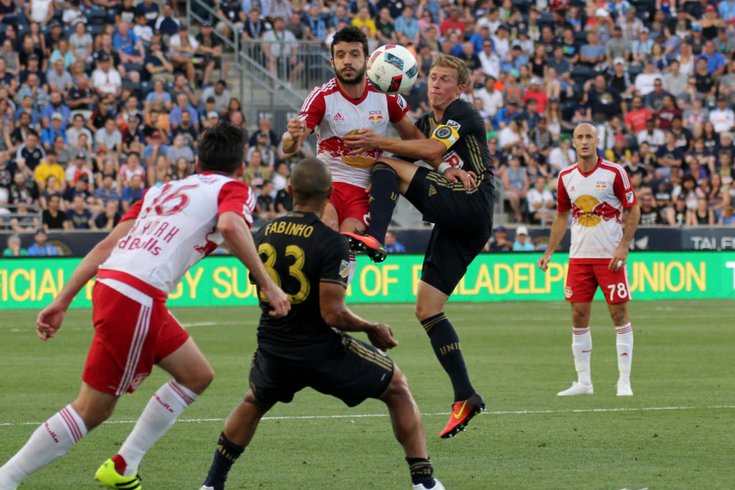 Brian Carroll battles with Felipe during the Union's 2-2 draw against New York on Sunday night.

New York head coach Jesse Marsch said that this game felt “like a loss” for his team, and he's not wrong.

The Red Bulls looked great in the first half and took a two-goal lead into the break, only to come out in the second half and allow a spirited Union team to rip off two goals in less than a minute.

Even after Ilsinho's sending-off, 10-man Philadelphia continued to push, and Marsch went to five in the back to see out the 2-2 draw even while up a man. Judging by the body language of Sacha Kljestan and Bradley Wright-Phillips, that decision didn't sit well with Red Bull players.

It's a fair result, then, considering that each team turned in one good half and one bad half.

It was also a carbon copy of the match that the Union and Red Bulls played a few weeks ago in the U.S. Open Cup.

The Union were poor in passing, possession, and patience in the first half. They couldn't handle the Red Bull press. They made uncharacteristic mistakes and looked to be blowing a big opportunity on national television.

But they adjusted well in the second half, flipped the script, and scratched out a hard-fought home point.

Hoofing it, playing diagonals, and cycling it wide

What little success Philly had in the first half came through Fabinho and Chris Pontius on the left-hand side. The Union couldn't get anything going down the right and they failed to find meaningful touches for Tranquillo Barnetta, Ilsinho, and Roland Alberg.

The scampers down the left were the product of quicker ball movement and the veteran recognition that Pontius brings to the table. There were at least four runs down that flank where he was able to carve out attacks against the run of play. Not surprisingly, it came on the side featuring converted right back Sal Zizzo and center back Damien Perrinelle, who had recently returned from injury.

This is one of those moments, where Brian Carroll drops between the center halves, plays a beautiful diagonal into the corner, and allows Pontius to start the run that leads to the goal that was whistled for offside.

They key to this play is that the Union broke pressure by moving the ball at an angle, instead of going vertically over the top. Take a look at Carroll's starting position, where Red Bull has four players up the field and he drops a dime into the corner to avert the press. 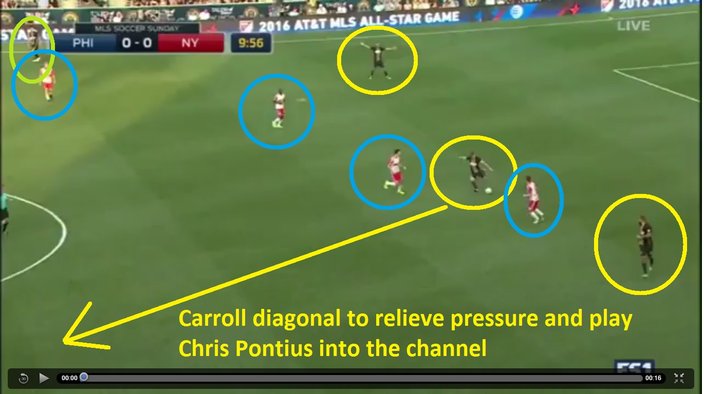 That's just amazing awareness from a veteran player. Carroll is so smart to recognize where the pressure is, identify the open space, and put the ball into that spot on the field. It's no accident that two veterans were on the giving and receiving end of this pass.

For comparison, look at the turnover that leads to the New York opener.

Ken Tribbett, to his credit, tries to keep the ball on the ground instead of hoofing it upfield. In most of those cases, Aurelien Collin was able to easily devour anything that was played vertically towards C.J. Sapong.

But Tribbett just dribbles himself into a trap here, then loses possession when trying to outlet back to Marquez.

Check out the positioning of New York on this play. It's very similar to the way they played Carroll above, with a narrow clump of five or six players ready to pounce on a bad touch or a bad pass. 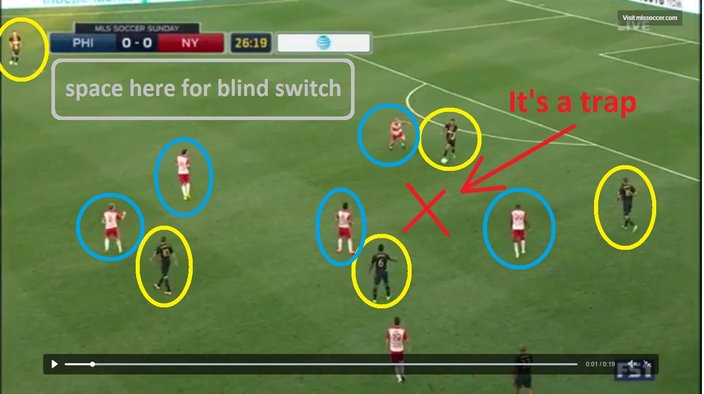 Tribbett just gets himself into a bad spot here, drives into a dead end, and eliminates options for himself.

You see the space next to Rosenberry in the top corner of the image, and that's where the ball needs to go. That's the "blind switch" that Curtin was talking about in the USOC win against New York. When you switch the field to your opposite fullback, you take that entire cluster of Red Bulls, half of their field players in this case, and force them to run 40 yards sideways to get back into the play. If Rosenberry is able to use the space and get forward quickly, you spark an opportunity similar to what Carroll carved out for Pontius early on.

In the second half, the Union did a better job of attacking those flanks and cycling the ball more quickly. The Red Bulls started to tire a bit and couldn't sustain the press the way they did in the first half, which is the same thing we saw two weeks ago.

On the equalizer, Rosenberry gets the ball wide and picks out substitute Fabian Herbers in the channel. This is actually a failed step from Collin, who tries to play Herbers offside but gets it wrong. That gives the rookie acres of space to take his time and square a ball for Pontius to finish at the far post.

The video labels this as a counterattack, but it's really not a counter. It's just quick ball movement and recognition of the high line and step.

Two goals in one minute as Pontius levels it up for @PhilaUnion. Fifteen minutes remain in #PHIvNY. Watch on @FS1 https://t.co/VjEFaqpSll

You saw similar movement on the play leading up to the Union opener. In that case, Ilsinho was able to hold onto the ball as he moved right to left across the penalty area. He then leaves it for Carroll, who immediately moves it back to the right for Rosenberry. The ensuing cross results in a penalty call.

He took his penalty well, even though it was earned by Pontius.

C.J. put in a hard-working shift, but he just couldn't do much in the hold-up game with Collin gobbling up mostly everything that came his way. Maybe there were some fouls that didn't get called. The first half was an exercise in frustration, and only in the second half did Sapong start to find some room to do his thing.

Even if he didn't get a straight red for that goofy forearm/elbow in the second half, he would have taken a second yellow and been sent off anyway.

It was an up and down night for Ilsinho, who didn't see much of the ball in the first half, but had a great chance to open the scoring with a rocket that he hit directly at Luis Robles.

In the second half, he really does deserve credit in the buildup to the penalty, as he keeps possession, pulls horizontally across the box, and leaves it for Carroll to move back to the other side of the field.

His best contribution was a nifty one-touch key pass that gave Ilsinho his chance on goal.

Otherwise, he just couldn't get on the ball and didn't seem to respond well mentally to the frustration. Alberg is guilty of showing bad body language at times and he just needs to keep grinding when the game isn't going his way.

HT: A huge save from Robles part of the reason #RBNY is heads into the break with the lead: https://t.co/eEgzdAbMWN https://t.co/BOPdYO5z7s

Pontius has now earned three penalties in three weeks, yet he hasn't taken a single one.

That's three more goals that he could have for his stat sheet, but he's shown great selflessness to allow other guys to take those kicks instead.

He's so good with timing his runs and identifying space out there. You saw those early jaunts down the left-hand side. One of those should have ended with at least a secondary assist.

In the second 45, he gets the equalizer with a well-timed back post run, which ended up being his third second-half goal against New York in 2016.

Not enough meaningful moments for Barnetta in this game, who spent a lot of time yelling at the referee.

Similar to the first matchup with New York, he wasn't dropping deep enough early on to help his team beat the press. If he's going to play the number eight role in Vince Nogueira's absence, he's just going to have to sit in a bit and help cycle the ball when the defense is struggling in possession.

He had more space in the second half, and like Sapong, he started to affect the game more when New York started to tire and concede possession.

Carroll hit two ridiculous passes in this game. The first one we illustrated above on the deep outlet for Pontius.

The second was a bullet of a diagonal that again played in Pontius, this time from a second half dead ball.

He played a smart game out there. Physically, he's obviously not what he used to be, but his veteran savvy was on display in the instances where he was able to move the ball to the right spots to avoid New York pressure.

A relatively simple game for Fabinho, who had the easier assignment in Alex Muyl.

Marquez had a great clearance on a 13th minute Kljestan free kick.

About ten minutes later, he put in that perfectly timed tackle to keep Wright-Phillips from slotting in a far post rebound.

Marquez might not be the best tackler in MLS, but I don't know if there's anyone who times their slides as well as he does.

Forgettable game for Tribbett, who had three bad turnovers, one resulting in a New York goal.

Rosenberry didn't see much of the ball in the first half, but when the Union started to open things up in the second half, he played two passes that influenced two goals.

Nothing he could do on the second goal, which took a juicy deflection off Barnetta.

Blake's best moment was that big save in the 22nd minute.

Herbers came in as a straight swap for Alberg, which I found interesting. He's never played the #10 spot this season.

But Herbers was very good in that position, and brilliantly timed the run that got him into the channel for the assist on the equalizer.

He had a really nice chance on Barnetta's late game free-kick, the one that was driven low and hard across the face of goal. Le Toux just couldn't get anything on it.

Late defensive sub to see out the result.

He didn't set the tone early, which resulted in some erratic decision making for the rest of the game.

Talen crowd and atmosphere: A+

Philly showed well on national television. It was easily the best crowd and best atmosphere of the season.

It reminded me of the 2011 Red Bulls/Union game when both teams were close to the top of the table and Roger Torres scored in the second half to give Philly a 1-0 win. The crowd noise from that goal paralleled what you heard on Sunday night after the Pontius equalizer.

This franchise can be something special if the fan turnout and enthusiasm continues to match the effort and the results on the field.

The #DOOP that almost brought the house down. 🙌 pic.twitter.com/UI9vOwI7gb