HBO’s 'Paterno' is brilliant (and scathing) in capturing a dark, sordid piece of sports history

The noise around Joe Paterno during his final days at Penn State must have been deafening. That's something HBO’s ambitious and brilliant new movie, "Paterno," makes apparent right from the outset.

Opening with a whispered cacophony of talking heads, we soon see the former Penn State coach being slid into an MRI machine, a stark reminder of Paterno's humanity, despite his often God-like status in Happy Valley. That, however, doesn't mean the the title character is a sympathetic one.

What follows is a visceral, gut-pulling journey through Paterno's layered memory and a story that dominated every media outlet – and most of America’s collective consciousness, whether they were college football fans or not. During the fall of 2011, the Penn State-Jerry Sandusky scandal seeped into our dinner discussions, into our water cooler talk, and captivated the nation with the pressing questions about a man who was so revered that no one would marry to the venal weighty shadow of child abuse.

Six-plus years later, many of those questions remain. What did Paterno know about Sandusky’s illicit behavior? When did he know it? And why didn't he do anything about it?

"Paterno," which will debut on HBO this Saturday night at 8 p.m. ET, examines just that.

Starring Academy Award-winning actor Al Pacino and directed by fellow Oscar winner Barry Levinson, the film covers the two-week span from Oct. 29, 2011, when Paterno became the winningest coach in Division I college football, to his sudden demise on Nov. 9, 2011, when he was fired by phone just four days after Sandusky, Penn State’s former defensive coordinator under Paterno, was arrested on 40 criminal counts related to sexual abuse of children.

"We tried to present it as accurately as we could," said Levinson, who’s won four Emmy Awards and deserves to be in the running for his fifth with “Paterno." "Someone asked me what’s my agenda [with “Paterno”]. I thought that was kind of weird, because I don’t really have an agenda. I just wanted to tell the story as best I could. I wanted to shape it within the two-week period, from the highest high of winning 409 games as the winningest coach in the history of college football, and literally within a week’s time, a scandal breaks, he’s fired and he finds out that he has cancer.

"I wouldn’t have participated in this if dramatic license was taken. The movie is wholly about Paterno, and they stuck to what they knew was true and what happened in those two weeks."  – Sara Ganim

"You go, look what happened in two weeks. Let’s take a look at the man – what makes Paterno so fascinating is there are so many stories about him as an educator, a scholar, a humanitarian, all of these very, very positive things. And you go, what happened – and how did it happen? That seemed a worthwhile story to tell, because it seems on face value impossible to have taken place."

Levinson paints Paterno as a stooped, preoccupied old man still in possession of his fabled tunnel vision, singularly focused on football. And Pacino becomes the living embodiment of "Joe Pa," minus the coach's sometimes shrill voice.

But the film also tells a multi-layered story, one that gives viewers a parallel glimpse into what Sara Ganim, the Pulitzer Prize-winning reporter for Harrisburg’s Patriot-News who broke the scandal, endured. 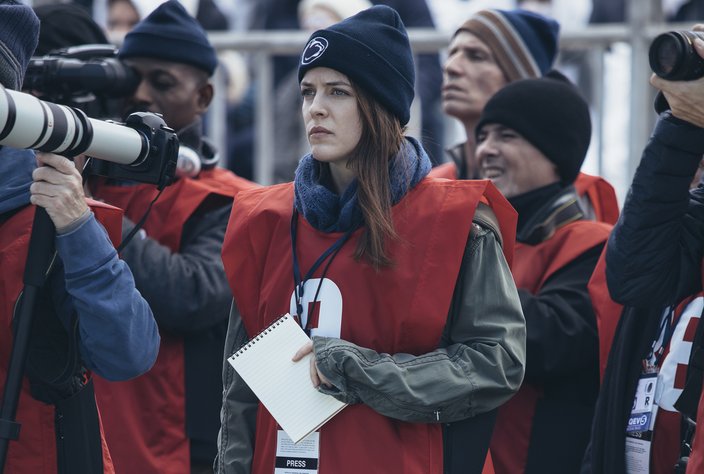 "I never thought I would ever be a major character in a movie, of course not," Ganim, now a reporter for CNN, told PhillyVoice. "It’s weird watching a portrayal of yourself. It’s not ever normal. It’s been a strange experience, but HBO made sure the essence of what happened is true. I think HBO was very careful in that way. This took a two-week time period and boiled it down into two hours.

"I wouldn’t have participated in this if dramatic license was taken. The movie is wholly about Paterno, and they stuck to what they knew was true and what happened in those two weeks. The interesting thing about this movie is everyone was aware of what was going on, the whole world was watching. [But] this movie really does explore an element we didn’t really know, and that was the internal struggle amongst that family in the progression of those two weeks.

"It’s what we didn’t see when it was happening."

Seven years after the the world’s attention descended on Happy Valley, "Paterno" reintroduces several characters we would like to forget, like the bumbling triumvirate that ran Penn State at the time, former university president Graham Spanier, former athletic director Tim Curley, the school’s ex-senior vice president for finance and business Gary Schultz.

"Paterno" also goes inside the Paterno family, describing Paterno’s eldest son, Jay, as a “doorknob” with a quick fuse and bombastic personality, and his other son, Scott, a lawyer, and his wife, as those showing genuine remorse over the victims.

"How could this happen? It’s the one thing that we’ll never be able to explain... He was the King of Happy Valley, and he didn’t know about anything? He had to know about something." – Barry Levinson

Levinson eschews dramatic license, where there is a Hollywood tendency to embellish more of a subject than needs to be made. Levinson doesn’t do that with "Paterno."

Instead, he wisely gets out of the way and lets the story tell itself.

And some of those layers are quite disturbing.

For example, one element of “Paterno” that viewers may find especially tough to bear is the vivid description of the Sandusky indictment that flashes across the screen. In one powerful scene, Paterno’s wife, Sue, is so distraught over reading Sandusky’s unconscionable acts at the family kitchen table that she begins to gag and quickly retreats to a bathroom to throw up. 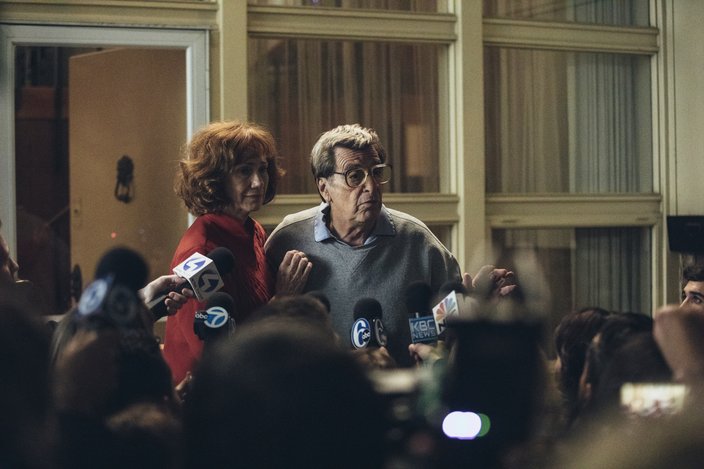 A look at Joe (Al Pacino) and Sue (Kathy Baker) in HBO's upcoming biopic on the late Penn State coach.

Penn State alums will need to brace themselves, too.

Their school doesn’t come off looking too good here. The student body looks like mindless lemmings rioting the night Paterno was fired. Internally, Spanier, Curley and Schultz look like the Three Stooges in trying to mend the mess, more concerned with the well-being of the school’s all-powerful, million-dollar-making football machine than they were with the fact a child molester was among them – and that their indifference had allowed his heinous acts to continue for years.

The movie, which is so magnetic it will have you cursing at your TV, demanding answers as to why no one stopped Sandusky, also casts a great gloom on Paterno himself, hinting that the then-octogenarian also knew and did nothing about it, other than tell Curley what McQueary, then a Nittany Lion graduate assistant, admitted to him back in 2001.

So what exactly did Paterno know? And when?

“Part of that is the mystery of it,” Levinson said. “There were certain things that you wonder about. If he knew everything, and he didn’t say anything, or did he not pay attention, because he was single-minded in his quest in terms of football and that which goes into it. He had this hyper focus, so did he not see the world around him and the elements that were not taking place?

“How could this happen? It’s the one thing that we’ll never be able to explain, because you heard from a number of people that Paterno did believe in education, he did believe in this, and he did believe in that. He was the King of Happy Valley, and he didn’t know about anything? He had to know about something. Did he not pay attention to it? What happened? There is missing piece that none of us can address away or explain. It’s that one thing that it’s okay, because life is not that simple. Sometimes, some things don’t line up exactly where you can say, ‘Therefore, four and four equal eight.’

“The Paterno thing is more complicated. You try to show it, not in the sense of good and evil, but in a humanistic fashion that there was a failure here. Ultimately, if everyone would have addressed the first boy’s statements, when it took place, and they dealt with it, nothing would have ever happened after that.”

What he actually knew and when he knew it will be forever left to speculation – though “Paterno” certainly sways in the direction that he did know something, quite possibly more than he was willing to admit. 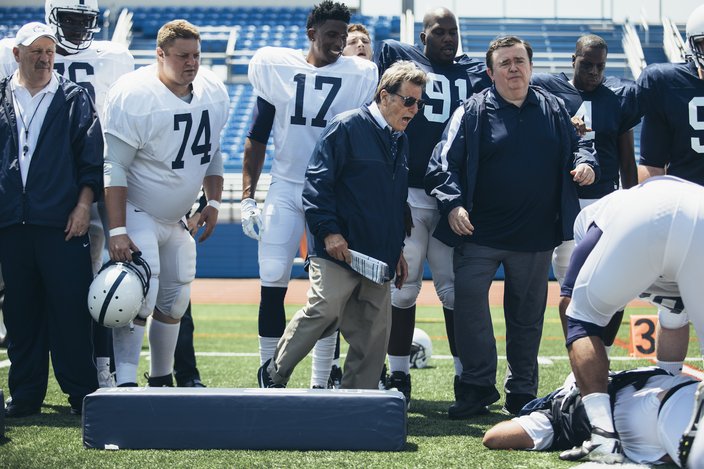 A look at Al Pacino as Joe Paterno in HBO's upcoming biopic, “Paterno.”