Health officials: Mobile apps could be linked to syphilis uptick in Philly

The number of syphilis cases in Philadelphia has quadrupled over the past decade thanks to a sharp increase last year, the city's health officials said.

On Thursday, a Department of Public Health report outlined the recent impact of the sexually-transmitted infection on city residents and possible causes.

Health officials noted that syphilis diagnoses have steadily increased in the city and across the United States since 2005. In Philly, 208 cases were reported 10 years ago, but the number ballooned to 925 in 2016. 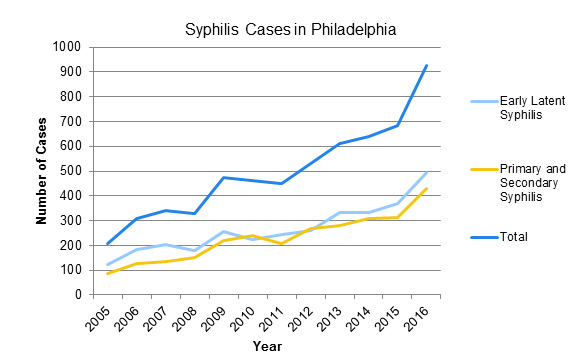 While the figures show a rise in both women and straight men, a majority of last year's outbreak was among gay men. In 2016, about 61 percent of cases were reported in men who had sex with other men.

Looking closer at the statistics for gay men, the department found that infection rates are twice as high in blacks than in whites. Also, 52 percent of new infections were among men 30 years old and younger.

Despite a noticeable bump in cases affecting gay men, the number of sexual partners claimed by the group didn't vary much from women and straight men. On average, each group reported having five or six partners during the 12 months prior to diagnosis.

What did stand out for health officials was how gay men were meeting sexual partners. Of those infected with syphilis last year, about 200 cases were attributed to the use of mobile apps to find partners. That's more than double the number of cases reported the previous year. Meanwhile, the rate of infections from men who meet partners "on the street," in a bath house or through the internet remained flat. 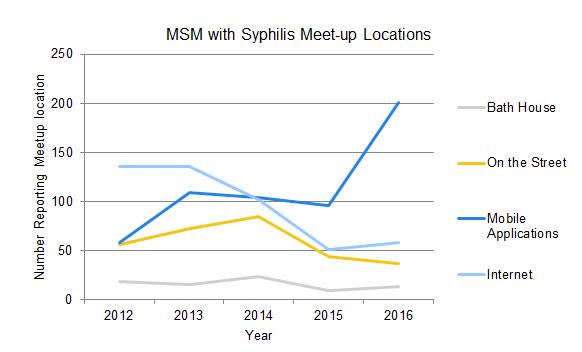 "These apps present a challenge for identifying and treating sexual partners of syphilis cases because the interaction is often anonymous and cannot be re-traced," the department warned.

While health officials are developing strategies to prevent the spread of syphilis, the department urges the public to use condoms during sex and know the signs and symptoms of the infection. Those include painless genital ulcers or a rash that spreads over your body.