Heavy metal: the Barnes explores the whimsy of wrought iron 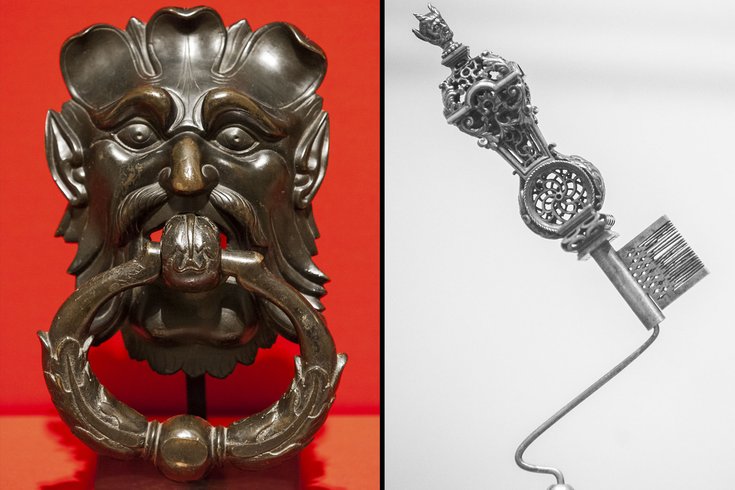 The Barnes Foundation is world-renowned for its impressive collection of Post-Impressionist and Early Modern works, African sculptures and Pennsylvania German wares.

But some of its most remarkable items hide in plain sight: more than 800 wrought iron objects perched on its walls, interspersed among the Renoirs and the Cezannes. These handmade objects, some large and some small, caught artist Ellen Harvey's attention when she first visited the Barnes in 2011.

"I was captivated and slightly sorry for them, going 'mano a mano' with these master works of art," she said.

Albert C. Barnes was similarly captivated by the material and in 1936, began collecting pieces of wrought iron, a malleable iron alloy worked by hand. As is fitting with his famously quirky curatorial philosophy, the collector did, in fact, allow the pieces to stand equally with and complementary to his collection of fine art. Now they hang like punctuation marks throughout the permanent collection.

Barnes was not alone in this fascination either. French collector Jean-Louis-Henri Le Secq Destournelles (1818-1882) was also an avid collector, an enthusiasm he passed down to his son, Henri-Jean (1854-1925). The collection they amassed together – more than 15,000 objects – was given to the French city of Rouen and has been displayed in the Church of Saint-Lauren since 1921. 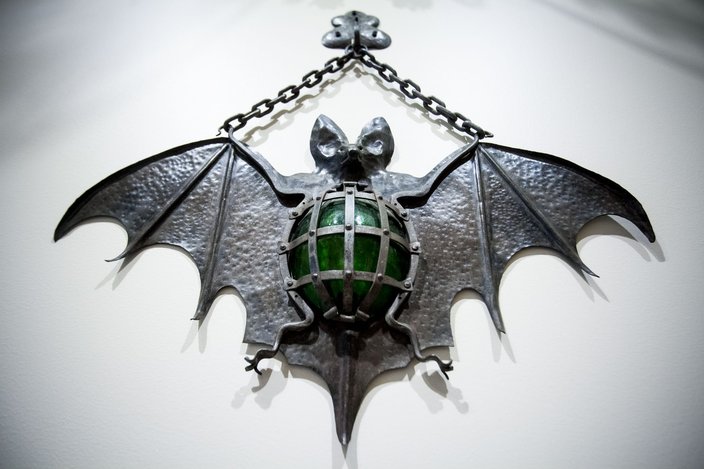 "Strength and Splendor" gathers some of the most sophisticated and finely crafted pieces from the Le Secq collection to stand in contrast to, and in conversation with, Barnes' assemblage of simply profiled objects. "Metal Painting," commissioned by the Barnes specifically for this exhibition, is an ensemble of silhouette paintings of the 887 pieces of wrought iron in its collection.

Both exhibitions have been curated by Judith Dolkart, director of the Addison Gallery of American Art at Phillips Academy and former chief curator at the Barnes Foundation. Ahead of the exhibit's official opening, Dolkart described "Strength and Splendor" as re-contextualizing the wrought iron objects Barnes had so cleverly displayed. By isolating and simplifying them, Dolkart said, "Metal Painting" decontextualizes them yet again. 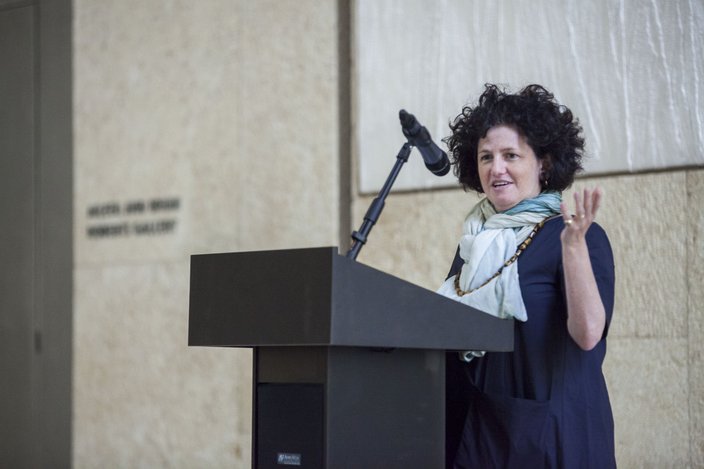 "Strength and Splendor" features about 150 objects that date from the Middle Ages to the early 20th Century, from door knockers and locks to cabaret signs and even jewelry. Though they are highly decorated and finely detailed, most of the objects were created to be used frequently. They are both durable and beautiful, and most come from unknown, everyday craftsmen.

From start to finish, the exhibit is a window into a world where ornamentation was a source of pride not only for an object's owner, but for its maker. 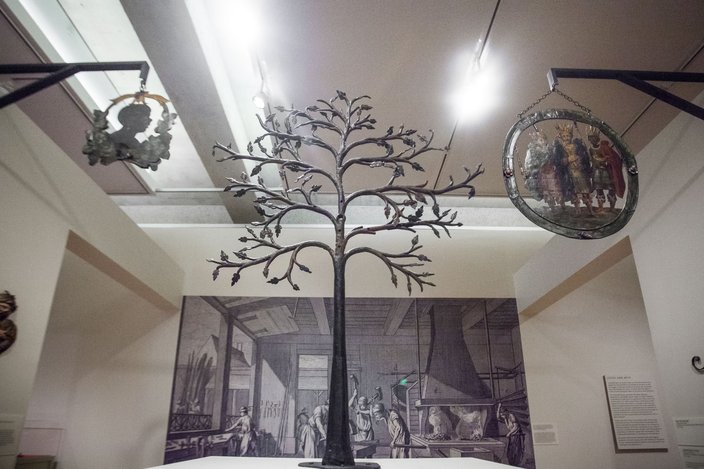 Many of the pieces, though looking deadly serious in their dark metal hue, have a striking sense of whimsy about them. From dog- and bat-shaped store signs to sconces that hold candles in two fists and lighters made to look like pistols, it's clear the unnamed craftsmen who created these objects were having fun with their work.

"I think the craftsmen had a sense of humor," Dolkart said, "and in an era when people may have been illiterate, in particular with the signs, they were supposed to call on meanings that people understood or that they could immediately associate....People were making things to suit their clients but also to suit themselves."

Some of the works bring clear pop culture references to mind, places with non-specific yet fantastical time periods, like "Game of Thrones" or "Lord of the Rings." When seen all at once, they make the gallery feel more like the set of a Tim Burton movie than an art exhibit.

"It takes a skilled craftsman to recognize what he was making and add a sense of fun to it, but at the same time there’s a lot of technical skill in the making," Dolkart said. 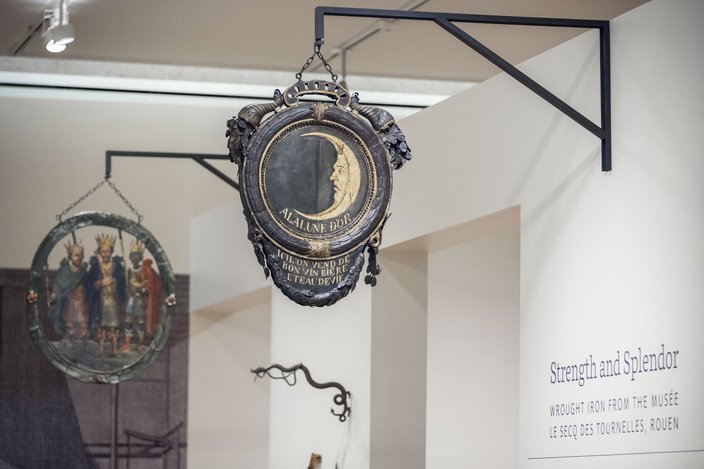 While creating her accompanying work, Harvey related to the men who would have made these wrought iron works. Over the course of a year, she traced the life-size silhouette of each of the Barnes' 887 pieces of wrought iron onto plywood panels and then painted them in various shades of metal gray. Each one was given industrial strength magnets so they could hang on a metal wall. They were then arranged, piece by piece over the course of a month, in a distinct rhythmic pattern that echoes Barnes' own collection. 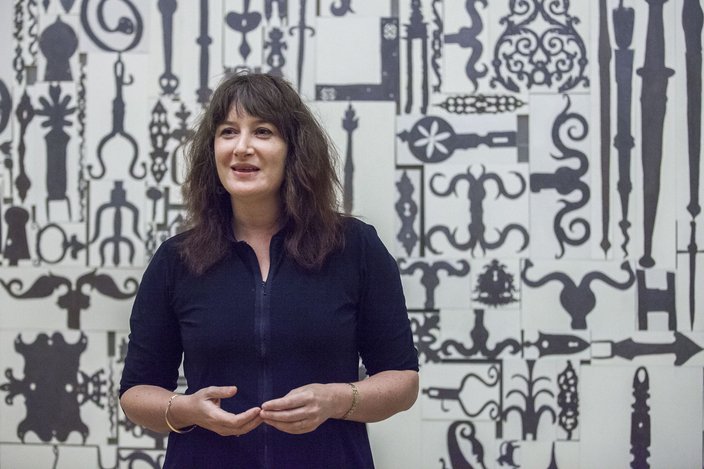 Artist Ellen Harvey in front of her site-specific piece composed of 887 portraits, on magnetized panels, of each piece of wrought iron in the Barnes Collection galleries. (Thom Carroll/PhillyVoice)

"It made me think a great deal about the people who had made the original objects," Harvey said. "In a way, it was sort of manual labor making this piece, and it made me think of the people who now are all forgotten, but in their days were all competent and excellent men (and possibly women) making things and the sense of urgency that they had in terms of feeling free to decorate and invent.

“It made me think about what we’ve lost,” she added. “We don’t have that kind of artistic agency in our everyday lives. Whatever you do in your life, you generally don’t have a lot of aesthetic freedom."

Our lack of aesthetic freedom, as Harvey calls it, is thrown into sharp contrast when one is surrounded by everyday objects made with such care. It's hard to imagine anyone putting as much decoration and love into an expense report as an 18th-Century locksmith could fit onto one key. 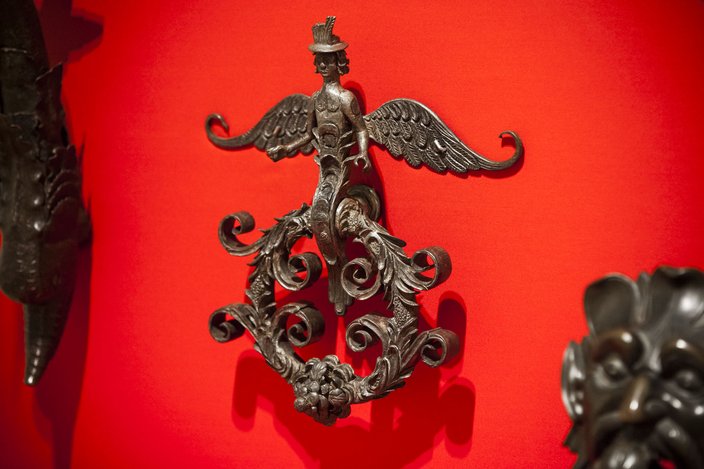 "We live in a much more disposable culture,” Dolkart said. “The things that we buy are made to be obsolete fairly soon. Certainly there are objects that we buy that are meant to be durable and to be cherished and to be passed on to others, but looking to technology, we all have to have the next phone or the next music player or whatever it is. There was a real pride in making these things, so they’re elaborately ornamented and really carefully crafted."

As an artist who frequently works in public space - and after so carefully documenting these wrought iron works - Harvey suggested we reassess our contemporary Modernist tendencies toward clean lines and white space. It's often corrupted by consumer culture and advertising anyway, she argued. 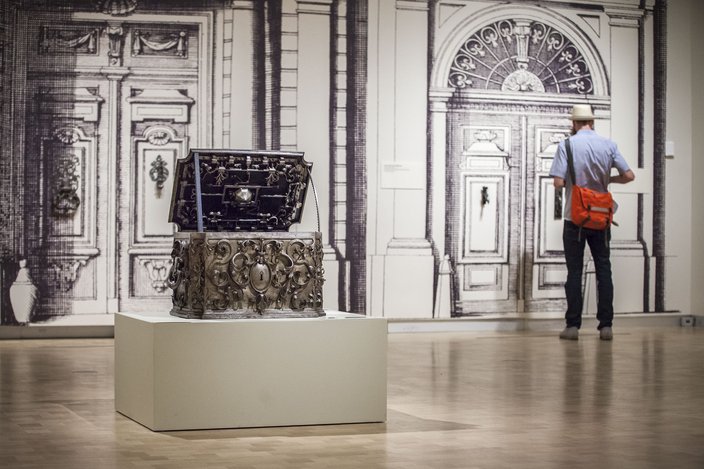 "Part of me thinks maybe it’s time for ornamentation to make a comeback," she said.  "A public space should be beautiful and interesting and really about a sense of shared purpose and not just a sense of buying the latest thing."