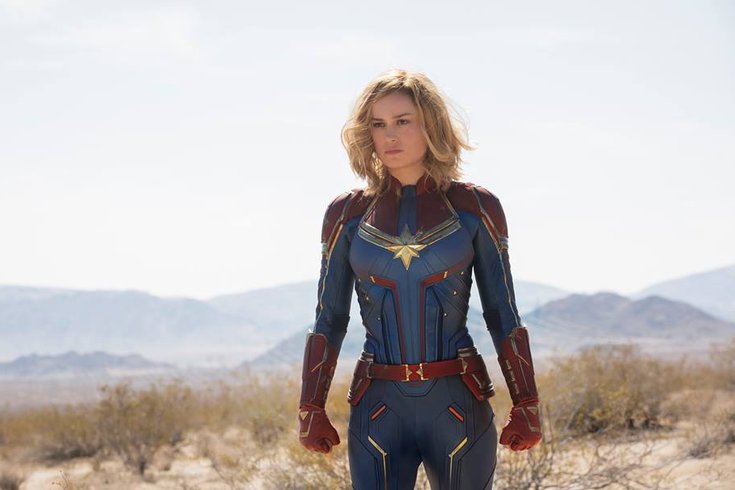 Brie Larson stars in "Captain Marvel," and the character received a write-in vote in the Philadelphia suburbs during the May 2019 primary elections.

Last week, we brought you a review of write-in votes cast in Philadelphia for the May primary elections.

There were sports stars, homages to the Furnace Party letter, activists who launched write-in campaigns and, of course, Gritty.

Today, we bring you the best (or worst) of write-ins from suburban Philadelphia counties.

New Jersey had elections a week or so later, so we'll include results from several counties over that way.

Specifically, we’re looking at Bucks, Delaware and Montgomery counties in Pennsylvania and Camden and Gloucester counties in South Jersey. (We didn’t forget about Chester County; it doesn't review ballots unless there are “races where any potential write-in winners may emerge,” per Chesco’s deputy county administrator Kara Rahn.)

Of particular note is the fact that Gritty, who was shut out from Delco votes during the November 2018 elections, finally received one from the place most associated with it spiritually, culturally, animalistically and behaviorally.

Anyway, let’s get to breaking them down by county, shall we?

A grand total of 1,126 write-in votes were cast via machines, absentees and civilian or military overseas ballots. And, they're all listed on about 310 pages that the Bucks County Board of Elections made available to PhillyVoice on Tuesday. (Thanks, folks!)

There were no votes cast for Philly sports mascots, but there were some noteworthy candidates who drew support. To wit:

• Anyone not associated with Donald Trump (Common Pleas Judge)

• Anyone not a Trump Buddy (Magisterial District Judge)

• Someone not associated with Donald Trump (Darby Boro Council)

When Montco switched over to paper ballots last month, one of the unexpected results was that it became substantially more difficult for election officials to share an Excel spreadsheet of write-in votes, as was past practice.

So, there is no record of noteworthy write-in votes from the May primary. (I know for a fact that both Gritty and Boban Marjanovic received write-in support for judicial spots at my polling place because, well, I just do.)

"The write-ins are now handwritten," said John Corcoran, the county's director of communications. "At tabulation, they only record write-ins if there are enough to meet a threshold. They don't record what they consider disqualifying votes at all, which would be votes for not a real person like Gritty or Mickey Mouse.

"To compile a list like Voter Services had in the past, someone would have to go through all 100,000 ballots and manually record them to the list."

• Phanatic (Board of Chosen Freeholders)

• Frida Kahlo (Board of Chosen Freeholders)

• Liz Lemon (Board of Chosen Freeholders)

• Coutinho (2 votes for Board of Chosen Freeholders)

• Bro (Board of Chosen Freeholders)

• Will I Smell Gas In My Water (Berlin Boro Council)

• Beyonce (Board of Chosen Freeholders)

• Adolf Hitler (Board of Chosen Freeholders)

County Superintendent of Elections Stephanie Salvatore shared that these sort of inquiries "are not as much fun" when about eight percent of registered voters turn out to exercise their right to vote.

Sure, two serious candidates got on the ballot for Republican Freeholder races after failed petition submissions in April. As it comes to entertaining votes, well, they were few and far between.

Yoko Ono was written in for Republican freeholder and Donald Trump received some support as a Democrat for Pitman Council, but that's about it.

"I'm sure it will get way more creative next year for the presidential election," she said.