Pundits are projecting this year’s midterm elections to be nasty, polarizing and “epic.”

They’re also expected to stress a lot of Americans out in every part of their lives. And that includes at the office.

I recently conducted a study on a broad range of workplace issues, including how the stress of our increasingly divisive politics is affecting worker health, productivity and relationships with colleagues. I also wondered: Is there anything company managers can do about it?

Historians have traced its history all the way back to the founding founders. But politics seem to be dividing Americans more and more.

In a recent article in Scientific American, psychologists Cameron Brick and Sander van der Linden explained that individuals of different political ideologies “not only disagree on policy issues, they are also increasingly unwilling to live near each other, be friends, or get married to members of the other group.”

Consequences include marital stress, divorce, family separations and even sharp divides over national pastimes like football.

There is a bright side – if you’re a therapist and benefiting from an uptick in business perhaps as the result of a malady described as “Trump Anxiety Disorder.”

I wanted to see just how bad it’s getting in the workplace.

My field study, conducted this past summer and part of a larger project I intend to have peer-reviewed and published on the anxiety-inducing properties of political conflict, conjoins my interests in the areas of incivility, entitlement, worker self-serving behavior and bullying.

I asked 550 full-time workers whose email addresses I obtained through my undergraduate students to react to hundreds of statements about a wide variety of work issues, from abusive bosses and workplace relationships to incivility and health. I also asked about the pervasiveness and impact of unwelcome partisan exchanges.

Participants were asked to indicate how much they agreed with each statement, from strongly disagree to strongly agree. Most of the workers were based in the eastern or southeastern United States, but some were scattered throughout the country. Key characteristics of the data such as age, gender and ethnicities are broadly in line with national statistics.

Using students to solicit participants in a survey has become an increasingly common and important research tool. As such, although the data aren’t entirely representative of the U.S., I believe they still offer meaningful insights.

Twenty-seven percent of the participants agreed or strongly agreed that work had become more tense as a result of political discussions, while about a third said such talk about the “ups and downs” of politicians is a “common distraction.” 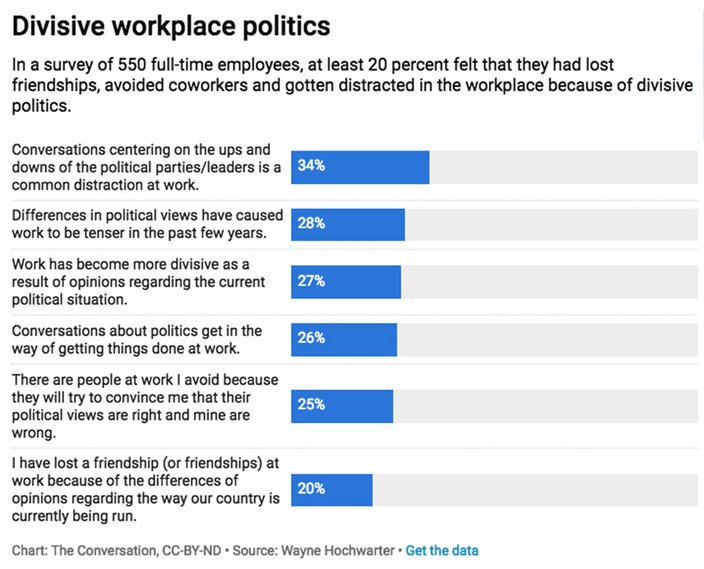 One in 4 indicated they actively avoid certain people at work who try to convince them that their views are right, while 1 in 5 said they had actually lost friendships as a result.

And all this has serious consequences for worker health and productivity.

Over a quarter said political divisions have increased their stress levels, making it harder to get things done. Almost a third of this group said they called in sick on days when they didn’t feel like working, compared with 17 percent among those who didn’t report feeling stressed about politics. A quarter also reported putting in less effort than expected, versus 12 percent. And those who reported being more stressed were 50 percent more likely to distrust colleagues.

These percentages represent fairly high increases from similar surveys taken before the 2016 election. For example, back in September 2016, 17 percent of those surveyed by the American Psychological Association said they felt tense or stressed out as a result of political discussions at work.

The association did a follow-up survey in May 2017 already revealing increased stress levels, a drop in worker productivity and other consequences following the election of Donald Trump. My findings, however, suggest things have gotten even worse. That 2017 survey, for example, reported 15 percent of respondents saying they had difficulty getting work done. My data put it at 26 percent.

WHAT MANAGERS CAN DO

After conducting this study, I wondered what company managers are doing about politics-related stress in the workplace. So I reached out to 20 business leaders from a variety of industries whom I have become acquainted with over the years in my role as a professor.

I discovered a few common themes.

One was that the problem often began with a higher-level employee sharing his or her political views with others, whether welcome or not, making underlings feel they could engage in similar behavior in the office. A manager of a publishing company, for example, noted that he had to fire one of his unit leaders because he could not put his political beliefs away during his shift despite a series of reprimands.

Another was that banning all political discussions was also bad policy, since it opened the door to lawsuits over free speech issues.

What the “right” policy about what boundaries to set for political chatter at work remains an open question. The key point is that the business leaders I spoke with tended to agree that managers need to get their heads out of the sand and address the problem head on. They seemed to think a lot of managers appeared to be ignoring the problem and hoping it would go away.

Also, a number of them added that they are now investing in programs that help manage conflicts and disagreements at work – among employees and with customers.

At the end of the day, there’s little companies can do about how politically divided the nation becomes. But keeping it from stressing out employees at work and causing productivity and other problems is primarily about effective leadership and being proactive, and showing employees a level of civility that is often absent outside of the workplace.