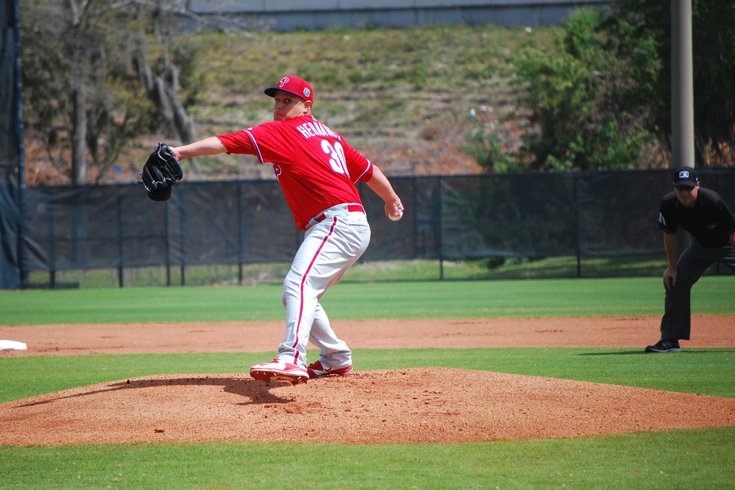 David Hernandez was smacked around a little but came away pleased with his first inning of work in two weeks Tuesday.

CLEARWATER, Fla. – Despite the conga line of base runners making their way from home plate to first base – and beyond – in his only inning of work on Tuesday afternoon, veteran relief pitcher David Hernandez returned to the major league clubhouse encouraged.

Hernandez didn’t record an out until three runs were already across the plate in a minor league game at the Carpenter Complex between the Phillies and the Toronto Blue Jays Triple-A team. He gave up two doubles, including one that only stayed inside Robin Roberts Field because the batter’s eye screen in dead center is about 40-feet high.

(The ball was hit by hit by Rowdy Tellez, one of the top 10 prospects in Toronto's system, for what it's worth).

Still, Hernandez said it was the best he felt since he was shut down following his only Grapefruit League game on March 1.

“You’re never really going to feel all the way right once they cut into you,” the Tommy John survivor said. “But it’s the best I’ve felt since I’ve been here, so I’ll take it.”

“It’s probably the best I’ve felt the last two weeks,” he said. “Obviously the results weren’t what I wanted, but I’m just trying to get in get out healthy and I feel really good. Just fine tuning command and the offspeed pitches.”

The 30-year-old Hernandez signed a one-year, $3.9 deal with the Phillies in December. He was the front office’s only major league acquisition on the free agent market this winter and he entered camp as the odds-on favorite to be the team’s closer.

But he said he first felt discomfort in his elbow – an elbow he had Tommy John surgery on two years ago this month – after throwing a live batting practice session last month during the first week of full-squad workouts in Clearwater.

The discomfort isn’t completely gone, either.

“Here and there,” Hernandez said. “It’s been mostly just post throwing. It kind of gets tight on me, but during pitching and playing catch it doesn’t really bother me. It’s just calming down, it gets cold on you and it just gets stiff. It’s just part of getting back.

“When I threw my first game I felt it while I was throwing, so now I don’t feel it while I’m throwing. It’s a good sign.”

“You’re never really going to feel all the way right once they cut into you,” the Tommy John survivor said. “But it’s the best I’ve felt since I’ve been here, so I’ll take it.”

Hernandez believes he has plenty of time to catch up this spring and break camp with the team, too. Following Wednesday’s day off in the Phillies schedule, they will play 17 more exhibition games between Thursday and Opening Day in Cincinnati on April 4.

“Yeah, that should be more than enough time,” Hernandez said. “Now it’s just about fine-tuning pitches hopefully. We’ll see how I bounce back tomorrow. Yeah, just time to go pretty much.”

If he bounces back as he expects, Hernandez is one of the few bullpen locks for Opening Day, with fellow veteran right-hander Jeanmar Gomez and probably at least one of the two veterans in camp on minor league contracts, Andrew Bailey and Edward Mujica.

Speaking of which: it's uncertain if Hernandez will win the ninth inning job many expected was his for the taking a month ago, as those non-roster pitchers (and former big league closers) have both showed promise during the first two-plus weeks of Grapefruit League games.

Bailey struck out all three batters he faced in the Phillies 5-2 win over the Tampa Bay Rays in Port Charlotte on Tuesday. The South Jersey native and former two-time All-Star hasn't allowed a run (or a walk) in four games this spring and has given up one hit while striking out five in four innings.

While Hernandez is progressing, Bailey may have moved passed him in the race for the closer's job since games got underway two weeks ago.

One of the other pitchers still in camp competing for a bullpen job could be sidelined for some time: right-hander Yoervis Medina was removed from Tuesday's game after facing three hitters in the bottom of the ninth inning.

"He felt a pop in his elbow," manager Pete Mackanin said. "We're going to get it checked out."

Medina was acquired in the trade that sent former first-round pick Jesse Biddle to the Pittsburgh Pirates this winter.