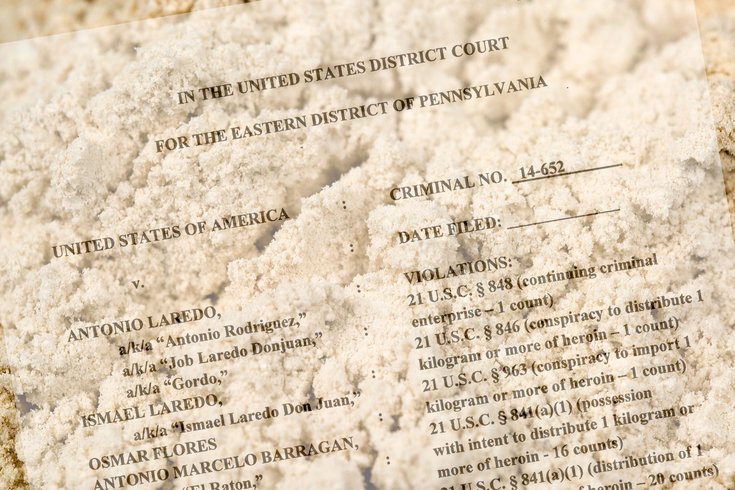 A 108-count superseding indictment, unsealed June 2, 2015, charges 37 people as participants in a multi-state heroin trafficking organization with ties to Mexico.

A multistate drug trafficking organization allegedly imported 1,000 kilograms of heroin into the United States from Mexico, smuggling the drugs in car batteries, bumpers, vehicle traps and concealed cans for transfer to several cities including Philadelphia and Camden, according to a federal indictment unsealed Tuesday.

Antonio and Ismael Laredo, who are brothers from Cuernavaca Morelos, Mexico, allegedly led the organization that conspired to smuggle and distribute heroin in the United States, according to the indictment.

“Because of the persistent and collaborative efforts of multiple law enforcement agencies across the country, a major supplier of heroin to the Philadelphia region is out of business," Memeger said in a statement.

The indictment alleges Laredo members used violence, including murder, arson, assault and kidnapping, to protect the organization's product and proceeds to prevent members from withdrawing.

“Dismantling this extremely violent international drug trafficking organization ended the flow of hundreds of kilograms of Mexican-based heroin into the Philadelphia region and is a direct result of DEA’s resolve to make our communities safer," Tuggle said in a statement. "This was a cooperative effort with local, state and federal agencies. The flow of Mexican-produced heroin into southeast Pennsylvania has been significantly impacted.”

The indictment alleges the Laredo brothers arranged for the manufacture and production of car batteries in Mexico with concealed compartments designed to import heroin.

In 2012, a courier allegedly concealed three kilograms of heroin inside a car battery for transport from Mexico to Philadelphia, according to the indictment. Another shipment of four kilograms allegedly was concealed inside a car speaker box. Couriers allegedly were directed to deliver the heroin, including 7.6 kilograms shipped in concealed fruit and vegetable cans in Texas, to the Vargas organization in September 2012.

If convicted, the Laredo brothers each face a mandatory sentence of life in prison, millions of dollars in fines and criminal forfeiture judgment to the United States of up to $60 million. Most of the drug trafficking defendants face mandatory minimum sentences of at least 10 years in prison.

The local residents named in the indictment are: