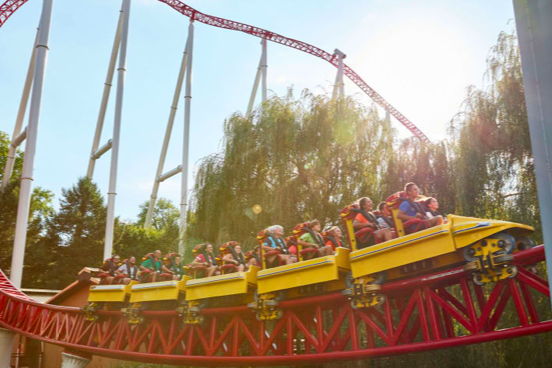 Anthony DeNoto 3rd and his son visited Hersheypark on June 26, 2018. As they boarded the park's Storm Runner roller coaster, staff allegedly failed to address the boy's malfunctioning safety harness, according to a lawsuit filed in Dauphin County Court.

A father who took his son to Hersheypark two years ago has filed a lawsuit against the theme park, alleging negligence in an incident that occurred on the popular Storm Runner roller coaster.

Anthony DeNoto 3rd and his son, who was 9 years old in 2018, visited Hersheypark with excitement because the boy had finally grown tall enough to ride some of the park's best attractions.

On June 26 that year, DeNoto and his son boarded Storm Runner together, but the boy's safety harness allegedly could not be secured. DeNoto, who was strapped in, shouted for one of three ride attendants to assist with the problem, but he claims no one came to help, according to the lawsuit filed in Dauphin County Court.

As the ride began to shift into motion, DeNoto's lawsuit says, "he could see the terrified look of panic on in his son's face," even as he was constrained by his own harness and could not help, PennLive reported.

Fearing "certain catastrophic injury and most likely death," the boy jumped from the ride at the last moment, leaving his father aboard as he exited.

Storm Runner reaches 150 feet high and turns upside down at three points during the ride, along with navigating sharp turns. Within two seconds, the car carrying passengers jumps from 0 to 72 mph.

DeNoto, who now lives with his family in New York, claims that he and his son still suffer from "anxiety-like symptoms" as a result of the incident.

Hersheypark's website notes that Storm Runner will be closed for the 2020 season when the park opens July 3 following several months of coronavirus restrictions in Pennsylvania.