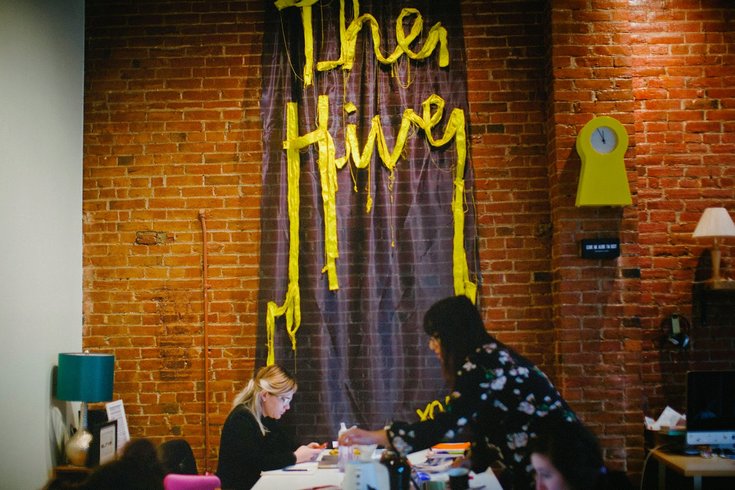 Since its opening in November 2014, The Hive has been Philadelphia’s premiere co-working space for women. For over a year, founder Melissa Alam has been dedicated to creating a safe and friendly environment where professional and creative women of all types can release their inner “Queen Bee.”

On Tuesday, Alam announced via Facebook that The Hive would no longer exist at its 900-sq.ft  property located in Old City.

To all of our lovely members, supporters and fans, I will be closing The Hive and not renewing our lease come January...

The Hive, a small yet chic space, was only able to house about 10 members at a time and didn’t provide much room for growth. Because of the size it was hard for Alam to imagine a future for herself and her company in that space.

“It was a tough decision but at the end of the day, as a business owner I needed to make the most logical decision for myself and the future of The Hive. It's not the end for The Hive, as I plan on keeping active with the community of boss ladies here in Philly, as well as host another conference and more workshops in the future,” Alam told PhillyVoice.

The journey began for Alam when, after holding a career panel for her website Femme & Fortune, she realized that there was a great need for a space where women could find professional support from other women with whom they could relate.

“I want to provide an outlet and resource for those women to come together and get the support, mentorship, advice, etc. that they’re craving as female business owners,” Alam told Technical.ly Philly ahead of The Hive's launch.

In addition to being the city’s first and only women-centered co-working space, The Hive hosted professional development workshops, networking mixers, and much more. While reflecting on her time at 222B Race Street, Alam recalls some of her favorite moments.

“I've had so many beyond amazing memories with friends and the community because of that space. Getting a resolution from Councilwoman Blondell Reynolds Brown during a networking event at The Hive was pretty great. All of the workshops and events that brought people into the space for education, mentoring, or some simple inspiration have made opening the space so worth it for me.”

With The Hive, Alam has set a powerful example of how important it is to create safe spaces where underserved populations can thrive.

“I'm so happy I was able to show Philadelphia and beyond the positive benefits of building up a community like The Hive,” Alam said.

In the past, Alam and The Hive brand motivated and supported both male and female professionals across the city with events like Fearless Philly Week and 30 Under 30 PHL.

When it comes to next moves, it appears that Alam has things figured out.

Despite no longer having a physical space, Alam still plans to produce more projects and events. For now, she's preparing for the launch of an independent print publication, Spoonful Magazine, for which she is the Online Editor & Social Media Director.

“What's next isn't a complete mystery," she said, "but one where I'm personally able to dive into more passion projects, client work, explore the world and really take some time to and for myself.”