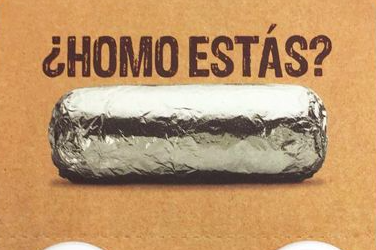 Philly's Gay Pride Parade was a celebration on Sunday, trekking from 13th and Locust to the Great Plaza at Penn's Landing for an afternoon of festivities and food.

Lovable Chipotle, known to support LGBT causes, may have raised eyebrows more than anyone on Sunday, Refinery29 reports.

The company's float featured a huge burrito wrapped in tin foil, with the tagline: "So Big, You Can Ride It." A group of Cowboys manned the float.

Chipotle also passed out two-for-one coupons that read, "¿Homo Estas?" It's not the first time the company has used the phrase, but this year's Pride Parade catapulted a lengthy discussion on Reddit, which brought to light a new word, "bi-Mexual," among other debates.

If you're particularly moved by all of this, you can purchase a ¿Homo Estas? shirt here.