Howard prepping for final game with Phillies: 'I'll embrace it'

On Saturday, Ryan Howard tried his best to prevent another team from celebrating on his home turf by hitting his 25th home run of the season in the Phillies eventual loss to the New York Mets.

On Sunday, it will be time for Howard to say goodbye.

Although the Phillies cannot decline the club option on Howard’s contract until after the World Series, when they will instead pay him a $10 million buyout (just as they cut Cliff Lee a $12.5 million check last November), everyone knows that Sunday is Howard’s final day in a Phillies uniform.

Before the weekend, the team announced that they would have a special pregame presentation to Howard at 2:30 p.m. tomorrow, a half hour before the final game of the 2016 season begins. So what does Howard know about the day ahead?

“That Sunday is tomorrow?” Howard, a bit uncomfortable with the mini-farewell tour, joked while standing at his locker inside Citizens Bank Park late Saturday afternoon. “You (guys) probably got the inside track. I just show up. So I’m just going to show up and see what happens.”

Howard was given a curtain call after hitting his game-tying home run on Saturday. He admitted it was a “cool” moment, but said his mind was simply focused on trying to do his best to beat the Mets on Saturday.

But the Mets have clinched both a playoff berth and home field in Wednesday’s Wild Card game. Other than preparing for that game and awaiting their opponent, they have nothing else to play for on Sunday in South Philly.

The day will belong to Howard.

One of Howard’s long-time teammates, fellow former MVP Jimmy Rollins, shared his thoughts on the end of Howard’s iconic career with the Phillies through his agent on Saturday.

"When Ryan first arrived in Philadelphia, he was merely filling in for Jim (Thome) in the eyes of many, but he did not let that opportunity to shine pass him by,” Rollins said. “He quickly became feared as he won Rookie of the Year and MVP honors in consecutive years and reached 200 home runs quicker than anyone in the history of the game. He loved the pressure and wanted to be the man at the plate when the game mattered most.

“During our run, we leaned on him many times for big hits and clutch home runs and he found ways to deliver. Ryan never stopped working to better himself and his craft…whether it was getting to field early for extra defensive work or finding that sweet home run stroke. Although he hit a lot of them, he was more than just a power hitter, he was a great teammate!! 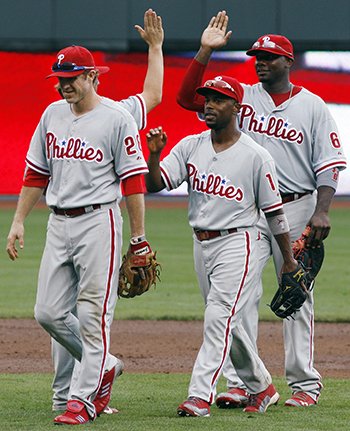 After Mike Schmidt, the best three infielders in Phillies history happened to play together during the glory years under Charlie Manuel.

“We all hoped to bring more than one championship to Philadelphia, but without Ryan that one may not have been possible. So, many thanks to “Big Piece” for being such a big piece of the best years of my career in the City of Brotherly Love!!!”

There’s a very good chance many Philadelphians feel the same way about Howard, especially when they remember the 2008 World Series, the “Get Me to the Plate Boys” a year later in the NLDS in Denver, the hundreds of moonshot home runs, the seven-year period from 2005-11 when he hit .275/.368/.560, with an average of 41 home runs and 123 RBI per year.

There’s a very good chance they’ll give Howard a sendoff similar to the homecoming another iconic former Phillie, Chase Utley, received in August at Citizens Bank Park. Again, that pregame ceremony is set to begin at 2:30 p.m.

“With whatever it brings,” Howard said, “I'll embrace it and take it in, and enjoy it.”