"Enemies of freedom face the music. Come on boys, take them down!" the lyrics tout 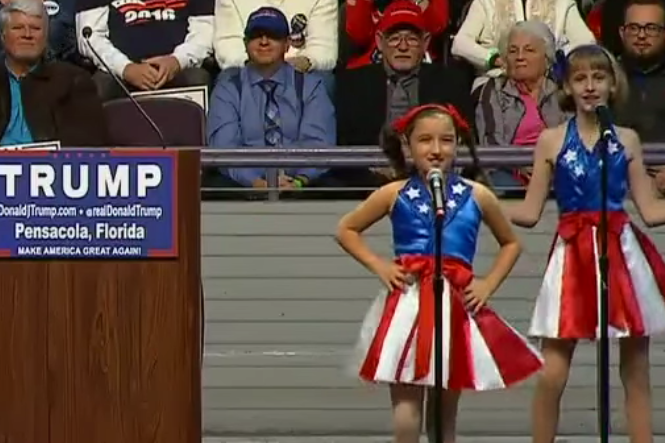 Watch what has been dubbed “the Official Donald Trump Jam.”

Just in case Republican presidential front-runner Donald Trump needed something else to deliver wide-eyed stares, a patriotic rally performance by a trio of pint-sized Trump supporters – dubbed "the Official Donald Trump Jam" – has been making the Internet rounds.

The ode was performed during a Florida rally Wednesday by three young girls who are part of a group called the USA Freedom Kids and was written by the father of one of the young dancers, Business Insider reports.

As Mother Jones noted, the tune may be a bid to land on the military's torture playlist. But before we share some social media commentary, watch for yourself.

Please stop sharing the video of those Trump rally "Freedom Girls" I have PTSD after watching it the first time.

Little girls singing abt crushing enemies of freedom at Trump rally is so cute... like soprano singing Hitler youth https://t.co/C1FC1DR8Bp

I would've been happier to never learn about the "Freedom Girls". It's my fault for clicking that link. Now I'm back to craving oblivion.