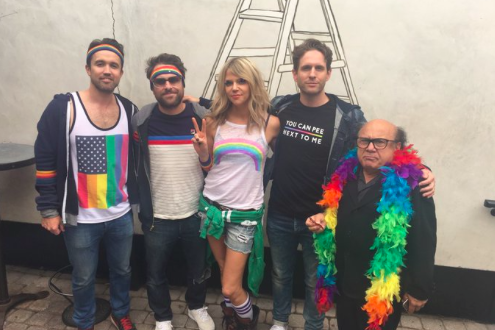 The cast of "It's Always Sunny in Philadelphia" at a gay pride parade in Los Angeles on June 12, 2016.

In the wake of the deadly massacre at Pulse nightclub in Orlando, millions have shown support and voiced their condolences for the victims of the attack on the LGBT community.

At pride parades throughout the country, citizens stood together in solidarity to celebrate sexual freedom and the principles of liberty that serve as the foundation of the American experience. Count the cast of "It's Always Sunny in Philadelphia" among those who showed up decked out in rainbow gear at the Los Angeles Pride Parade.

In the past, the show has humorously examined lifestyle issues in the gay community and has, in its own absurd way, encouraged people to come out without fear of being ostracized. In a 2010 interview with Greg in Hollywood, actor and executive producer Rob McElhenney talked about his experience being raised in a gay household and how it influenced his worldview:

“I happen to be pro gay marriage. I was raised partly by two gay mothers who have a domestic partnership in New Jersey. It’s not really the type of show that lends itself  to making political statements besides this is something that we should be talking about, that on both sides of the issue are human beings and that the less we treat each other as human beings, the harder it is going to be to find resolution. Ultimately what we feel very strongly about is opening up the conversation.”

Last month, McElhenney reached out to Aniyah Wolf, the Harrisburg high school student who was kicked out of her prom for wearing a suit, to invite her onto an episode of "It's Always Sunny in Philadelphia."

Forty-nine people were killed and 53 were wounded in Sunday's nightclub shooting, including 18-year-old Philadelphia native Akyra Murray, a former basketball star who was set to attend Mercyhurst College in Erie. Patience Carter, an intern at Philadelphia's FOX29, survived the shooting and is receiving treatment for a gunshot wound to the leg.

LGBTQ communities in Philadelphia and New Hope have planned a pair of vigils Monday night to honor all of the victims and reject the hatred that led to such a tragic display of violence.