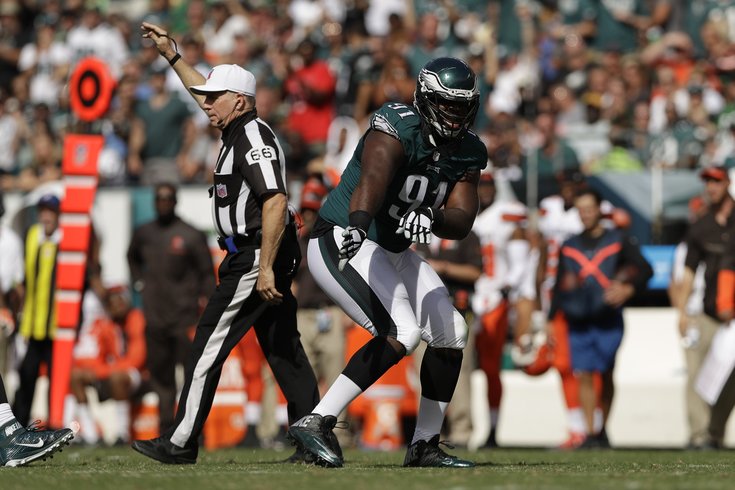 Philadelphia Eagles' Fletcher Cox celebrates one of his 6.5 sacks this season.

The Eagles were in danger of possible not having a player selected to the Pro Bowl for the first time since 2012. Instead, they'll send a pair of linemen -- one on offense and one on defense -- and could potentially send a few more as several Eagles players were named as alternates.

Left tackle Jason Peters has been named to ninth Pro Bowl -- he's made it each of the last nine seasons in which he was healthy, with the only exception coming when he was injured in 2012. That's also the most by an undrafted offensive lineman since the 1970 NFL merger.

Defensive tackle Fletcher Cox, who ranks fifth among NFL defensive tackles with 6.5 sacks, will also be headed to Orlando in late January after being selected for the second straight year.

“It’s an honor. It was definitely different [hearing the news for a second time]. It was just surprising with the year I've had, the ups and downs, that I made it," Cox, 26, said. "I just kept pushing. We were trying to get this team in a better position to make it to the playoffs. At this point, we're officially eliminated from the playoffs, so I'll look forward to going to the Pro Bowl and getting a chance to compete again.”

For Peters, it will be his seventh time representing the Birds, tying him with Brian Dawkins and Reggie White for the second-most in team history behind only Chuck Bednarik (8).

“That’s some great company to be mentioned with those guys," said Peters. "It just makes you think about all the hard work you put in and it makes you feel good about yourself because that’s some good company, the Brian Dawkins’ the Reggie White’s and all those guys. That’s crazy.”

It's not that crazy. He's just really good at what he does and has been for some time. Since 2007, only two offensive linemen have been selected to nine Pro Bowls; the other is Joe Thomas. For perspective, Fletcher Cox, now in his fifth season, was 17 in 2007.

“It just shows that a lot of guys respect Jason," Cox said. "He's been around for a long time. I've got a lot of respect for Jason – the way Jason works, the way Jason takes care of himself. He works hard. He pushes others to be great.”

Cox, who signed a lucrative, long-term extension in the offseason said all that money didn't really impact the way he approached playing football.

“Staying humble has been the key throughout the whole process," he added. "At any point, if you get too comfortable, that's when you start to lose that edge. If you have the right demeanor and the right attitude, the positive vibe will take you a long way.”

The Eagles also have a handful of alternates, or guys who could make the Pro Bowl if the players above them are injured, playing in the Super Bowl, or decline for some other reason.

I see you, Brandon Graham.