Jersey Shore-Town Power Rankings: Through the third weekend of June 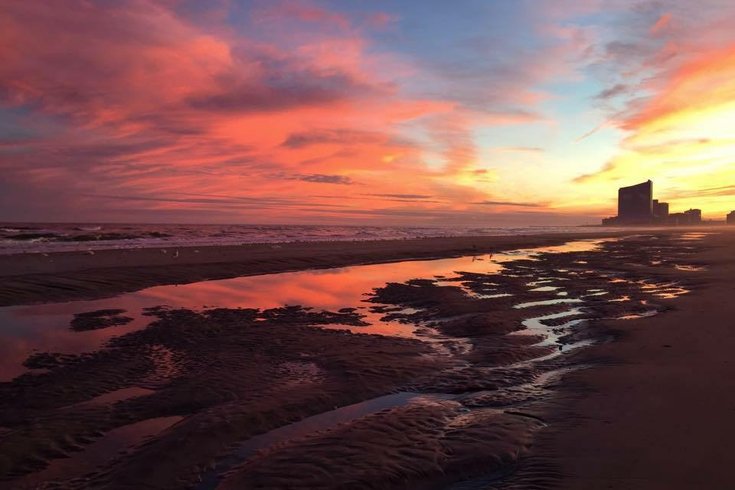 Brigantine resident Mollye Lange sent several photos from the beach for consideration in the definitive shore-town power rankings. This one of a sunset was with the note 'Brigantine has the BEST beaches.'

We’re several weeks into the Jersey Shore summer season (though it wasn’t officially summer until today), and we’re creeping ever closer to July, Labor Day and the darkness of winter.

But let’s not get bogged down with all that now.

Nope. Let’s enjoy summer while it’s here and afterward pass judgment upon 16 shore resorts that become a second home to many Philadelphia area folks when the sun gets hotter.

We’ve seen some shifting statuses over the past week. These transitions were detected and edified by a Definitive Shore-Towns Power Rankings algorithm that dispassionately and scientifically examines a number of very important criteria.

So, let’s see how it stands today:

15. Ocean City (-10) A week-old link showed up on Twitter during the third quarter of the seventh game of the Golden State/Cleveland NBA-championship series. “How Are You Paying For Your Summer Vacations?” the headline read. “Nanny state judgmentalism, much?” was how the DSTPR interpreted the tone of said question. I did not read further — duh, Game 7 was on — but the inclusion of an Ocean City beach sign in said link cost the family resort substantial standing this week.

12. Atlantic City (+4) Sure, casino workers voting for a strike is not a good thing for the visiting public. Neither are sewage-related disputes. So how exactly did A.C. gain positive momentum this week? By discussing legalized weed, expanded Boardwalk-bicycling hours and catching a drunken (alleged) hit-and-run driver minutes after the crime was committed, that’s how.

11. Cape May Point (even) Unlike previous weeks when slow and sleepy defined the race, the Point gets daps this week for the Cape May Lighthouse Full Moon Climb, which takes place tonight (Cape May Point State Park; $8 for adults, $5 for children). Should an attendee send photos in from said event — nudge, nudge — the Point may enjoy upward mobility in next week’s rankings.

8. Brigantine (-5) Remember the substantive leap that Brigantine took last week on account of a former resident emailing about all the island’s benefits? Yeah, we do, too. We also remember the dozens of other emails that appeared in the time since. The DSTPR mainframe does not take well to overzealous ballot-box stuffing and, as such, Brigantine slides to the middle of the pack again. (Caveat: The photos sent in by Brigantinean – DK if that’s what Brigantine residents are really called, but it sounds about right — Mollye Lange speak to the beauty of the place.) You have been heard, Brigantine; just let up on the gas a little bit, k?

5. Strathmere (-3) You say your Fishing and Environmental Club is chipping in for a jetty in the waters separating you and Ocean City? Cool, cool. But not as substantive as occurrences in the locales that leapfrogged you this week.

1b. Wildwood (+9) Sometimes the algorithm picks up on stories from outside of the area in compiling its weekly definitive rankings. Such is the case with the story of Jason Gonzalez, a 2001 graduate of Wildwood High School, who survived the Pulse nightclub massacre. Said his mother Ivette, a Wildwood resident and elementary-school secretary, “I’m so grateful my son is alive.” We are too, Ivette.

1a. Wildwood Crest (+5) As someone who knows the struggles inherent in recovering from a traumatic brain injury all too well, the story of Jack Cavanaugh Jr. and Sr. resonated profoundly with me. And considering that the 10th annual They Will Surf Again event in Wildwood Crest played such a meaningful part in his/their recovery, it represents the type of healing redemption that we all seek from our days and hours by the sea. Keep on keeping on, Jack, Jr. There will be tough days, but they will bring you closer to being whole.

James Clarke was sitting with his wife Jane — "my bride," he always called her — reading books on the beach on the evening of June 5 at the end of a weekend away from their Watchung home.

A friend of his teenage son had scrambled out of the surf. Peter Clarke, 15, and two other boys were caught in a riptide. One had sucked saltwater into his lungs.

James, whose friends called him Jimmy, dropped his phone and his copy of "Factory Man" and dashed into the waves to rescue them. Within moments, he and the boys had made it back to shore. But the 55-year-old Jimmy faltered, stopped and then collapsed, dead of an apparent heart attack, his wife said.

Jane and Peter said he died a hero that day, but that cold comfort did nothing to fill the void left by his absence.

RIP James Clarke. Your loss is tragic, but what you did before passing was the height of heroism.