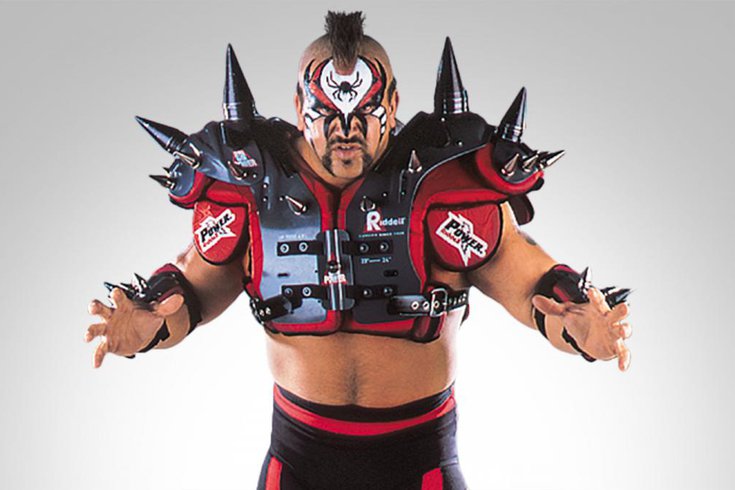 Joe Laurinaitis, pictured above as pro wrestler Road Warrior Animal, died at the age of 60, his family said. The Philly native and WWE Hall of Famer was remembered on Wednesday by figures across the wrestling world.

WWE is saddened to learn that Joe Laurinaitis, known to WWE fans as Road Warrior Animal, has passed away.

At this time, we would like to confirm the passing of Joseph Laurinaitis aka Road Warrior Animal at the age of 60. The family is planning to release a statement later today. At this time we ask for you to keep everyone in your thoughts and prayers. #OhWhatARush

Laurinaitis' wresting career spanned decades, but he was best known for his work alongside partner Mike "Road Warrior Hawk" Hegstrand, who died at the age of 46 in 2003.

The Road Warriors were so great at promos - such intensity#RIPAnimal

The tag-team duo had stints in both WWE and WCW, and during their heydey in the 1990s, won titles in 1991 and 1997. They embraced a raw, physical style of style wrestling and stood out for their face paint and shoulder spikes. Animal captured a third tag team title in 2006 when he partnered with Heidenreich.

Laurinaitis, Hegstrand and their manager, Paul Ellering, were all inducted into the WWE Hall of Fame in 2011.

Wrestling legends shared their condolences and remembered Laurinaitis on Wednesday.

I Am More Than Saddened To Hear Of The Loss Of My Good Friend And GREAT Opponent Joe Laurinaitis Of The Legendary Road Warriors. They Were Iconic! The Road Warriors And The Four Horsemen Drew More Money And Had More Fun And Entertained Fans Worldwide At The Highest Level. RIP 🙏🏻 pic.twitter.com/eiZ2udqGNm

RIP Animal,love you my brother, I know you and Hawk have a lot of unfinished business to take care of! God speed and blessings to your beautiful family,one love4Life. HH

Just found out that Road Warrior Animal has left us. Very sad to hear this, always such a nice guy whenever I would see him. So, I have a Tasmanian Devil tattoo on my right arm, he was my inspiration to get that before I started wrestling training. #RIP pic.twitter.com/iynxmE8pkb

MY ROAD WARRIOR ANIMAL BROTHER. YOU WERE MOST OVER TAG TEAM EVER. WE HAVE THE BEST TIME IN THE MINNESOTA FOREVER I LOVE YOU. RIP BUBBA pic.twitter.com/dLzAy2uRaa

My mind is blown. One of the greatest dudes ever. Road Warrior Animal kicking ass in heaven with Hawk pic.twitter.com/mJy5JzJxpw

Laurinaitis' brothers, John and Marcus, were also pro wrestlers and later served the WWE in various roles. His son, James Laurinatis, was a standout college football player at Ohio State University who went on to play eight seasons in the NFL before retiring in 2017.