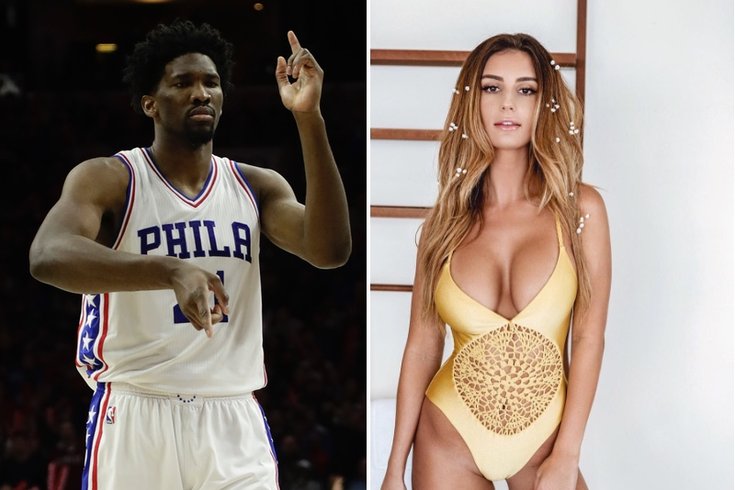 One of the creepier but still socially acceptable things on the internet is when people take the time to comment on social media pages of so-called Instagram "models" -- congrats on being famous for doing the same thing as that pizza I ate that one time: being hot and looking great on the internet with the help of a filter.

Like, what exactly are you expecting to get out of this transaction? Hey, you know what, maybe I'll see if that guy with the dog in his avatar who told me I was beautiful wants to go out sometime.

The only time it isn't sad, however, is when the person commenting isn't a person at all. At least not a normal person. See, when it's a 7-foot-2 professional basketball player with a penchant for using Twitter to hit on celebrities -- again, I use that term loosely here -- it becomes funny and endearing.

And that's exactly what happened over the weekend when Sixers center Joel Embiid, who just last week was linked to another model, commented on Bianca Ghezzi's live stream. Thankfully, Busted Coverage was able to screen-grab what Embiid had to say.

[And if my intro didn't give it away, some may find parts of these comments offensive.]

But that was only the beginning for Embiid, who decided to channel his inner-Rex Ryan for his next request.

Are you guys starting to see what I mean about how creepy these things are? And there are hundreds of people watching. Why, I'll never know.

Luckily for Embiid, his friend (and future Eskimo brother?) Johnny Manziel was able to accomplish that. Perhaps the former NFL quarterback has some advice for him

With Embiid out for Monday night's make-up game against the Kings (and likely to miss the team's upcoming road trip) with a left knee contusion, the Sixers rookie and all-star snub will have plenty of time spend drinking Shirley Temples and checking out his social media feeds. So it's a pretty safe bet that this won't be the last time we hear from him this week.

A silver lining to his recent injury? Perhaps.