Sixers rookie Joel Embiid had plenty of time to hone his social media skills while he spent the last two seasons rehabbing an injured foot. And, boy, is he good.

In fact, he may be better at social media than he is at basketball -- and that's saying something, because he's pretty darn good at basketball.

While he continues to campaign for a spot in next month's NBA All-Star Game (and a date with his celebrity crush, Rihanna), Embiid's Twitter and Instagram game has done almost as much for his chances of representing the Eastern Conference as his on-court play.

Especially when it comes to shutting down the haters.

Following Sunday's win over the Nets, in which Embiid scored 20 points, the 22-year-old center posted a photo to Instagram of him posing alongside teammates Nerlens Noel, Ben Simmons, and Philly rapper Meek Mill.

That post caught the eye of adult film star and Washington Wizards fan Mia Khalifa, who has been known to trash talk athletes on social media (as well as blow up their spot if they try to slide into her DMs). She reposted the photo with the caption, "Room full of Ls," because, you know, the Sixers have lost a bunch of games. 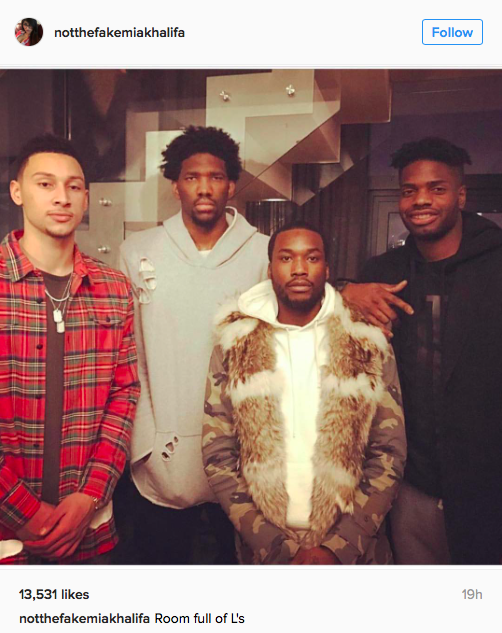 Embiid, not to be outdone, posted a comment on the photo that left the adult film star, who usually gets the last laugh, speechless.