Ever since the all-star voting process (pun not intended) began about a month ago, Sixers center Joel Embiid ran an all-encompassing campaign. Although he fell a little short of a starting spot in the NBA All-Star Game next month in New Orleans, it wasn’t because of the fan vote.

One of the “platforms” that the social media savvy Embiid ran on was the idea that if he became an all-star, his celebrity crush would finally pay attention to him. Was it Rihanna, who he frequently courted on Twitter? Maybe not.

There is my chance to finally be with my CRUSH so i need your help y'all ha..... Joel Embiid #NBAVote https://t.co/lzxoKq2n10

Embiid isn’t an all-star yet and he hasn’t revealed the identity of his crush -- it remains to be seen if that ever happens -- but recently it does seem he has at least been hanging out with Canadian model Danielle Knudson.

After Friday night’s win over the Portland Trailblazers, Embiid made the location on his Instagram post “Danielle’s” in addition to tweeting “Danielle is the real MVP”: 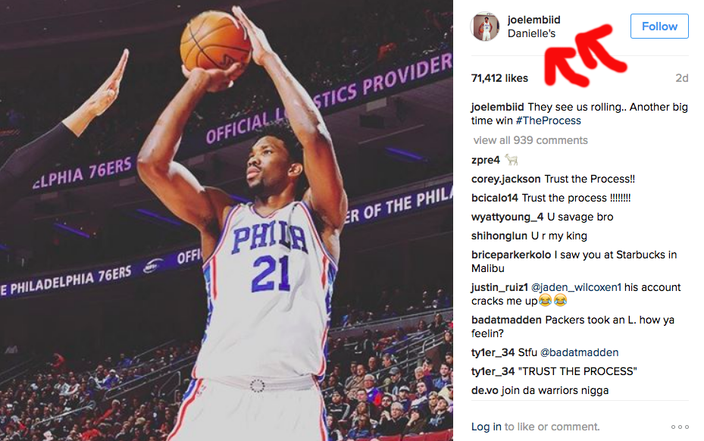 Danielle is the real MVP

Sixers Reddit was the first to make the connection to Knudson, who was spotted sitting courtside for Friday’s game. In fact, it also appears if she was at the Raptors game on Wednesday:

CSN Philly found some footage of Embiid after the game talking to Knudson, too:

The 27-year-old Knudson, who models for GUESS and has an impressive 294,000 followers on Instagram (still about only half as many as Embiid), was at least as of last summer dating fellow Canadian Milos Raonic, currently the No. 3 ranked tennis player in the world.

Hey, maybe Knudson is still linked Raonic even though they stopped posting about each other on social media a few months ago. Maybe she isn’t Embiid’s celebrity crush. Maybe they're just friends. But it does seem pretty safe to say that Knudson was at the Wells Fargo Center last week because of none other than Joel Hans Embiid.