...and who could blame him? 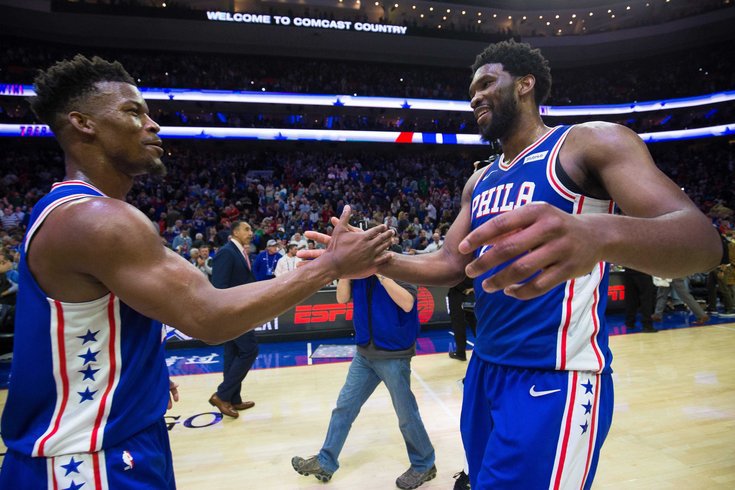 Jimmy Butler played perhaps the best game of his career on Monday night, scoring 40 points in a Game 1 win over the No. 1 seeded Bucks. A lot of people tuned in for the big Heat win, including Sixers franchise center Joel Embiid.

As Butler was in the process of taking over down the stretch, Embiid sent out his first tweet since the Sixers were sent home from the playoffs. Cryptic though it may have been, it seemed pretty obvious he was watching the same game as everyone else:

Once Butler put the finishing touches on the series-opening win, Embiid removed all doubt about what he could have been referring to. The big man, it seems, thinks the Sixers would be better off with Butler around:

It's hard to disagree with him, and it's quite a twist after many Sixers fans wished Butler well in "retirement" last summer. Last offseason, the Sixers assembled a roster, at least in part, around the idea that they would have to beat Giannis Antetokounmpo and the Bucks to make the NBA Finals. In the real world, the Sixers got swept out of the playoffs before they even had a chance to meet the Bucks, while Butler is three wins away from knocking them out of the playoffs himself.

Embiid has not been shy about his desire to keep Butler in the fold. In February, with the Sixers languishing in fifth place in the Eastern Conference, Embiid sparked a mini-controversy with a back-and-forth on Instagram with Butler, less than a week after claiming this year's Sixers had no offensive identity.

He would later downplay the significance of his actions, but things really took off when he joined JJ Redick on The Old Man & The Three podcast in early August, explaining his season-long frustration with the moves the team made last offseason.

I won’t lie, during the season I was not myself. I was not there. I just wasn’t comfortable. The offense wasn’t the same, basketball was not the same to me. The way things happened last summer, it was just so frustrating, so I was kind of mad at the whole world and I was just like, ‘Eh, whatever. I’m just coming to work and I’m going to do my best,’ but I wasn’t playing up to my standards.

And it was hard. It was a big change, but you adjust. Every year is going to be different, and this year was different. But I still believe. We’ve got a big chance to make it happen. We can win the whole thing.

Offensively, it just wasn’t there. We had our offense, but at times it was not the right offense. The offense we’ve been using the past four, five years, that wasn’t the offense for this team. It was completely different. You don’t have a JJ Redick, you don’t have a Jimmy Butler who’s going to do the pick-and-rolls. But I think we’re getting it. I think the last month that we spent in the bubble has helped us a lot. I think we’ve come closer.

(Narrator: the Sixers had not come closer.)

It's easy to dismiss this as lighthearted trolling from a guy who likes to have fun with social media. But this is not just a fly-by tweet with no additional context. Embiid was visibly down during the season (in both production and demeanor), openly stated he was upset because of the personnel decisions made by the front office, and has more reason to doubt the outlook of the team than ever. You, the fan can choose not to take it seriously, but the Sixers do not have that luxury.

It's an oversimplification to pin Butler's exit on any one person. Before he ever arrived in Philadelphia, Butler's reported preference was a trade to Miami from Minnesota — a trade that was nearly completed before falling apart in the fall of 2018. Even with a perfect year and the full-court press from Philly, he might have left regardless.

That perfect marriage never existed, even if the particulars are still muddy a year-plus later. Brett Brown and Butler were not the best of friends, Ben Simmons was not enamored with the on-and-off court repercussions of Butler being in Philly, and the front office thought there was a better way to build the team to save Embiid's legs and wear teams down in the playoffs. Choosing Butler over Brown or a front office that has failed in spectacular fashion in recent years is one thing.

The Simmons issue is another matter entirely, though with Simmons getting on board with a switch to forward late in the year, perhaps even that could have been smoothed over. I tend to believe that's not how it would have played out in the alternative universe where the Sixers could have retained Butler, but you never know.

In any case, those points almost don't matter. The reality of the situation is the Sixers are a worse basketball team than they were a year ago, Butler continues to turn in big-time performances in the playoffs, and the front office who engineered last offseason hasn't made a meaningful change yet. Worst of all, Philadelphia's current franchise player still hasn't seemed to let go of the fact that Butler left.

Can you blame him?