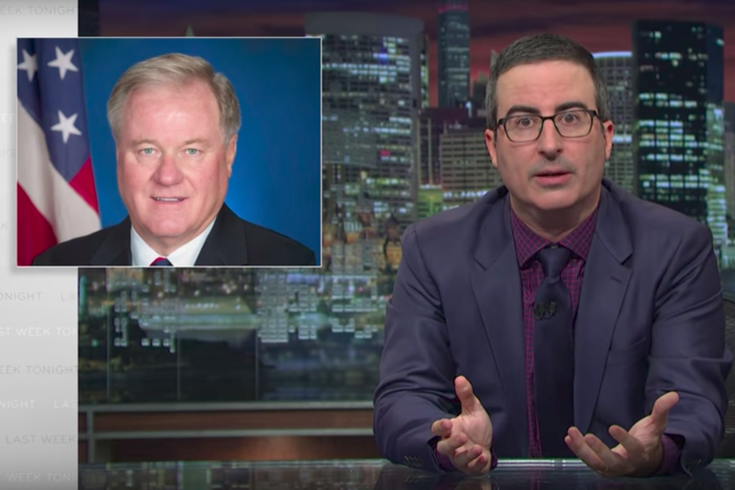 John Oliver, host of HBO's "Last Week Tonight," had a lot to say on his Sunday night show about President Donald Trump's plan to pull the U.S. out of the Paris global climate pact.

Pennsylvania got the spotlight, too – though it wasn't all good.

Oliver took about 20 minutes to break down the week's events and why he believes that Trump's decision is a detriment to not just the country, but the world.

The host, who hails from Britain, wrapped up the segment by telling viewers that it's now up to local politicians to help ease the effects of climate change.

Trump said that he was "elected to represent the citizens of Pittsburgh, not Paris" while pulling out of the agreement, which didn't sit well with Pittsburgh Mayor Bill PeDuto and, therefore, got a shoutout from Oliver.

PeDuto went on CNN to respond to the comments and said he would stick to fighting climate change, and that the majority of Pittsburgh voted for Democratic nominee Hillary Clinton.

Trump: I was elected to represent Pittsburgh, not Paris
Pittsburgh mayor: We voted for Clinton w/ nearly 80% of vote https://t.co/a1D7oyLA6t

While Oliver praised PeDuto, he slammed state Sen. and gubernatorial candidate Scott Wagner, R-York, who suggested that "warm bodies" may cause climate change back in March.

"The onus is now on politicians at the state and local level to do what Donald Trump cannot be bothered to," Oliver said. "... you'll have to find out who they are, but then you will need to find out their position and look, maybe you'll get lucky; maybe yours is great. Or, maybe you live in Pennsylvania and you're represented by state Sen. Scott Wagner, who has an interesting theory for what might be causing global warming."

After elaborating on the theory, Oliver continued:

"I don't even know where to begin there. I mean, yes, the Earth does move closer to the sun every year, but then it moves further away from the sun because that is what a f---king year is. Our body heat is not warming the planet, and we are clearly not doing the best we can because we keep putting idiots like Scott Wagner in positions of power."

Wagner's office did not respond to an immediate request for comment.

Watch the full clip, which contains profanity, below: