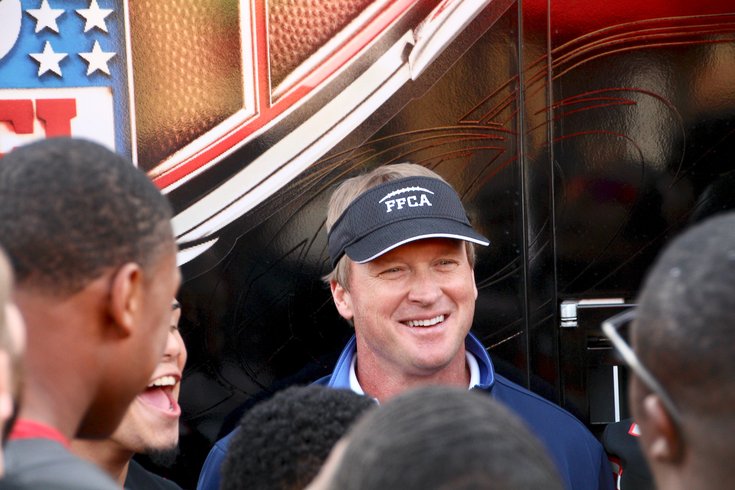 While speaking to the crowd of local high school players and coaches gathered at PDQ restaurant in Cherry Hill on Saturday, former NFL coach and current Monday Night Football analyst Jon Gruden realized something wasn't right and paused before continuing with his speech.

"Hey, who's got my Super Bowl ring? Somebody out there's got that ring," Gruden said with a laugh as a player from Lenape High School raised his arm and handed him the ring, which was making its way through the audience for a quick photo-op.

Once safely back on his right hand, it was on with the day's mission. And on this day, that meant giving back to area programs as part of Gruden's Fired Football Coaches Association (FFCA), which started back in 2008 after he was let go by the Tampa Bay Buccaneers.

“I’m just here to encourage them to finish strong," Gruden said. "I’m a big fan of football; I’m going to try to show some support for them, encourage them to finish their season strong. Take coaching hard. If they’re going to play football in the future, or come back next year, challenge them to get better in the offseason and remind them what a great game football is and what benefits they’re getting from it, even though they might not know it. Sportsmanship, teamwork, mental and physical toughness, dedication – all the things that are intangibles that you’re looking for, they’re getting by playing football.”

But Gruden wasn't just giving advice – he also gave shirts to all the players and coaches in attendance. More importantly, the FFCA gave each of the three schools in attendance (Lenape, Vineland and Pennsauken) a check for $4,000 to use towards improving their programs.

He also spent time walking around the restaurant and talking to players and coaches, signing autographs, taking pictures, and offering advice to anyone willing to listen, which was pretty much everyone. 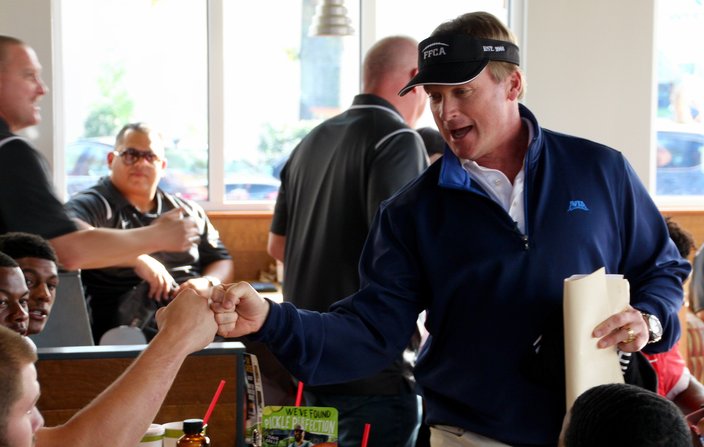 Gruden walks through the crowd at PDQ, stopping at each table to talk to the players and coaches gathered.

Gruden has been hosting these events in different cities for several years, but the former Eagles offensive coordinator had never made it back to the Philly area for one until this weekend. However, with the Birds hosting the Redskins on Monday night, Gruden was able to make it happen – and right down the road from where he once lived.

And like any good public speaker, Gruden played to his audience, using Eagles quarterback Carson Wentz as an example of the way these teenagers should play the game. Wentz is a former student at Gruden's QB Camp on ESPN and it's no surprise that Gruden is a big fan of the 24-year-old passer, who has a 13-3 touchdown-interception ratio through six games this season.

“The one thing about Wentz, he’s as tough as any guy I’ve seen in this league in a while," Gruden said, pointing to a specific series in the Birds' Week 5 win over the Cardinals when Wentz was popped by Brandon Mebane, only to come back and deliver a huge throw on the very next play. "The other thing I love about Wentz is his preparation is off the charts. This guy works at it hard. He studies, he’s really into it, and when he goes out and practices, it’s like a game. He is really into football, man.

"I challenge you guys out here today, when you go back and start practicing, you remember Carson Wentz."

But it isn't just his toughness and work ethic that Gruden likes; he also thinks Wentz is a heck of a quarterback.

“He’s throwing the ball at a high level," Gruden said. "He’s seeing the field well. He’s making changes at the line of scrimmage. And he’s making plays – and making plays in critical situations, third down. When you’re No. 1 in the NFL on third down, that says a lot.

"So he is making a rapid ascent, no question. And they’ve improved their personnel around him too in Year 2.”

That improved personnel, along with Wentz's year-over-year growth, has the Eagles off to an NFL-best 5-1 start. But according to Gruden, that shouldn't be too shocking to anyone who's been watching football for any considerable amount of time.

“I’m not surprised by anything in the NFL anymore," he said. "It’s a long way from over – and injuries play a big part of it, the way we practice plays a big part of it – but I don’t think anybody in the NFL right now is the clear-cut favorite to win the Super Bowl. But I’m not shocked [by the Eagles’ start]. They’ve got a lot of good players; they really do.”

Having the players is one thing – the Eagles have had good rosters before – but it isn't just Wentz coming into his own in his second year. This season has also seen head coach Doug Pederson come into his own after facing much criticism in Year 1.

“He’s done a nice job," Gruden said of Pederson. "No. 1, he’s hired a really good coaching staff, and that’s a credit to him. And secondly, they’ve developed some players. [Nelson] Agholor is playing better. Wentz is playing better. He’s put an offense in that’s balanced, that works. You’ve got to give him credit for that. And they’re in first place, so how much credit can you give the guy, right?”

A win on Monday night and the Eagles could create even more space between themselves and the rest of the NFC East. They'd also solidify their spot as not only one of the best teams in the NFC, but one of the best in the entire NFL.

With his brother, Jay, on the other sideline coaching the Redskins, Gruden was hesitant to make a prediction for the Redskins game. But reading between the lines, it sure sounds like he's expecting an Eagles victory.

“I don’t make predictions. My brother coaches the other team, so I think Philadelphia, at home, starting a three-game homestand, should be the favorite," he said. "They’re playing extremely well. They’re a good defensive club. No one talks about it. They know how to stop the run; they know how to rush the passer. And their quarterback is red-hot. So it’s going to be tough.”

Following his talk inside PDQ, Gruden invited the crowd outside to take pictures in front of the Monday Night Football bus in which he arrived and had the students place team stickers next to the giant logo on the side.

And as he joined each team in its own chant, it was easy to forget that this was a Super Bowl winning coach and professional broadcaster. Until, of course, the sun caught one of the diamonds on his massive ring, now safely back on his hand.