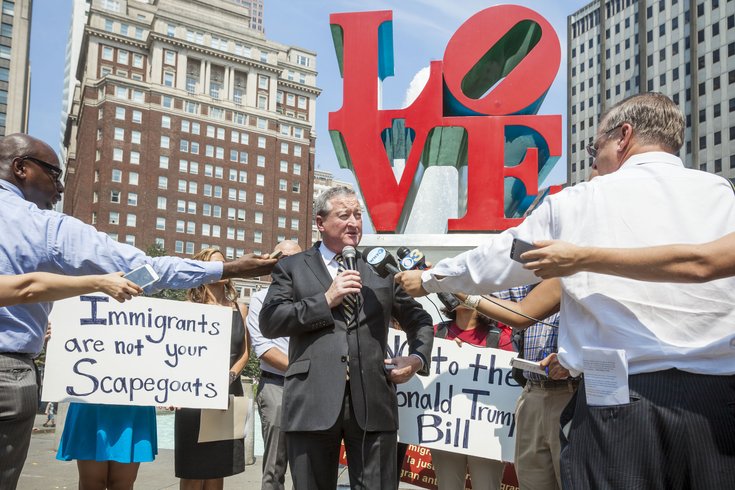 A judge has ruled that U.S. Attorney General Jeff Sessions cannot withhold federal funds from the City of Philadelphia because of its status as a so-called "sanctuary city."

In his ruling, U.S. Eastern District Court Judge Michael Baylson said the city had presented a defense of its policy as well as statements and witnesses at an evidentiary hearing to stress why it needs the funds.

Conversely, Baylson wrote, the Department of Justice presented only two declarations at the hearing and no detailed evidence to show how Philadelphia’s sanctuary city status would harm immigration enforcement.

Philadelphia sued Sessions in August over his threat to add new conditions to a federal grant program that would require sanctuary cities to reverse their policies in order to receive the money. A sanctuary city, generally speaking, is a municipality that refuses to hold or hand over undocumented immigrants to federal immigration officials unless they have an arrest warrant.

Supporters of such policies, including Philadelphia Mayor Jim Kenney, argue they help improve relationships between immigrant communities and law enforcement, while opponents say sanctuary cities allow dangerous criminals back onto the street.

“I am gratified that the Judge recognized what the City has maintained all along," City Solicitor Sozi Pedro Tulante said in a statement. "We are in compliance with federal law, and attaching immigration-related conditions to a grant having nothing to do with immigration is harmful to Philadelphians’ safety.”

Kenney and Tulante addressed reporters on the decision in a press conference late Wednesday afternoon.

"I believe most of this had to do with them telling us to do something and we said no," Kenney said. "And then a judge finally said we had a right to say no."

The mayor also said the ruling benefits all Philly residents.

“Our police officers and criminal justice partners will receive much-needed federal funding, and our city will be able to continue practices that keep our communities safe and provide victims and witnesses the security to come forward," he said.

Philadelphia presented anecdotes and statistics to support the assertion that its policy protects the public interest by fostering community cooperation with police, specifically when those immigrants are victims or witnesses to a crime, the judge wrote.

Sessions had argued that the potential funds from the Edward Byrne Memorial Justice Assistance Grant program — aka JAG funding – for Philadelphia could only be as high as $1.6 million, representing a tiny fraction of the city or even the police department's budget.

The city showed in court how it planned to use the extra $1.6 million on initiatives such as a "dramatic expansion" of the availability of naloxone, an antidote used to reverse opioid overdoses. Baylson noted that while Philadelphia police administered the life-saving drug about 300 times last year, overdoses still accounted for about 900 deaths in the city.

In his conclusion, Baylson waxed poetic about the very nature of federalism and its relationship with local governments, invoking Greek mythology and Biblical references to state that federal government doesn't have free reign on deciding qualifications for distributing money to municipalities.

"The operatic hero Orfeo was allowed to escape Hades with his deceased and beloved Eurydice, conditioned on his not looking at her, but when he does, she dies; Mephistopheles grants Faust eternal knowledge and pleasure on the condition that Faust surrender his soul; and Salome, the title character demands the head of St. John the Baptist as a condition to dance for King Herod," he wrote.

"However, in real life, the Courts, in interpreting the Constitution, and Congress in enacting laws, as detailed at some length in this Memorandum, have interposed restrictions on the Executive’s ability to impose conditions on the transfer of benefits to local governments."

"The supremacy clause of the Constitution gives the federal government the final say – if, as, and when there is a conflict. In this case, given Philadelphia’s unique approach to meshing the legitimate needs of the federal government to remove criminal aliens with the City’s promotion of health and safety, there is no conflict of any significance."

Baylson's ruling echoes a temporary, nationwide injunction issued in September that said Sessions had likely overstepped his authority with the new conditions for the grant money.