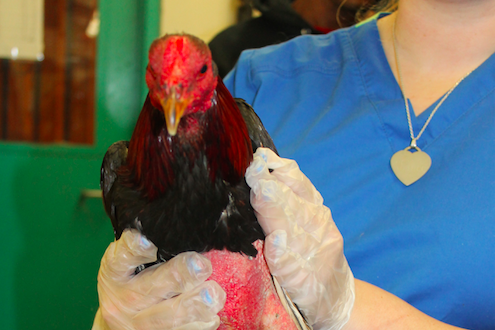 Officials became aware of the possible cockfighting operation while investigating an unrelated case near Reyes' property on the 2800 block of North Lee Street. On March 1, after obtaining a search warrant, PSPCA Humane Law Enforcement officers seized a total of 36 birds, including fighting roosters and hens, in addition to animal fighting paraphernalia.

All of the birds seized were transported to the PSPCA's Erie Avenue Headquarters to be evaluated by the organization's forensic veterinary team. Those that could be rehabilitated were sent to rescues.

“The Pennsylvania SPCA is the only animal welfare organization in the region equipped to handle large, complex cases of animal fighting like this,” said Jerry Buckley, CEO of the PSPCA. “Animal fighting is a brutal crime, and we hope through the prosecution of cases like this, we can deter future offenders from participating. We are grateful for the new paraphernalia legislation, which is important in identifying those who are performing acts of animal cruelty, or intend to. We look forward to adjudicating this case and getting justice for all the animals involved.”

Anyone with information about this case, or other cases involving animal cruelty, is asked to call the Pennsylvania SPCA’s Cruelty Hotline at (866) 601-SPCA.