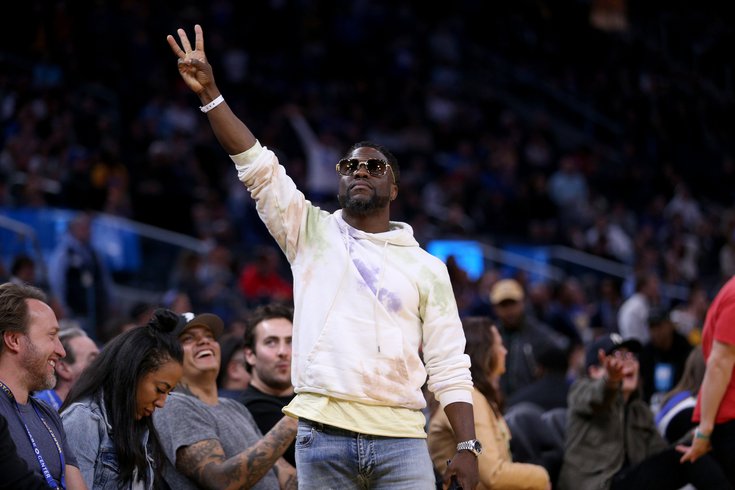 Kevin Hart said that he wants 'to show a Black father in a positive light' in the upcoming film 'Fatherhood.'

When viewers sit down to watch "Fatherhood" starring Kevin Hart, the comedian will be appearing in a role that is quite different from what fans have grown accustomed to seeing from him over the years.

Hart displays some serious acting chops in the comedy-drama film, set to debut next month. The actor said during an appearance on "The Tonight Show" on Tuesday that he took the role in order to change how Black fathers are typically portrayed in movies and television shows.

"For me, to take on the role, it gave me the opportunity to show a Black father in a positive light," Hart said. "For some time, on the screen, on TV, if [Black fathers are] not getting out of jail or on drugs or off drugs, there's a significant struggle behind the image of a Black father. This is an opportunity to just put it in a space of positivity, and that was my reason for taking on the role. And also challenging myself to go a little deeper in acting. It's a serious story. It's emotional and has its waves. So I'm excited about the journey I'm about to take my audience on."

"Fatherhood" tells the story of a widower, played by Hart, who is dealing "with doubts, fears, heartache and dirty diapers" as he raises his only daughter by himself.

The film is an adaptation of the 2011 book "Two Kisses for Maddy: A Memoir of Loss and Love" by Matthew Logelin. The memoir is about the author's experience of losing his wife after she gave birth to their only child.

The cast includes Lil Rel Howery, Alfre Woodard, DeWanda Wise, Anthony Carrigan and Paul Reiser. Paul Weitz, who worked on hit movies like "American Pie" and "About a Boy," is the film's director.

"Fatherhood" will be available to stream on Netflix starting June 18, just two days before Father's Day.

What may also be inspiring Hart's forthcoming role is his own personal experiences as a father. Hart and his second wife, Eniko Parrish, had their second child together last September, a girl named Kaori May.

A father of four, Hart said that being a dad "is a feeling like no other."

"It's insane sometimes when you're in the home and you look around you and you look at this thing that now exists that has such a tight and close-knit bond," Hart said. "I didn't come from the mom and dad in the same household and the family that ate dinner every night. So the fact that I've broken the mold and created that and started that, it means a lot. It means the world to me and I love to see it."

Along with his new movie, Hart will also be releasing a new children's book called "Marcus Makes a Movie" next month. The 208-page illustrated novel tells the story of a boy who has a dream to make a blockbuster superhero film.

Hart hopes that the book will inspire kids to chase their dreams just like he did.

"This is really an opportunity to motivate and inspire our youth," Hart said. "I feel like this generation needs to truly understand that the word 'no' is just that. It's a word, and our stories are very important. I heard 'no' a lot on my journey. The road to success is a long one. A lot of doors get closed in your face. A lot of roads have blocks at the end of them, and you gotta figure out ways around them. And that's what life is about. It's about pivoting. It's about understanding that your dream is just that, it's yours. Your belief in you and your understanding of what you can is just that, it's yours. And nobody can ever tell you that it's not true. Nobody can ever tell you it's not good enough."

"Marcus Makes a Movie" is available for preorder and will be released June 1.

"Tonight Show" host Jimmy Fallon also poked fun at "Mare of Easttown" again, as the murder mystery show was a subject during a recurring game called "Good Name, Bad Name, Great Name." The segment consists of Fallon going through a list of names and saying what each is good, bad or great for.

Fallon said "Mare of Easttown" is a good name for an HBO show, a bad name for a racehorse and a great name for a drunk guy at a bar in Philly.

Last week, Fallon made fun of "Mare of Easttown" during a segment where he shared snippets from podcasts that don't actually exist. One of the fake podcasts was called "Cher of Easttown," which was teased as a scripted murder mystery starring Cher as a hard-boiled detective from a small town in Pennsylvania.

Set and filmed in Philly's western suburbs, the show has followed detective Mare Sheehan, played by British actress Kate Winslet, as she seeks to solve a murder and two missing persons cases while navigating many family struggles and dual love interests in her personal life.

The series finale of "Mare of Easttown" will air this Sunday night at 10 p.m. on HBO and HBO Max.