"I'm a good person ... If you don't see that, then that means that it's a problem with you," the comedian told Michael Strahan 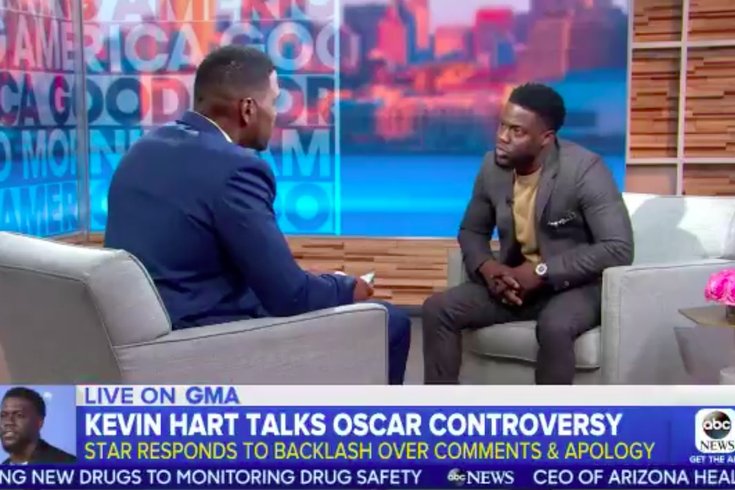 Michael Strahan interviews Kevin Hart on "Good Morning America" to discuss Hart's decision not to discuss the Oscars after the comedian's past homophobic tweets resurfaced. "I'm over it," he said.

After an appearance on "The Ellen DeGeneres Show" that did little to boost current public opinion, Kevin Hart went on "Good Morning America" on Wednesday to once again discuss the ongoing controversy surrounding his past homophobic tweets and his non-hosting of the Academy Awards.

In a conversation with Michael Strahan, however, Hart dodged nearly all questions by saying he is done with addressing the issue.

"If (the apology) is accepted, great," the North Philly native said. "If it's not, it's nothing I can control. Some things are left out of your hands, so, I'm done with it."

When asked how he's evolved since writing the tweets that were posted between 2009 and 2011, Hart said he is done with explaining it and that he has already addressed it several times over the years, including during the recent "Ellen" appearance.

"I have an understanding that I've addressed it, and I've said everything that I can possibly say. So I'm over it. You will not hear me say anything else about it," Hart said.

"I want everybody to know I'm done with it...I'm not addressing it anymore..."@KevinHart4real on the #Oscars controversy and backlash over past homophobic comments, jokes and tweets: https://t.co/H7qgNuSWji pic.twitter.com/9ivjnrbMut

When asked how he would react if his son came out as a gay, Hart gave similar answers.

He later continued, "What more do you want? You want blood? You want arms?"

In regards to the Oscars, Hart once again said that he will not host this year but did not close the door to hosting it in the future.

Q: "Is there hope that you would host the #Oscars this year?"@KevinHart4real: NO. pic.twitter.com/ivwbW5ygUs

"Right now, from a time perspective, I don't have the time. You're talking about two weeks that I would really have to prepare," he said.

"Unfortunately, I can't do it this year, it's not going to happen ... the public has made it a conversation of today, but I have removed myself from the conversation. It's just not right. It's not in God's plan right now."