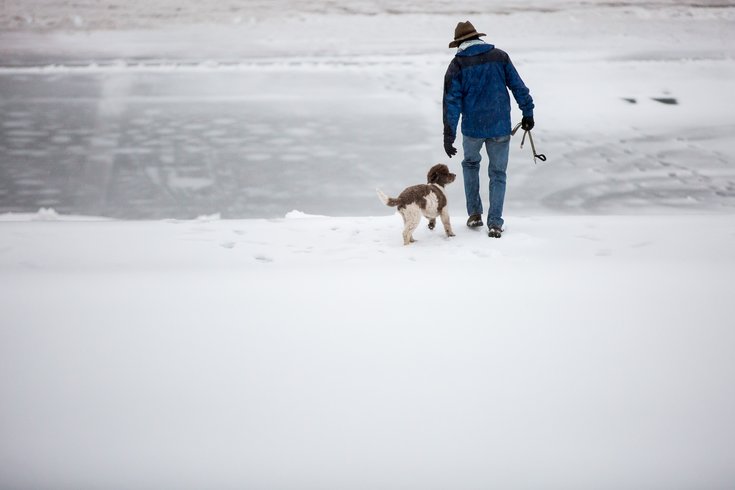 A layer of snow and freezing rain coats the steps of the Philadelphia Museum of Art, Tuesday, March 14, 2017.

What — what is this? Is this the snow we've all been hearing was out to threaten our lives? Yes, it's nasty out there. It's blustery and cold, it's wet, there's definitely snow, but Stella's not looking as ferocious as many forecasters had projected in Philadelphia.

That's because the dividing line between snow and wintry mix moved further inward than meteorologists anticipated, making it hard to say what, exactly, has been falling from the sky.

Thankfully, Philly is home to a world-famous comedian who happens to be in the area to shoot a movie. He summed up the weather pretty well on Tuesday.

Man it's all types of shit falling from the sky. It's Hail, sleet, snow, fingernails, baby feet, peppermints....This shit is ridiculous

I can't go no where....I swear I was going to shovel a couple of people's pavements today but the roads are to bad for us to drive!

Here's a sampling of what the rest of Philly had to say about Stella, including an opportune promo for the upcoming HoagieNation festival led by Hall & Oates.

All this snow in Philly has us dreaming of a summer concert! ☀️ #HoagieNation PRESALE starts 3/16 @ noon https://t.co/3Xp1QCYKVT Code: MAGIC pic.twitter.com/YfLZqlJ8Jg

philly forecasters this morning after predicting 12" of snow but it turns out it was just rain pic.twitter.com/G38HbOzIYP

KING EURO MODEL had 17 inches as of 5am for Philly area. Our consolation prize: 5 inches of sleet and snow 😈😬 pic.twitter.com/JuCkK4Ksui

Is it philly weathermen that suck. I'm looking at like 3 inches of snow. What's happened to 12-20"🤔

Everyone on my TL in Philly is complaining about lack of snow and I'm like pic.twitter.com/tN9XEXY4Wv

It's noon which means I can officially start drinking on my Snow day! #StellaBlizzard ❄️❄️❄️ 🍺🍺 pic.twitter.com/bViLPn4Ukn

St Trails Day? There is more than one way to have good time out on the trails in Northeast Philly. I prefer a 7 mile run through deep snow. pic.twitter.com/dVsEowlzAm

Why do they always exagerate how much snow were gunna get???? They literally called this a blizzard for the philly area

With sun peeking through clouds, I am suffering from snow (er, slush) glare now. 😎

Hey #Philly, how do you find Will Smith in the snow?
Look for Fresh Prints.

@weatherchannel I love the Weather Channel but all stations got this "blizzard" wrong here in Philly. I really wanted more snow!

Before we blame the meteorologists, let's point out that they had their own Twitter disagreements about the impact of the storm. It's an imperfect science.

The real downside to this wintry mix business is that it will now be a much bigger pain to remove. Viva la Shovelution.