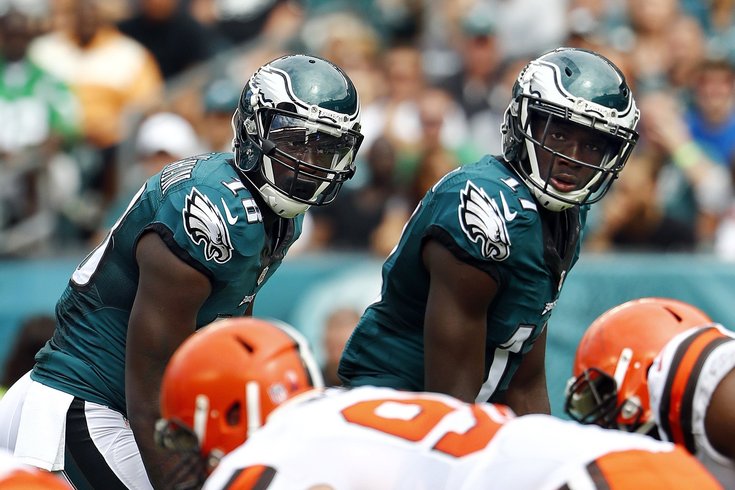 Last week against the Seattle Seahawks, the Philadelphia Eagles had a 57-yard touchdown wiped off the board because Nelson Agholor did not line up correctly at the snap. It was the second time in as many years that an illegal formation penalty by Agholor cost the Eagles a touchdown.

On Monday night against the Green Bay Packers, another gaffe by an Eagles wide receiver wiped out a huge play.

Early in the fourth quarter, the Eagles ran a screen to Darren Sproles that picked up 41 yards down to the Green Bay 34 yard line but was called back on an offensive pass interference call on Dorial Green-Beckham.

Blocking more than one yard beyond the line of scrimmage by an offensive player prior to a pass being thrown is offensive pass interference.

Unlike many other penalties in the NFL, that's pretty straightforward.

While the call may have seemed a little "ticky-tack" at the time, it has been a play of emphasis for officials this season. Here's another look at the play below. Green-Beckham enters the picture at the bottom right corner of the screen late:

As you can see, Green-Beckham comes off the snap and immediately engages with the defensive back more than a yard past the line of scrimmage, before the ball is thrown. That's a penalty, and a really easy call, even if inconsequential to the outcome of the play.

For example, while this isn't exactly the same type of screen, it's the same concept of blocking. Watch how the Packers' wide receivers sort of get in the way of the Eagles' defensive backs without contacting them, and then once the ball is complete, they engage.

That's how to properly execute that type of block from the wide receiver position. But that's not the worst part.

What's worse is that Green-Beckham WAS FLAGGED FOR THE EXACT SAME THING last week against Seattle:

When asked after the game what the rule on that play is, Green-Beckham didn't seem to know.

"When the ball is thrown, I believe you can block," he said. "You never know. The rules change every day, but we know that we have to be critical of ourselves and study film."

After Green-Beckham committed offensive pass interference against Seattle on a nearly identical play, the Eagles' coaching staff either didn't educate him on the rule, or Green-Beckham didn't listen. These aren't "mistakes." They're repeated mistakes on very basic football concepts and rules.