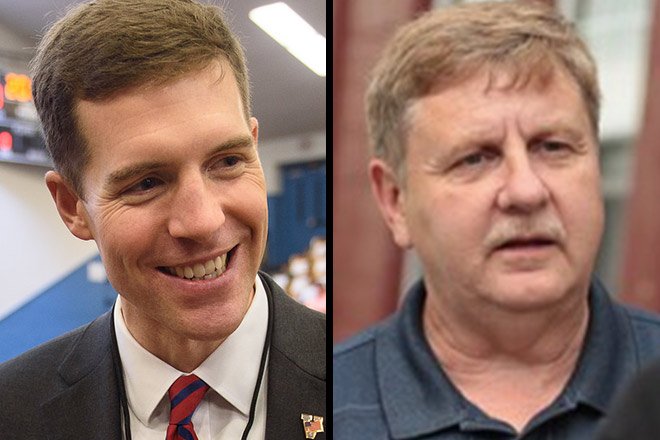 Democrat Conor Lamb, left, and Republican Rick Saccone were locked in a tight race in the special election for the 18th Congressional District in western Pennsylvania.

The special election in the 18th Congressional District of western Pennsylvania – considered a bellwether for the midterm elections in November – is still too close to call.

With 100 percent of the vote in, Democrat Conor Lamb, 33, holds a slight lead – less than 700 votes – over Republican state Rep. Rick Saccone, 60, with some absentee and provisional ballots still being counted, according to CNN.

Lamb, a Marine veteran, told his Election Day crowd that voters had directed him to “do your job” in Washington, the Associated Press reported. “Mission accepted,” he declared.

Earlier, Saccone told his own supporters, “It’s not over yet, we’re going to fight all the way, all the way to the end, we’ll never give up,” according to the wire service.

In 2016, Trump carried the district by 20 points, but Saccone couldn't keep up with Lamb in the most populous part of the district – in southern Allegheny County. Saccone outpolled Lamb in Washington, Westmoreland and Greene counties.

The election looks headed to a recount even though one is not automatic on the congressional district level in Pennsylvania, according to state law. But candidates can seek a recount within five days of counties completing their vote counts.

“If they win, a lot of people will look at this — see that the Democrats won in a Trump seat — and they’ll say, ‘The Democrats will retake the House, so let’s send them more money,’” said Davis, the former Virginia congressman who led the NRCC in the 2000 and 2002 election cycles. “It’ll be overhyped and over-analyzed, but it will generate momentum and money for Democrats.”

Charles E. Cook Jr. of the Cook Political Report wrote before the election that the Democrats never should have had a serious shot at winning the seat:

There is little doubt that Saccone is an underwhelming candidate while Lamb is much stronger than Democrats are usually able to field in a district like this. But the fact that Donald Trump won it by 19.6 percentage points in 2016, and Mitt Romney beat President Obama by 17 points in 2012, means that even with a lousy candidate, Republicans should win this one. If Democrats pick this seat up, a lot of Republican House members sitting in districts that they have thought of as fairly safe may not be so safe after all.

Some Republican strategists are privately worrying that there are quite a few GOP House members who don’t really understand how much danger they are in. Of the 238 Republican members of the House, 174 were elected after 2006, meaning they were not in the House for President George W. Bush’s second-term midterm election—the last time that Republicans faced a substantial headwind. Bush’s 38 percent Gallup job-approval ratings going into that midterm election were roughly what Trump’s are now (39 percent), and the GOP lost both their House and Senate majorities that year.

The victor will have to start campaigning for re-election almost immediately in a different district, after the state Supreme Court redrew Pennsylvania’s congressional boundaries, the AP reported.