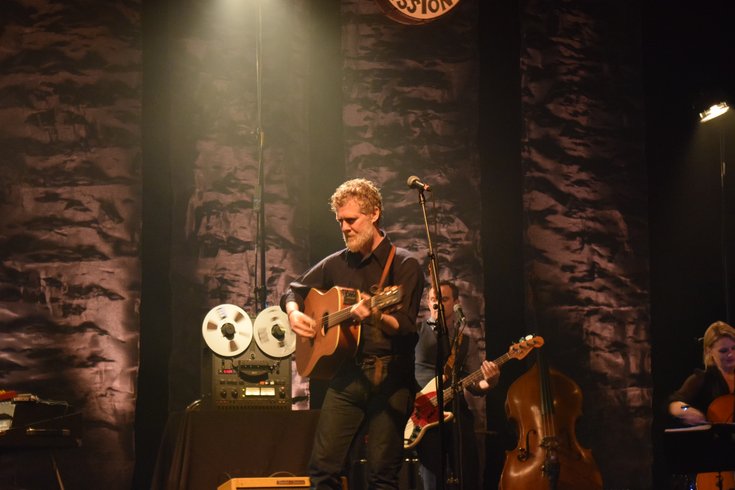 Glen Hansard entertained the crowd with an evening of songs and stories.

“The closest we’ve ever come to getting shot was here.” Glen Hansard told a lot of stories last night but this was his anecdote about Philadelphia. While reminiscing about all the venues he's played during his career with The Frames and as a solo artist, he mentioned the night they were loading their equipment into a van when a man approached with a gun. He admits they get a lot of mileage out of the story. “Remember Philadelphia?” He added shaking his head, imitating a hard-won recollection. “Oh, yeah.”

It’s difficult to say what was more charming, his stories that began most songs or theatricality to his stage show. On a set that evoked the intimacy of a bunch of musicians in a studio, Hansard had the audience rapt with the tales that inspired his recent album “Didn’t He Ramble“ and the follow-up EP “A Season On The Line.“ Most were about his deceased father who inspired many of the songs on “Didn’t He Ramble.”

Hansard played “Paying My Way.” It's about working hard to support a family, then taking solace in the pub afterward. Then the rollicking “Lowly Deserter,” a song about the down-on-their-luck fellows Hansard’s father brought home for temporary shelter (or “the druncles,” as the Hansard family called them). Other songs and stories were about a friend who deserved a kick in the pants, “My Little Ruin,” and a friend who deserved a heartfelt apology, “McCormack’s Wall.” He also played songs from “Once,” but there were no anecdotes about those; he lets his Oscar and Tony awards speak to that.

After a stunning set that included an interlude into “Pure Imagination” with virtuosic accompaniment from his mini string section, Hansard played a strip down encore on acoustic guitar. Afterward, he invited a young fan to join him onstage to sing along to “Gold” and a busker named Ryan that he saw performing outside the venue earlier.

They ended the night unplugged. Opening performer Joe Purdy joined Hansard, the young fan, and the band members for an acoustic version of Leonard Cohen’s “Passing Through.” And everyone got to go home with a story of their own.