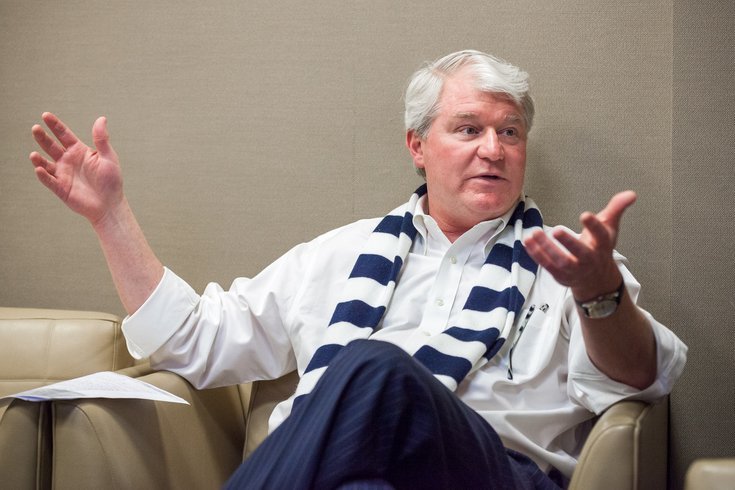 A nonunion contractor has filed a federal lawsuit against IBEW Local 98 President John Dougherty and his fellow union workers, alleging racketeering by way of intimidation and harassment at a job site.

The suit filed Monday claims Dougherty used a racial slur during a confrontation that resulted in a physical fight that's already been well-documented in the media.

Joshua Keesee, an electrical contractor, was hired to do work at a property at 3rd and Reed streets in South Philadelphia in August 2015 after another nonunion contractor quit the job because of harassment by Dougherty, the complaint alleges.

That's when IBEW came after him, Keesee alleges. His lawsuit claims that Local 98 member Christopher Owen began approaching him at the job site on a regular basis, pressuring Keesee to join IBEW, which Owen allegedly said would net Keesee "easy money."

At one point, Owen bragged that he made an annual salary of $140,000 for keeping watch over an inflatable rat that IBEW often sets up at sites using nonunion workers, according to the complaint.

In December 2015, Keesee alleges he found Owen rummaging through his work van. When confronted, Owen said he didn't know it was Keesee's vehicle, the suit claims.

Then, on Jan. 21, Dougherty, along with Owen and fellow union members Niko Rodriguez and Thomas Rodriguez, drove to the job site at 3rd and Reed streets.

What happened that day has already been reported, but with conflicting accounts from the parties — including new allegations in Keesee's lawsuit.

According to Keesee, Dougherty was pointing out a sticker on the back of Keesee's van — a Local 98 sticker, Dougherty has said.

Keesee agreed to removal of the sticker, which he claims in the suit had been placed by the company that sold him the van.

When Thomas Rodriguez began scraping the sticker off with a knife, Keesee laughed, which angered Dougherty, according to the complaint.

The lawsuit alleges that Dougherty told Keesee, who is a Native American, that nonunion workers weren't welcome in South Philadelphia and that "we don't want n*****s here."

Keesee thought he was being baited and laughed off Dougherty's slur, calling the group cowards, the suit claims. That's when Dougherty allegedly said "do what you want with him."

The lawsuit alleges a fight broke out after Thomas Rodriguez came at Keesee with a knife, and Dougherty landed two punches to Keesee, breaking his nose. Keesee hit Thomas Rodriguez in defense, but was struck 10 more times before a coworker pulled him away, the suit contends.

Keesee walked backwards while calling the group cowards, and Dougherty and the others followed him for a little while before returning to their vehicles. Keesee, still upset and badly injured, then approached the union members at their vehicles, telling Dougherty that a real man would fight him one-on-one, the suit alleges.

The suit claims that Dougherty began charging at Keesee — followed by the three others — and eventually cornered Keesee, hitting him several more times and leaving him with a broken nose, swollen lumps on his head and concussion-like symptoms.

In a statement Monday, Frank Keel, spokesperson for Dougherty, said that he could not provide comment on the suit because they hadn't seen it yet.

"All you need to know about the motive of the lawsuit is that the press received it before we did." Keel said.

Dougherty, however, is on record with a different version of events around the scuffle. In an interview with PhillyVoice in February, the union boss said that after Keesee gave him permission to remove the sticker, Thomas Rodriguez began doing so with a knife. Keesee then came up and struck Thomas Rodriguez and screamed at them, Dougherty said.

When Dougherty walked back to his vehicle after restraining Thomas Rodriguez, Keesee approached and made threats to his family, Dougherty said. When Keesee ran up to him, they squared up, Keesee threw the first punch, which Dougherty blocked before landing two punches and ending the fight, Dougherty claimed.

Keesee claims the day after the fight about 15 people affiliated with Local 98 were at the site giving him "menacing" looks.

Keesee alleges that he quit the job out of fear for his well-being and that, later in January, a Local 98 employee approached him and told him if he "forgot about" the alleged assault at the job site, the union could get him the money he lost from quitting the project. Keesee says he declined the offer.

The Inquirer reported in February that the FBI and state prosecutors were looking into the incident. But no charges have been filed.

Philadelphia District Attorney Seth Williams had referred the case to the attorney general's office because he accepted political contributions from Local 98. Former Attorney General Kathleen Kane, who has since resigned following a criminal conviction, had said other prosecutors would make a decision on the case because of a similar relationship she had with Dougherty and the union.

Dougherty's home in South Philadelphia and the Local 98 union hall in Spring Garden were raided by FBI agents in August. The reason for that probe is unknown.