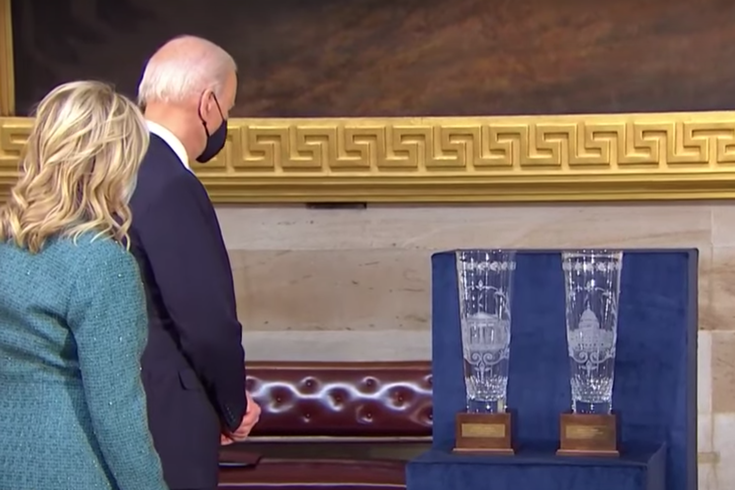 President Joe Biden receives a Lenox vase engraved with an image of the White House on Inauguration Day.

The vases were among the various gifts Biden and Harris received from congressional leaders in the U.S. Capitol after being sworn into office Wednesday.

Minnesota Sen. Amy Klobuchar, who chaired the Inaugural Committee, presented the vases to Biden and Harris.

"The gifts represent the hope and the faith the American people have placed in you to move our country forward," Klobuchar said.

Headquartered in Bristol, Lenox has designed custom-made gifts for every presidential inauguration since 1989, when George H.W. Bush was sworn into office. The company, which employs about 160 people, was founded in Trenton, New Jersey in 1889.

In 1918, Lenox became the first American china to be used in the White House, according to the company's website. Six former presidents have used Lenox china in the White House: Woodrow Wilson, Franklin Roosevelt, Harry Truman, Bill Clinton and George W. Bush.

"We are truly honored to craft the inaugural gifts for President Biden and Vice President Harris," the company said in a statement on its Facebook page.

Lenox has been battered by the economic impact of the COVID-19 pandemic. The company had to shut down its U.S. manufacturing plant in Kinston, North Carolina last April and close its retail outlets last July, according to the Inquirer. Two of their retail stores were located in Egg Harbor City and Bethlehem.

The downsizing led to Lenox being acquired by Centre Lane Partners, a New York-based private-equity firm, in October.

"Like many American companies, we have suffered immensely during COVID-19 and had to make some very difficult business decisions to continue to survive," Lenox CEO Mads Ryder told the Inquirer.