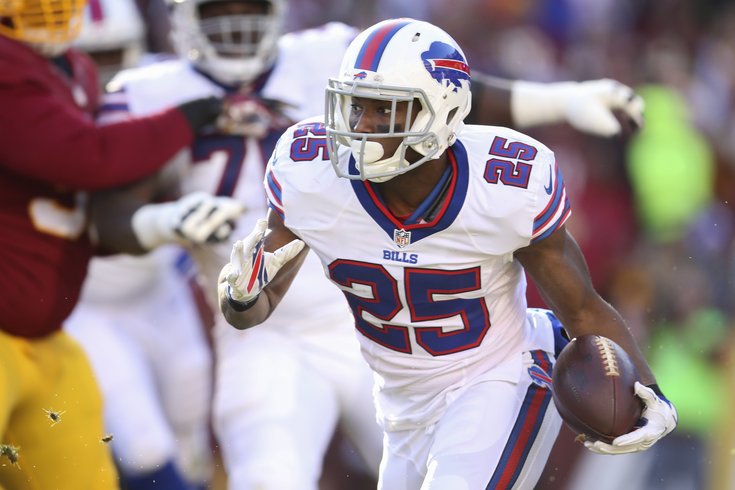 In audio released of the 911 call following the beating and robbery of the estranged girlfriend of former Philadelphia Eagles running back LeSean McCoy, the woman who was attacked is heard telling the emergency dispatcher the break-in may have had "something to do with" McCoy.

(EDITOR'S NOTE: This story contains a tweet with a graphic photo showing the injuries suffered by the woman in this attack)

The woman told the operator she had been hit in the face with a gun and robbed of jewelry while inside McCoy's home located outside of Atlanta, in Alpharetta, Georgia, where she had been staying.

"My face is demolished right now," the caller said.

Police redacted the woman's name in the audio of her 911 call with the emergency dispatcher but her attorneys previously identified Delicia Cordon as the victim of the home invasion.

The Alpharetta Police Department released more details on the incident on Thursday, including a description of the suspect, described as "a black man wearing a mask and dressed in all black," TMZ reported.

Allegations that McCoy, who spent six seasons playing for the Philadelphia Eagles and currently plays for the Buffalo Bills, was somehow involved in the invasion began to surface on social media Tuesday. A friend of Cordon's shared a photo of a woman with a bloodied and bruised face.

"I can't believe you did this to my best friend!!!!!" the woman identified as Mia on Instagram wrote in a post that has since been deleted. "YOUR KARMA IS GOING TO BE SO REAL!!! The world needs to know what type of animal you are!!!!"

McCoy responded to the allegations as "totally baseless" and "offensive." According to ESPN, McCoy is spending the summer in training with the Bills in Miami.

Apparently the two have had a rocky relationship since they broke up in July 2017. The Washington Post reported police were called to McCoy's home for a dispute that involved women's clothing "piled on a mound on the driveway." By the time police arrived, Cordon was gone. But McCoy told officers the pair had broken up because of accusations of McCoy cheating.

He also reported an issue of jewelry to the police. McCoy told officers the couple had often borrowed jewelry from high-end jewelers to wear at special events and that Cordon was refusing to return several of the pieces, even though he repeatedly asked her to do so, according to police reports obtained by the Post.

In June, police also responded to an incident when McCoy's mother, Daphne, staged a secret eviction with a moving van to retrieve McCoy's belongings, the Post reported. But the attempt was unsuccessful because police explained the pair would need to go to court to determine ownership of all shared belongings like furniture.

The NFL said in a statement on Tuesday it was reviewing the matter, and the Bills released a statement saying they were in contact with the NFL and McCoy to gather more information.