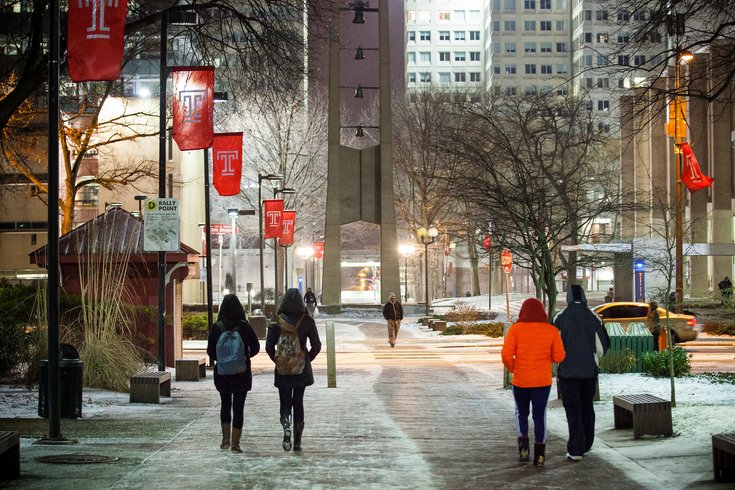 Students walk through the center of Temple University's campus in a light dusting of snow that fell early Monday night.

A second wave of snow, from a nor'easter off the coast, will intensify overnight and into Tuesday morning, bringing heavy snow to the Delaware Valley.

Meanwhile, a massive, wind-whipped blizzard slammed into the points north of the city, creating havoc for more than 60 million people and forcing New York City to shut down on a scale not seen since Superstorm Sandy devastated the region in 2012.

The potentially historic storm, which could affect 20 percent of the U.S. population, caused several states up and down the East Coast to declare emergencies, forced the cancellation of thousands of flights, closed major mass transit hubs and schools.

Officials warned that the storm could dump as much as 3 feet of snow along northern parts of the East Coast.

In the Philadelphia region, a winter storm warning is in effect through 6 p.m. Tuesday.

With the first, more tame storm of the two-headed monster moving away, the second phase, a nor'easter moving up the coast, is expected to produce snow amounts by Tuesday morning from 6-10 inches along the I-95 corridor, the National Weather Service said. Certain coastal locations have the potential for more snow (see map below).

Rutgers University has canceled classes until 1 p.m. Tuesday. Philadelphia Community College and Camden County College have announced that they will be closed Tuesday.

Transit shut down in the Garden State at 10 p.m. Monday, and riders can expect it will be shut down on Tuesday as well, Christie said in a noon news conference.

At 11 p.m. Monday, New Jersey implemented a statewide travel ban except for emergency, public safety and utility companies, and others assisting in storm recovery, according to 511NJ.com. 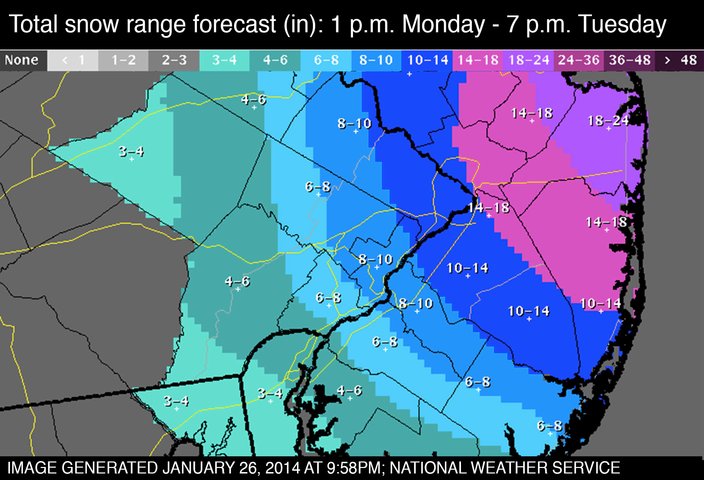 All Regional Rail trains will operate on a Saturday schedule beginning at the start of service Tuesday morning, and residents should check the agency's website for a full listing of affected routes.

Nutter urged residents to remove their vehicles from snow emergency routes, saying they will be ticketed and towed.

The mayor said the city expects all streets to be plowed and treated within 48-72 hours of the end of the snowfall. He noted that streets that are "passable" are deemed cleared, saying it is impossible for the city to pave each street to the blacktop.

Residents must clear a three-foot walkway in front of their homes within six hours of the snowfall's conclusion, the mayor said. He urged them not to shovel snow into the streets, saying violators will be fined. Violators can be reported by using #plowticket @PhilaStreets @PhillyPolice on Twitter. Disabled and senior city residents can call 3-1-1 for help with shoveling.

"What we always ask for is patience, calm and common sense," Nutter said. 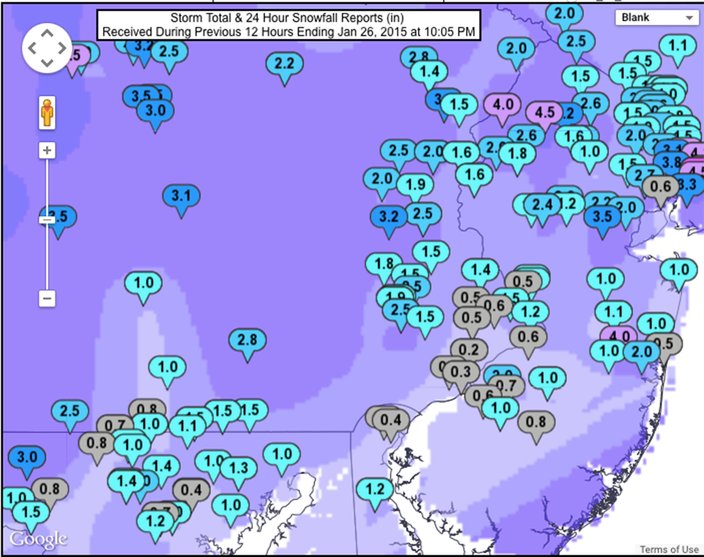 The Philadelphia Parking Authority (PPA) detailed on its website on Monday that it would offer a $5 parking rate at PPA-owned garages until 8 a.m. Wednesday.

Travel will be extremely dangerous, forecasters said, as strong, snow-filled winds reduce visibility to near zero.

"Stay home if you can," Christie advised. "We want to make Wednesday productive and the only way we can do that is if you let us do our jobs (and stay off the roads) on Tuesday."

More than 210 flights out of Philadelphia International Airport (PHL), about 37 percent of scheduled departures, were canceled today, according to the flight-tracking service FlightAware.

The cancellations affect flights of American Airlines, US Airways and all regional partners, Huguely said in an email. The company plans to resume operations "as soon as it is safe to do so," she said.

PHL advises anyone scheduled to fly to check the status of their flight. Those planning to meet inbound flights are advised to check the flight status before leaving for the airport. Flight information can be obtained directly from the airlines, by calling the Airport's toll-free flight information line, 1.800.PHL.GATE, or by checking the website.​

PennDOT says it has 2,250 trucks, 235 rental trucks and 200 trucks on standby across the state to respond to the weather. Going into the weekend, PennDOT had more than 600,000 tons of salt on hand. So far this winter, PennDOT has used 350,000 tons and is running slightly lower than the five-year average winter usage. PennDOT estimates it has enough salt reserves to handle roughly 18 to 20 storms.

PennDOT wants drivers to approach the upcoming weather with utmost caution. Per a press release:

In areas where forecasts are calling for significant snow and possible icy conditions, motorists should postpone travel whenever possible. Those who travel in adverse conditions should ensure that their vehicle has a full tank of gas and an emergency kit packed. The kit should include warm clothing, blankets, non-perishable food and water, and any needed items such as medications and baby and pet supplies.

The NWS forecast for the next couple of days:

Wednesday: Sunny, with a high near 31.

Wednesday night: Mostly clear, with a low around 15.

Thursday: Partly sunny, with a high near 35.