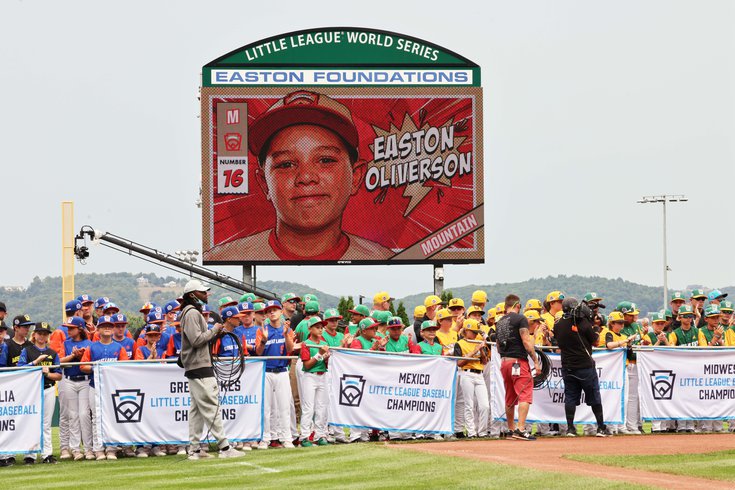 The family of Easton Oliverson, 12 -- a Little League World Series player from Utah who was injured after he fell out of a bunk bed in the league's dormitory in Williamsport, Lycoming County -- is suing for negligence in Philadelphia. The photo above shows a sign commemorating Oliverson at the tournament's opening game.

The family of the 12-year-old baseball player from Utah, who fractured his skull falling from a bunk bed in a dormitory in Williamsport, where his team had traveled to play in the Little League World Series, is suing the youth sports organization and the bed's manufacturer.

Easton Oliverson, a player on Snow Canyon Little League's team, was injured on Aug. 15. He suffered a fractured skull and an epidural hematoma, which is when blood accumulates between the brain and the skull. After more than a month in the hospital, Easton came home on Tuesday. He's still suffering from seizures and a swollen eye, which will require ongoing care, his family announced in an Instagram post.

The 10-page lawsuit filed in Common Pleas court on Friday by the boy's parents, Jace and Nancy Oliverson, alleges that Little League International and the bed's manufacturer Savoy Contract Furniture, also based in Williamsport, were negligent for failing to install a safety railing, USA Today reported.

The Oliverson family is seeking $50,000 for Easton's ongoing care and in addition to punitive damages.

Easton, who played outfield for the Snow Canyon team based in Santa Clara, Utah, underwent three surgeries and battled a staph infection during his hospital stay, the family's lawyer Ken Fulginiti told the Associated Press.

"He is resting and adjusting to his recovery away from the hospital," the family's Instagram post says. "Please continue to keep Easton in your prayers. He is thrilled to be home, but understands that he still has a very long road ahead."

After his fall, Easton was airlifted to the Geisinger Janet Weis Children's Hospital in Danville, Montour County, where he was placed in a medically induced coma. In late August, he was flown to a hospital in Salt Lake City, Utah, and he was discharged from that hospital on Tuesday.

Jace Oliverson was the assistant coach for the Snow Canyon team. His younger son Brogan, 10, played in his brother's spot following the injury, FOX13 reported. The team was eliminated after two losses.