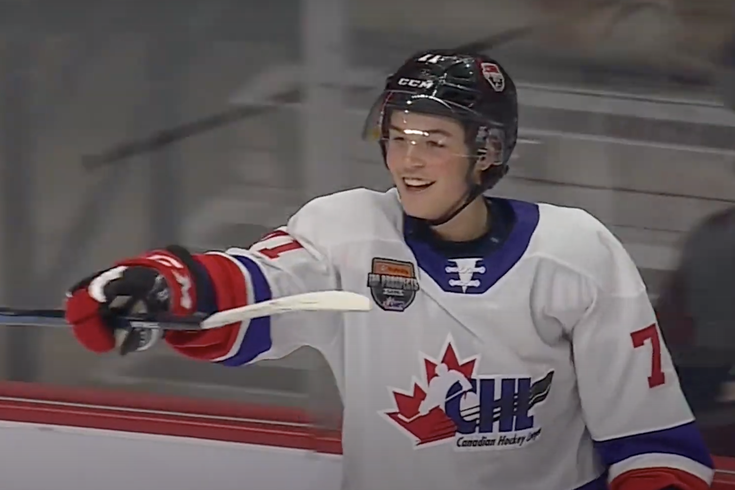 The Flyers are hoping to add more firepower to their 2020 draft class that already includes Tyson Foerster.

After getting some sleep (likely very little), the Flyers' front office will get back to work Wednesday morning as they look to find gems in the later rounds of the 2020 NHL Draft — which continues on NHL Network at 11:30 a.m.

They kicked off the 2020-21 offseason (after Matt Niskanen retired and they re-signed Justin Braun) by picking a big scoring winger in Tyson Foerster with the 23rd overall pick (you can see his highlight reel right here). Philly had six picks in the ensuing six rounds, but made a pair of late trades first to move up in the fourth, and then to trade two sevenths to get back into the fifth. Their picks:

Philadelphia has had much more luck with players taken in the top two or three rounds making an impact. Very few second day picks have done much at the NHL level for the Flyers of late, with the possible exceptions of Connor Bunnaman (4th round in 2016) and Oskar Lindblom (4th round in 2014). The last 10 years have seen very few diamonds in the rough for Flyers scouts.

They'll obviously be trying to buck that trend Wednesday. Flyers' GM Chuck Fletcher seems to have a strategy, and that is not to worry about fit or need and always take the best available player on their draft board.

"No, we absolutely in no circumstances will go for position," Fletcher told media members late Tuesday night. "Definitely take the best player like we did today. There will still be based on what our list looks right now, there’s at least 15 players right now I think we would be thrilled to select at whatever number we are, at 54. ... Basically we should have a really good chance at falling into one of those players. Regardless of the position, we’ll be very happy to call the name."

The Flyers do have some ammo by way of having six picks in their arsenal (not even acknowledging players who could be jettisoned for draft picks). Will they be aggressive and move up at some point during the remainder of the drafts?

"It sounds like you’ve been talking to our scouts," Fletcher said. "They’re always clamoring to move up. They all have a personal favorite on the board right now. I think they want me to move up about three or four times and get three or four second round picks. We’ll see. Looking at it, there’s some teams that pick ahead of us that haven’t picked yet. There’s some teams probably thinking the same way we are that there are some kids falling that you didn’t expect to fall this far. We’ll see. If we can move up, great. Personally, looking at it from a broader perspective, I think I mentioned earlier, there’s at least 15 players that I believe we would be very excited as a group to draft any one of them."

We'll be updating this space throughout the day to keep you posted on any trades and on the Flyers' draft choices. In the meantime, keep track of all the budding rumors and action across the NHL with our live stream and open thread below: