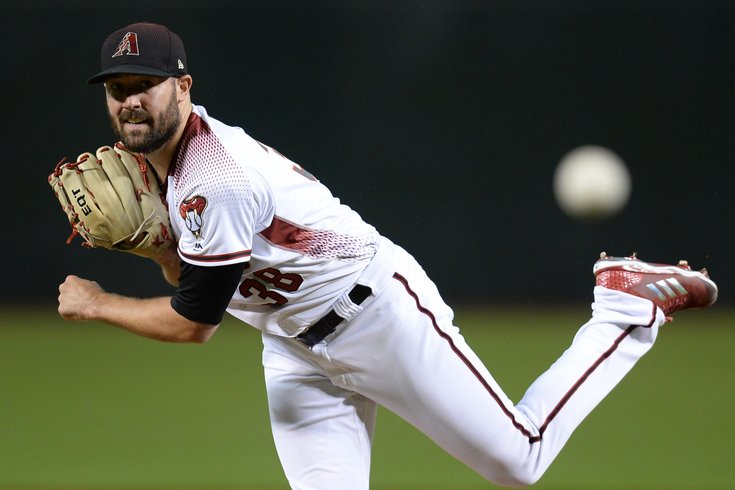 UPDATE: (1:55 p.m.) — The Phillies have improved their bullpen with the signing of David Robertson, a well-known back of the rotation arm with lots of postseason experience.

We wrote about it here.

With one of the bigger names off the free market and committed to Philadelphia now, it will be interesting to see if this helped the team gain momentum as it tries to convince Bryce Harper and/or Manny Machado to sign here.

UPDATE (1:00 p.m.) — The slow roll toward the eventual signing of Bryce Harper and Manny Machado, somewhere, is whimpering along, and the attention of the teams involved seems to be turning away from super stars and into the category of making marginal improvements.

The Phillies, actively in pursuit of pretty much every single big name out there, from Dallas Keuchel to Corey Kluber to Craig Kimbrel and everything in between, are reportedly looking at furthering the bullpen right now:

I'm not sure what it says about the Machado market. But sources in touch with the #Yankees & #Phillies say they're both focused heavily on the bullpen market this week.#Yankees in on Britton, Ottavino, Robertson. #Phillies also in that mix, but lots of Robertson talk there.

Adding a solid veteran like Robertson or Britton would strengthen the pen, but could get in the way of Seranthony Dominguez — who showed the ability to close at the big league level last season despite being in his early 20s.

If a move is secured for Philadelphia this week, it sounds like it could be in the pen.

Thus far, the Phillies have not been able to take advantage of the Diamondback's fire sale, as Patrick Corbin went to Washington and Paul Goldschmidt was part of a blockbuster trade to the Cardinals.

If you believe the Boston Globe's baseball insider Nick Cafardo, Philly is in on another big name in Arizona: lefty starter Robbie Ray.

Ray may be the next Diamondback to be traded. There is word that teams are calling about his availability. The Phillies and Astros are very interested. Ray, 27, went 6-2 in 24 starts last season. He earned $3.95 million and is arbitration eligible for the second time. [Boston Globe]

Philadelphia went all of last season without a left-handed starter, so that alone implies the Phillies should have an interest. He was an All-Star two seasons ago when he went 15-5 with a 2.89 ERA, and had an ERA of 3.93 last year in just 24 starts.

Though not quite an ace, he does have the upside of a top of the rotation starter and is still arbitration eligible — meaning he's under team control and at a reasonable salary until 2021.

Ray would require the Phils to package together a trade, as opposed to another big name free agent pitcher — Dallas Keuchel — who is a free agent. It will be interesting to see which approach they take as the Phils continue to miss out on free agent targets this offseason.

Follow along with out open thread/live chat throughout the day for updates on Ray, and on Bryce Harper, Manny Machado and all the other free agents tied to the Phillies as hot stove season continues: