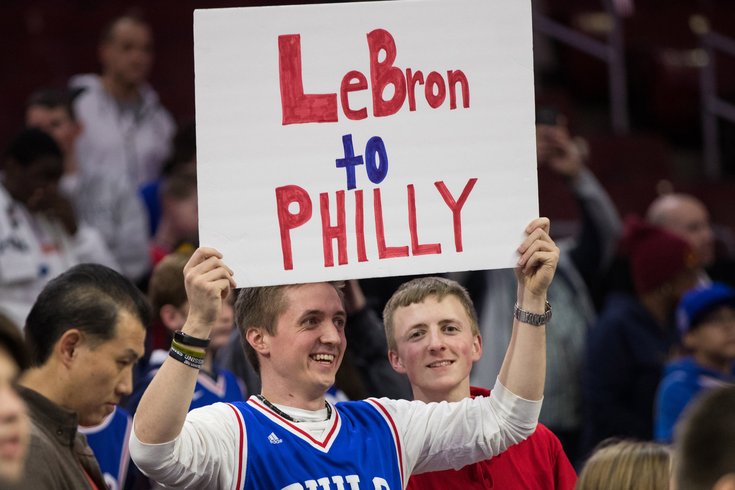 Sixers fans hold a sign for LeBron prior to a game at Wells Fargo Center.

Joel Sherman from the New York Post said what most Phillies fans sort of knew, but didn't want to see put into words:

So the Dodgers and Yankees could offer shorter deals for large annual values and force Harper/Machado to decide whether they want the long money or an all-but-guaranteed chance to win annually and another shot at free agency at, say, age 30 — younger, if outs are included. Word is neither player particularly likes Philadelphia and both would have preferred the Yankees, who have shown little interest in Harper. [New York Post]

There it is. Neither player particularly likes Philadelphia. They are more likely to take less money and less years from New York.

The Phillies have more or less raised the stakes of this offseason to be Manny Machado, Bryce Harper or bust. And it looks like they are staring bust right between the eyes.

Why is that? Why do star players — again and again — spurn the city of Philadelphia?

If Machado and Harper sign with the Yankees and Dodgers respectively, or with any other teams it will be them turning down what will almost assuredly be the most money offered.

It's not an isolated incident. Earlier this offseason, Patrick Corbin turned down big bucks to go to Washington. J.A. Happ wanted a third year and went to the Yankees.

It's other sports too. Last offseason LeBron James really didn't take playing in Philadelphia seriously, despite the Sixers offering James or other big name free agents the best chance to win a title in a few years with its young core.

Jon Tavares said he didn't want to play in Philly last summer when he was a free agent and didn't even consider the Flyers.

The mighty Eagles have worked around this fact, whether intentionally or not, signing a bevy of older veterans to short deals — like Chris Long, Michael Bennett, Torrey Smith last season and so on — and it worked to the tune of a Super Bowl 52 championship crown.

Is that this city's lot in life? Are GM's forced to build teams without the opportunity to lure in big name free agents?

It will certainly be harder to win championships without that tool in the tool bag.

Thursday night I went on the Cracked Bell Crew Podcast and came up with a few working theories as to why this problem has become a trend in recent years.

Los Angeles and New York just offer things Philadelphia can't. No one seems to be saying Philly is a bad place to live, as many former star athletes still call this region and its suburbs home, but it doesn't have the same appeal as L.A. — the entertainment capital of the world and New York — the business center of America.

Houston offers no state income tax. Miami offers the same, plus South Beach. Philly, well, it's just a landlocked blue-collar city without many frills. Where would you want to spend your hundreds of millions of dollars?

Larry Bowa, a former Phillies manager and player, spoke about this Friday Morning and said it pretty succinctly. The Philly fans are a lot to handle sometimes:

Reports are that neither Machado or Harper wants to play in Philadelphia. Longtime #Phillies player, coach, manager and advisor Larry Bowa makes his pitch for Philadelphia. pic.twitter.com/xl3k1N3Blo

Fans here recruit. They've literally paid for LeBron James and Bryce Harper billboards all by themselves. You can't blame the fans for lack of enthusiasm or trying.

It's been said more than once: If Machado signs here and then doesn't run out a ground ball, he's going to absolutely get decimated.

It will be everywhere and it will be ugly.

Maybe we are overthinking it. Maybe it's just the ineptitude of the negotiators who are unable to bring in stars.

Ron Hextall is out with the Flyers. Matt Klentak has been timid with the Phillies, and is still very young and unproven. The Sixers had a historic tank job prior to bringing in Bryan Colangelo — and we know how that all went. And now the fate of The Process and its legacy are in the hands of a 39-year-old former player in Elton Brand.

Say what you want about New York and L.A., but they haver a proven track record of bringing in big names and competing for titles.

Could this all be a ploy to get more money? Think about it. If I was Harper or Machado and wanted to maximize the dollar amount of my next contract, saying you prefer other cities would probably get Philadelphia to up its offer. With someone like Scott Boras responsible for getting Harper paid, it's not unreasonable to think that everything is intentional. It could be a pump fake. He could just be trying to get that historic $400 million deal.

It's becoming impossible to avoid the cycle. News breaks that a Philadelphia team is interested in this or that player (lately it's been almost every player). Anticipation grows and Vegas handicaps Philly as a landing spot. And then the player goes somewhere else.

The cycle will eventually end, but one can't help but wonder why it's been so bad here for so long on the open market.

You can listen to the rest of the podcast above — the discussion about free agents begins around the 42 minute mark.