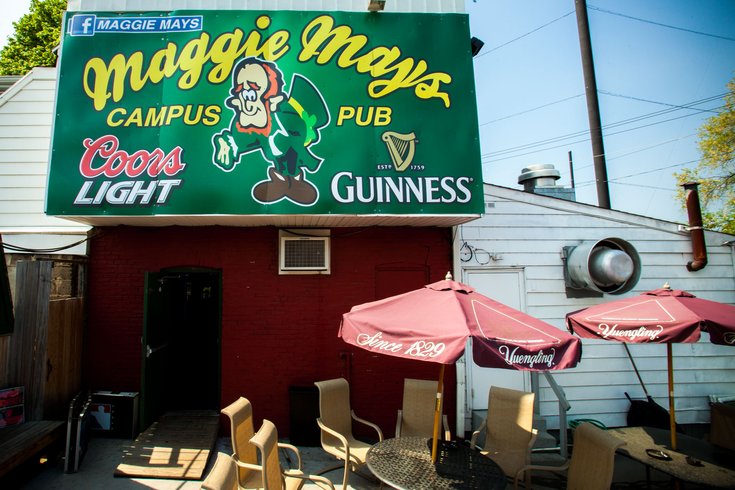 Tens of thousands of commuters drive through the city of Chester, every day, seeing dilapidated rowhouses peering over I-95 as it splits the city in two.

The rundown homes are the only part of the city visible to motorists, except for the huge billboard for Maggie May’s Campus Pub, the last Irish bar in a city that used to be full of them.

The signage sports the time-honored, green-hued paraphernalia of Irish-American bars, notable in this instance chiefly because it is so profoundly different from the city that surrounds it. The bar managing to succeed in a city where the poverty rate is over 33 percent and the downtown shopping district has been almost entirely abandoned. Residents who can manage to gather the necessary resources quickly move out of its limits.

In a city that once hosted dozens of taverns, those left standing can now be counted on just two hands.

Since Chester became a real city in the late 1800s, it has had a gritty reputation. After the Civil War, the city experienced a huge influx of Irish and Polish immigrants – later joined by Russians, Italians, Ukrainians, and African-Americans – who labored first in the textile industry and the waterfront, and later in the heavy industry that blossomed in the early 20th century.

Always a working-class city – the owners and high-level managers mostly lived elsewhere – some neighborhoods even took the names of the companies. Maggie May’s is located in Sun Hill, a neighborhood built to house the massive swell of immigrant laborers who moved to the city during World War I. Chester was home to two of the Pew family’s massive industrial holdings, Sun Oil and Sun Shipbuilding – the latter a business that flourished during wartime. Between the 1910 and 1920 censuses, the population grew by 20,000. By 1950, the city had swelled to more than 66,000 residents.

But those days are long gone. Today, Chester has lost almost half its population, to 33,972 in the 2010 census. But if Sun Hill is hemmed in by I-95 to the south, it is bordered to the west by one of the only institutions still remaining in the city: Widener University. That proximity is the pub's lifeblood. 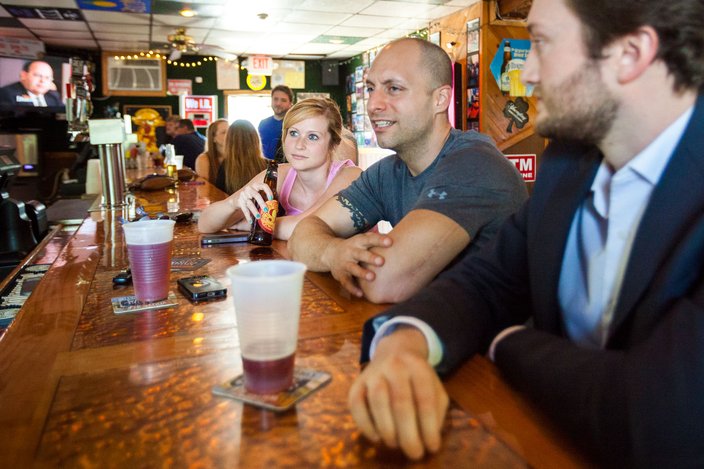 Alison, center, is a 2015 physical therapy graduate of Widener University and has lived in the same neighborhood as Maggie May's for the past three years. (Thom Carroll / PhillyVoice)

Maggie May’s thrives off of the college trade, catering to those who live a few short blocks away on campus, or in the warren of winding streets that lead up to the secluded bar. (It lies at the foot of a residential block, ringed on one side by houses, the open expanse of the oft-empty Widener stadium, and separated from the highway by a stout fence and a railroad line.)

“We just wanted to have somewhere for the kids to go because there was no other place to go that was at all walkable,” says Jeff Blair, working partner in Maggie May’s. The vast majority of the business comes from Widener, although he gets business from the hotels by the airport who bus people in, roving softball teams, and union guys. (The bartender counts off: steamfitters, electricians, carpenters.)

“For the Widener students they have to get into a bus, get into a car, and drive to a club," Blair said. "College kids like to get a little rowdy, so instead of getting rowdy and driving, they can walk. That was our point to push.”

On a weekday afternoon, during finals, the crowd certainly bears that marketing strategy out. The bar's clientele is almost entirely composed of Widener students. The ceiling is tiled with handpainted insignias of Widener fraternities, sororities, associations, and social cliques – whoever pays to get their square of plaster. On a purple backdrop, an industrious group of nurses have drawn the squigly line of a cardio monitor spiking into a frosty mug. The back wall is crowded with photos of regulars, including a blurry shot of a crowded room lifting shot glasses in appreciation of the day the bar first became licensed to serve liquor. 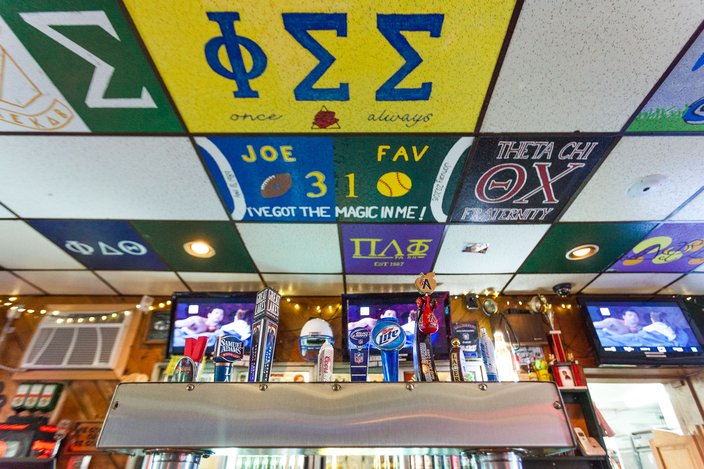 The building that holds Maggie May’s has been a saloon, in part, since the neighborhood was erected. In the early years it served candy on one side and beer on the other, despite the Eighteenth Amendment. (Prohibition was widely ignored in Chester, which reputedly held 1,000 speakeasies during those years.) The candy shop is many years gone, but later iterations stuck to the beer. Only after Blair and his partner – a 1990 Widener graduate – assumed control in 2010 did it become a full-service bar.

“It used to be more of an ordinary neighborhood bar,” says Cornelius Hill, a regular who works for Widener’s security force and has lived in an apartment above Maggie May’s for 15 years. “This place has been a model bar [since Blair and his partner took over], they’ve got it under control. [When I’m on duty] I don’t have to come down here and deal with anything. This bar is a safe place to go.”

On this particular afternoon a few graduate students, one of whom lives in Sun Hill, grouse about finals and crime. The word is that the college’s bookmobile was recently robbed at gunpoint. Everyone at the bar shakes their heads, and then orders another round. The city is terribly violent and long segregated from its surrounding suburbs. As a sort of appendage to Chester’s most prominent anchor institution, Maggie May’s stands apart from the harsher reality that governs the rest of the city, its billboard the only sign of commercial life from I-95.