Mailbag: Should the Eagles trade for Dolphins CB/S Minkah Fitzpatrick? 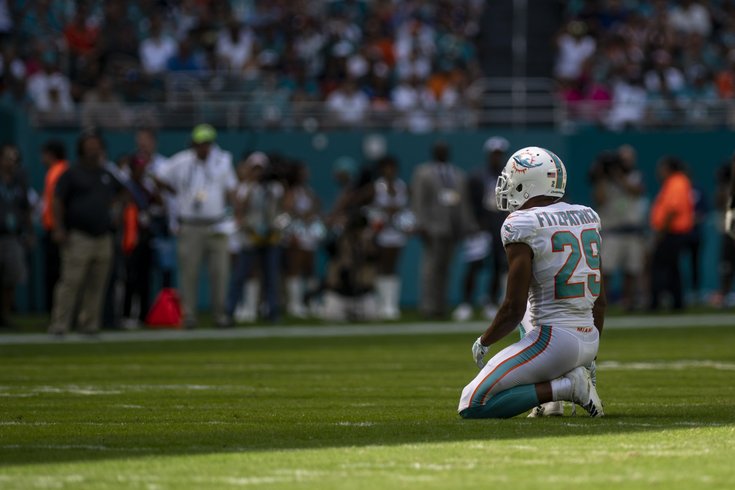 Minkah Fitzpatrick is unhappy with his role in Miami.

Question from Michael: Jimmy, should the Eagles trade for Minkah Fitzpatrick? I'll hang up and listen.

I do think he fits the Eagles' scheme perfectly, however, there are red flags.

First, the fit. His scouting report coming out of college, via Lance Zierlein:

Fitzpatrick turns up the intensity level as high as it will go and and rips off the knob until the game is over. Fitzpatrick has experience as a slot cornerback, but will likely be targeted as a "do-everything" safety who can be deployed as a sub-package linebacker, a blitzer or in the slot against big receivers and move tight ends. Fitzpatrick has consistently shined since his freshman season on Alabama defenses that have been loaded with NFL talent. His versatility, football character and desire to succeed should make him an early starter.

Does that sound a little bit like Malcolm Jenkins to you? Here's a highlight reel from his rookie season:

Unfortunately, Fitzpatrick seemingly has little interest in being used like Jenkins. According to a report from Chris Mortensen of ESPN, Fitzpatrick is unhappy playing multiple positions in Miami's defense.

Fitzpatrick, who was projected as a cornerback/safety out of Alabama, played three or four different positions against Baltimore. He has been uncomfortable with his constantly fluctuating role on the Dolphins' defense throughout the offseason.

During Miami's joint practices with the Tampa Bay Buccaneers in August, Fitzpatrick's mother, Melissa, mentioned on Twitter that he was being incorrectly used at strong safety to suit other players' skill sets.

Fitzpatrick confirmed that he agreed with his mother's thoughts after that practice, saying, "She feels very strongly. She's not wrong. Coach has asked me to do something right now. I got to do what they ask me to do. If we have to have some discussions in the future, we'll have those discussions.

And then there's the asking price. Per Mortensen's report, the Dolphins are seeking a first-round pick for Fitzpatrick, who was the 11th overall pick in the 2018 NFL Draft. With Fitzpatrick coming off a poor performance Week 1, and the red flags in his quotes above, I'm the Eagles, I'm passing on that price.

The marriage of team and player really only works if the Eagles feel like Fitzpatrick would embrace a Jenkins-like role. He would be a great fit as a third safety in the Eagles' defense this season (bye Andrew Sendejo, hello comp pick), and as a long-term starter, replacing either free agent to be Rodney McLeod or aging (and possibly still-unhappy-with-his-contract) Jenkins.

If Fitzpatrick is adamant that he wants to focus on one position, that would probably be slot corner in the Eagles' scheme, which they already have in Avonte Maddox. Otherwise, he's either playing the Jenkins role (which he doesn't want) or the McLeod role (which isn't worth parting with significant draft pick resources to fill).

It should be noted that the Eagles will have plenty of intelligence on Fitzpatrick, as his defensive coordinator a year ago was Matt Burke, who is now a defensive special assistant under Jim Schwartz. If the Eagles are comfortable that Fitzpatrick will play whatever role the Eagles ask of him, and the Dolphins are willing to relent on their unrealistic asking price of a 1, to, ohhhhh, something like a 2 and a developmental offensive tackle, then I think it's a trade that would make sense for both teams.

If Fitzpatrick insists on playing a specific role that suits his wants over the team's needs, however, he's wrecking the value of his own skill set.

Question from Kephas: It seemed like the Eagles' OL held up pretty well against what is supposed to be a pretty stout D Line for Washington. Where do you think Washington's D-Line ranks when compared with upcoming Eagles' opponents?

One of the under-discussed positives from Week 1 was the stellar play of the Eagles' offensive line, especially considering they got out to a slow start a season ago. Ryan Kerrigan is a very good edge rusher, and the three guys on their interior are all good players. And then there's Montez Sweat, an extremely athletic rookie, who played on the edge opposite Kerrigan.

This time last week, I had the following two matchups at No. 1 and No. 2 in my 5 matchups to watch:

They more than passed their first test.

Looking ahead to the rest of this month, the fronts the Eagles will face are as follows:

Question from Sabtle Genius: I'm impressed with J. Howard. In limited snaps he was very efficient. Good vision to find the hole, decisive, always going forward, caught the ball better than expected. After the game, he said the right things re: touches, and doesn't appear to be a complainer. Given that he is 24 years old, might he be a candidate for an extension?

First, I'll agree with everything you said about Howard. His Week 1 performance was encouraging.

Would the Eagles like to sign him to an extension if he continues to look the way he did Week 1? Yes, I imagine they would. However, if you're Jordan Howard, you're the third-leading rusher in the NFL since you entered the league, and you're playing well in the current year, are you taking some team-friendly discount?

While you and I may be able to look at the running back market and understand that Howard may not find super-lucrative offers in free agency, a player in Howard's situation will almost certainly hope otherwise.

Question from Desert_Eagle: What are the chances Daeshon Hall gets some playing time in Week 2?

With the Falcons being more of a threat through the air than on the ground, I think Hall is up this week instead of Josh Sweat.

Question from HeadClapperInCharge: Jimmy, With Kellen Moore looking like he will be calling a competent and modern offense, should Eagles fans be a more worried about the Cowboys then we thought coming into this season?

So, I remember when I published my Cowboys dumpster fire piece back in June, the one point that a lot of readers wanted to add in was that Kellen Moore, who was still only 29 at the time, was going to be their OC.

I did not see that as a negative for them, and purposely omitted it. Why? Well, their offense under Scott Linehan and Jason Garrett was extremely boring and predictable, and I figured there was nowhere to go but up. But certainly, with the caveat that it has only been one week, Moore looks like a much more creative offensive engineer.

Question from Rich: Lord Jimmy, much love as always. Forget where I saw it, but someone online proposed eliminating the Thursday night game and having two Monday night games every week, a la Week 1. Can't imagine the league would want that. However, the quality of Thursday night games seems pretty bad, (although not always), and I assume a lot of that has to do with the limited coaching and short-week recovery time. What say you?

The Panthers-Bucs game was so bad last night, that Merrill took to Twitter, ha:

Nobody loves NFL football more than I but the Tampa Bay at Carolina game (won by the Bucs) was absolutely atrocious. Both offenses were horrendous and the last few minutes lasted forever because of replay reviews. Pass interference challenges will be a mess.

And he's not wrong. Those games are usually pretty bad. That said, I kinda like them. I mean, on a Thursday night, it's either an NFL game, or getting frustrated by the Phillies. I'll take the NFL game, please, even if the quality isn't great. It's almost kinda fun watching crappy professional football sometimes.

And then also, just from a selfish perspective, I don't often get to just watch games all day on a Sunday from my living room. Whenever the Eagles have Thursday night games, I can do that!

As for the second Monday night game, personally, my old ass has no interest in watching a game from start to finish that begins after 10 p.m.

Question from LOADED: Do they serve alcohol in the press box? If so, have any of your fellow beats ever drank too much on game day and acted a fool?

They have beer post-game in Dallas. That's the only time I've ever seen that. They also have people who drive you back to your hotel, which is amazing, really. I'll bang back a few while I'm writing my post-game stuff there, but nobody is getting drunk. The best bet for seeing drunk beat writers is at the Senior Bowl in Mobile, the NFL Combine in Indy, or the NFL Annual Meetings (the location on that changes every year).