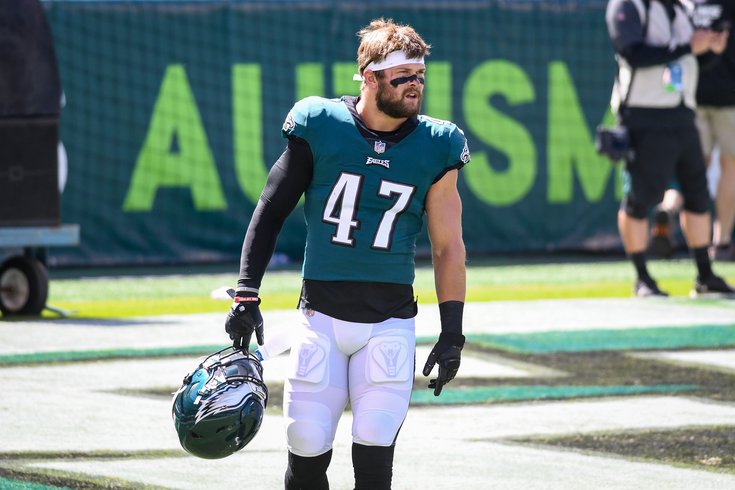 Question from John B: Every team will scheme to beat Nate Gerry like the Steelers did Sunday. Why is he on the field? Are the young linebackers unable to pick up the defense? They’re better athletes, but not on the field?

"They are all making progress. They are physically talented. When we can work them in, we'll work them in when it makes sense to the 11 guys on defense. We're in the business of trying to do whatever we can to win games, and doing what we think is best to win games. When it's time for those guys that we think it’s best for us to win games with them on the field, we'll do it."

In other words, he thinks Nate Gerry is better than Shaun Bradley and Davion Taylor right now. Schwartz did note during training camp that it’s harder for linebackers and safeties to learn the defense than the other positions.

The selection of Jalen Hurts in the second round has drawn the most criticism from the Eagles' 2020 draft, and rightfully so, but the selection of Davion Taylor in the third round isn’t far behind, in my opinion. It’s the most valuable resource the team has used on a young linebacker in the “new Howie” era, and it was on a project player at a position they don’t value who can't get on the field over arguably the worst three-down linebacker in the NFL.

Question from Brit: Hi Jimmy, we are already at the point where fans and writers are suggesting we start selling and losing games. This is such an American phenomenon in sports - cheering your team on to actively be worse. Trust the process. Tank for Tua. It’s not something that Europeans can relate to. We also want to win and be better than the other team. Even with the draft structure as it is, surely you must feel conflicted when you suggest the Eagles to do something to solidify a better draft position?

There’s a big difference between “tanking,” which is actively trying to lose games, and making decisions geared more toward the long-term when positive short-term results are extremely unlikely. Trading Zach Ertz at the trade deadline, for example, isn’t tanking. You’re merely maximizing the possible return on a player who may not be in the long-term plans of the team. Would you rather get a decent return on a player during a lost season, or a lesser return later?

You can make moves that might sting a bit in the short-term, but I don’t think anyone is suggesting that they purposely lose games for a higher draft pick. I certainly haven’t. By all means, go out and win this crappy division in addition to making moves that make sense, long-term.

Question from Mondor: Best bet (not necessarily best option) on starting outside receivers next year: Reagor/Hightower, Reagor/Fulgham, or Reagor/other?

If Fulgham is actually a good player, that would be huge from a roster-building standpoint. He’d be the X, and Reagor would be the Z. I still believe that they should find a more explosive slot receiver, but Fulgham’s unexpected rise would negate a glaring offseason need.

Question from Hud: (Instead of cutting Casey Toohill), why not just cut a vet that doesn't need to clear waivers and bring them back, or is it past the time for that?

They did that earlier in the year with Cre’Von LeBlanc, but the easier option here is to just not activate Vinny Curry yet. What’s the rush? At DE, you’re getting contributions from Brandon Graham, Derek Barnett, Josh Sweat, and Genard Avery. And even on the interior, you have a healthy Fletcher Cox, Malik Jackson, Javon Hargrave, and Hassan Ridgeway. It’s one of the rare spots on the roster where they’re actually healthy.

Who knows what new injuries there might be after this Ravens game, and who might have to go on IR, thus clearing up an additional roster spot? Why not wait and see before you waive a super-athletic DE with some promise, and lose him to a division rival? It’s senseless.

Question from Jarrad: It was frustrating to hear the story of Jeff Stoutland scrambling to do a Skype call with Dillard last minute to evaluate him further as they did not anticipate him being available when they selected. Poor preparation to not do that work in advance, and then compounding it by making a pick on a guy you hadn’t properly vetted. Poor process by the Eagles all around.

Question from Inquiring mind: Jimmy, why do you always write Patri*ts? I’m trying to crack the code.

Because they’ve been caught cheating repeatedly, and their accomplishments, in my view, should always be viewed with that in mind, hence the asterisk.

Question from RKotite: Jimmy, Travis Fulgham had 5 times the number of catches and 2.7 times then number of yards last week versus the week before. That trends to a 50 catch - 400 yards receiving game this week.

Your math checks out.