Maps make you wonder, what is Fishtown? 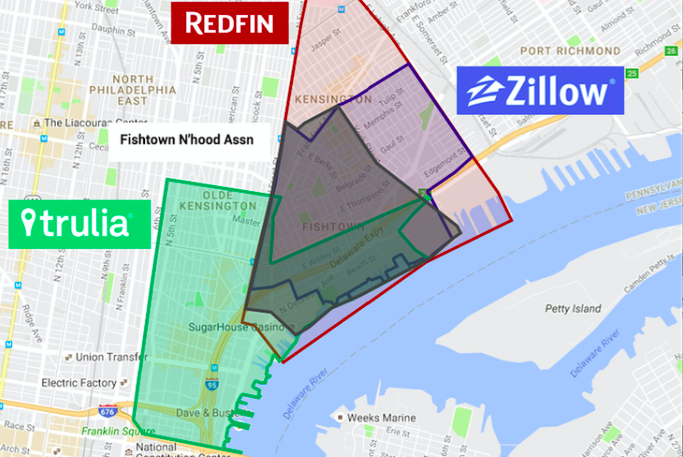 A map comparing Fishtown's boundaries as defined by the Fishtown Neighbors Association and real estate sites Zillow, Trulia and RedFin.

Fishtown has apparently grown up in more ways than one. It's grown down, too. And a little east and west.

These are the findings of a piercing analysis that breaks down just how far afield real estate websites will go to get a piece of the currency Fishtown has developed among city dwellers, homeowners and young people who appreciate a place with authentic cultural life.

Here's a map of those boundaries, which cover 0.79 square miles.

This Fishtown is a dwarf compared to the ones defined by Zillow, Trulia and RedFin, which were all found by soon-to-launch NeighborhoodX to be scooching those boundaries in a flagrant manner. 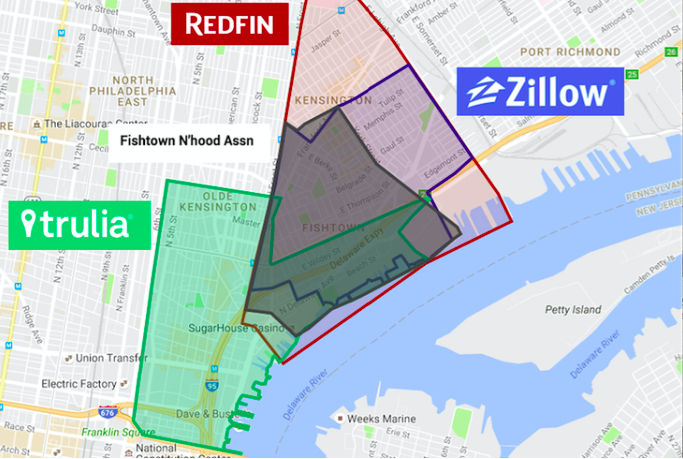 A map comparing Fishtown's boundaries as defined by the Fishtown Neighbors Association and real estate sites Zillow, Trulia and RedFin.

The areas of the spaces above are as follows:

Is this some kind of slick identity fraud meant to juice up property values, or is it the innocent reality of a market driven by money and perception?

"For a half a second I'm going to defend the folks I criticized," said Constantine Valhouli, one of three founders behind Neighborhood X, a consumer-focused real estate and analytics firm. "There are no formal neighborhood boundaries drawn up the city. It's a mental construct."

The civic boundaries established by the Fishtown Neighbors Association are defined by bylaws that were written in the early 2000's when the group was founded. While FNA considers them a generally accurate reflection, it could be said that Fishtown is a state of mind.

"Neighborhood associations are a good indication of what those boundary definitions should be," Valhouli said. "Ten years ago, you could really tell when Fishtown ended and when Kensington began. You could see where properties were being worked on and where the revival hadn't yet taken hold."

The expansion of what's considered Fishtown sometimes produces laughable results on Craigslist, for example, where properties practically on the doorstep of Temple University get called Fishtown in a generic listing. We've also seen the rise of terms like "Port Fishington" to describe gray areas.

"Something as small as the metrics one is using to discuss a neighborhood and its evolution can be critical." — Constantine Valhouli, NeighborhoodX

Valhouli has described this phenomenon as "neighborhood mitosis," in which parts of a city split off into cells. It happens in cities all along the Eastern seaboard. Brooklyn has even become the subject of its own "Brexit" in New York City.

NeighborhoodX found that Redfin's map of Fishtown extends north of Trenton all the way to East Lehigh Avenue and past York Street all the way east to E. Lehigh Ave. That means RedFin's "Fishtown" includes almost all of Olde Richmond, part of Kensington and a section of West Kensington.

"Brokers and developers are naturally going to glob a couple blocks on because they want the cache of Fishtown," Valhouli said. "It's not just in an emotional and intangible sense. It also creates a reason to accept a higher price."

An Oct. 26 search for "Fishtown" on RedFin turned up 202 listings, many of which were correctly identified as being part of another neighborhood and therefore excluded from the analysis. Among the 152 listings that remained, on 45 percent of them were actually in Fishtown as defined by the FNA. About 28 percent were in Kensington and 27 percent were in Olde Richmond.

A TALE OF 'TWO CULTURES'

Is all of this liberal cartography so unusual? Not necessarily, according to Ken Milano, the Fishtown historian behind Philadelphia Genealogical & Historical Research Services.

"That's always kind of been the case," Milano said. "Fishtown was once a subsection of Kensington and never really had a government so to speak."

Milano looks back on his years growing up in Fishtown — as a kid, his ruffian crew viewed it as Kensington — and sees a lot of different factors contributing to its elevated status.

"It's more of a localism," Milano said. "And it depends on who you ask. What denomination of church do you belong to, what color is your skin? You'll get all sorts of definitions of Fishtown. Realtors are thought of as another one of these groups who decided to come up with their own boundaries."

Consider that the Wells Fargo bank at the corner of Frankford and Girard — what Milano and most others agree is the "heart of Fishtown" — used to be Kensington National Bank.

For realtors, stretching neighborhoods is a matter of expanding the catchment to be in the most marketable areas of a city. They pay a whole lot of money to sites like Zillow, Trulia and RedFin in order to get direct leads on specific properties and prevent having potential business referred to their army of competitors.

Each of these sites uses different business models — Trulia's old crowdsourced method was bounced when it was acquired by Zillow in 2015 — but at the end of they day, the vast majority of people looking for homes and apartments are most likely to jump on Zillow before picking up the phone to talk to an agent. These border expansions are, to some extent, an implied cost of doing business. It's about generating as much interest in as many properties as possible.

The problem is that it can get way out of hand, according to Valhouli, and potentially mislead consumers about the places they choose to live.

"A decent map is the foundation on which every level of analysis is layered," Valhouli said. "If maps are off, the averages that result from those listings are going to be different, and it will affect how brokers list the homes and how people value them."

A larger national analysis of listings sites revealed that in some areas, their maps were 50 to 80 percent off the boundaries that best reflect the markets and expectations of the neighborhoods in question, Valhouli said. While he acknowledged that RedFin tends to have solid data, the Fishtown case presents a clear example of what NeighborhoodX wants to expose on these sites.

"In some ways, they were all pretty awful, but different parts of awful," Valhouli said. "They invented new ways to be awful. Our whole goal is to add clarity to the markets. We want to rip out the veil of public relations and help people make decisions based on what is happening."

Take last year's RealtyTrac report that found "hipsters" in Fishtown to be among the nation's best at profitable home flips, or RedFin's 2015 report that found Fishtown was Philadelphia's most competitive neighborhood for home buyers.  Compelling and informative, yes, but do they tell the whole story?

"If the median price in Fishtown went from $100,000 to $400,000 over the last 10, 15 years, that doesn't factor in the rehabs and high-end condos that have sprouted up and caused it," Valhouli said. "It doesn't really apply to the old rowhomes. Something as small as the metrics one is using to discuss a neighborhood and its evolution can be critical."

"I certainly like the price of my home's appraisal," he said. "I like the idea that apartments nearby have been renovated. There are no more crackheads. People actually put out their trash. The bars and restaurants, I think that's wonderful."

"Back in the day, we wanted to get the hell out of here. Fishtown? What are you talking about? You wanted to move to the suburbs." — Ken Milano, Philadelphia historian

Could all the hype Fishtown is getting be a threat to its character? Is that even a fair question, or is it just the kind of thing writers write to stir up a conversation?

"I think for sure it's a threat to Fishtown's character," Milano said. "Not only did we have character, we had characters. I think we're losing them because of the cost of living. Now, I'm not part of the newer generation, the artists and people who are excited about being here. Back in the day, we wanted to get the hell out of here. Fishtown? What are you talking about? You wanted to move to the suburbs."

"I don't see it being as stable anymore," Milano said. "I don't know that crime has gone down, either. "There's been more people coming from the outside. There used to be fights and now we see more home invasions and muggings by the El. The people who live here stay on top of it, though. They call the cops."

There are always going to be spirited, often fierce debates about the pros and cons of gentrification — or neighborhood change, or whatever you want to call it. Those transformations are as real as the street level identifications residents have with their neighborhoods.

Valhouli believes NeighborhoodX will put these issues to practical tests and combine the results with stories that resonate in a way that hasn't really been executed the way his team envisions it. They are rolling out new analyses and features on an ongoing basis ahead of an official launch.

"We want to go slowly enough to get the detail right and get the clarity together," Valhouli said. "A lot of companies follow the idea of minimum viable product, hoping they can iterate on the fly. We're saying let's get something right and not have people deal with something that's partial. We're taking the sloth approach."

In the meantime, Fishtowners probably shouldn't start freaking out and pointing fingers any more than that tends to happen everywhere under the sun. The neighborhood's new vibrancy and allure are good things, as long as there continue to be characters.

"I feel like we have two cultures here," Milano said. "There's old-timers and the newcomers, and at least they do get along together. Overall, it's wonderful."