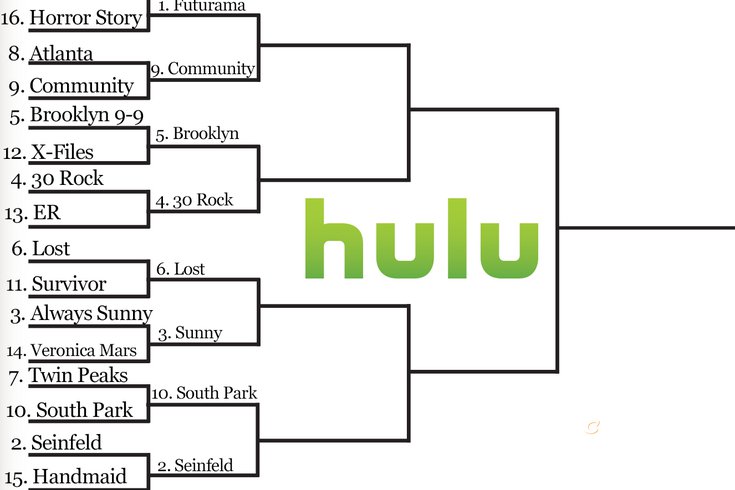 A look at the eight remaining teams in the Hulu region.

There was a general idea (at least here at PhillyVoice) that comedies would dominate this competition, and after seeing three powerhouse dramas in the Netflix region take all sorts of punishment from sitcoms, the half hour comedy shows it is also king here in the Hulu region.

Monday, we commenced voting on Netflix shows, you can still cast your vote in the second round right here. You can also vote for Amazon here, and HBO here.

Today, we have seven comedies (and Lost) still breathing. Vote below. Our sports staff also weighs in because, well, what else do we have to do?

Tale of the tape: Futurama (59% over American Horror Story), Community (57.2% over Atlanta)

Evan Macy: I feel like Community is underrated as one of the best recent comedies and it should be up there with The Office, Parks and Rec and others. It is incredibly smart, and incredibly rewatchable. Bender is great. But Greendale is better.

Matt Mullin:  Futurama was a show that was literally ahead of its time. I don’t think it deserves to be a 1-seed over Seinfeld, but it’s good enough to get past Community, which definitely had it’s moments — the first paintball episode is an all-timer — but it wasn’t as consistent as Futurama.

Kyle Neubeck: One of my all-time favorite shows and a comedy that has some surprisingly touching moments. If you can watch Jurassic Bark without getting a little emotional you probably don’t have a soul.

Jimmy Kempski: Way back in the day, my first job out of college was selling Xerox copiers/printers/etc., and my territory was Rockefeller Plaza. So whenever I watch 30 Rock, I’m always looking for stuff in the background that I recognize. This is an entirely useless reason for them to advance, but I’ve never seen Brooklyn Nine-Nine, soooo... 🤷🏻‍♂️

Evan: Brooklyn Nine-Nine is on my list of shows to watch (Matt suggested it), but 30 Rock, for me, is as good as at gets for mindless background watching. Also, Alec Baldwin's Jack Donaghy is one of the best characters of all time.

Matt: Brooklyn Nine-Nine is a really funny cop show, one that was much funnier than expected when I first heard about it. But 30 Rock is an all-time great and one of my favorite comedies ever, so this one wasn’t really tough.

3. It's Always Sunny in Philadelphia vs. 6 Lost

Matt: This is, by far, the toughest matchup so far in my mind. Lost was a game-changing show, and although the ending wasn’t as satisfying, it was one of those shows that’s great for binging because every episode ends with a cliffhanger — and now you can just hit “Next Episode” and not have to wait another week. And, as you can tell by my love of Westworld, I'm a huge fan of puzzle box shows. That being said, if you’re trying to get lost (no pun intended) in your content, Always Sunny might be the better choice during these uncertain times — they even have a quarantine episode. These are two of my favorite shows, but for this matchup, I’ve got to go with the local team.

Jimmy: It’s too over-the-top these days, but the first four or so seasons were some of the funniest TV I’ve ever seen. I can remember when I first discovered it, I downloaded the first 2 seasons on my iPhone, and watched them on the bus on the way into work in Manhattan. In that setting, it’s just understood that it’s quiet time. Everyone should just shut the hell up for 30 minutes, or expect mean glares all around. Watching those 2 seasons, I was trying not to laugh out loud so hard that I wound up laughing harder than I might have in an otherwise laugh-appropriate setting.

As for Lost, my ex-wife used to watch it, and I tried to get in too late. I remember our conversations going something like this:

“What is that guy doing?”

Kyle: There are times (including the end) where it went completely off of the rails but it is a weird mash up of so many genres that somehow works. In the argument for best pilot episode ever, as a bonus.

Evan: So basically two of the most influential TV shows in modern history. These two should face off in the regional final — damn you Rotten Tomatoes... I have to respect Seinfeld but it's by a hair.

Matt: South Park is a classic, and in any other matchup in this region, it would've had a chance. Unfortunately, it got matched up with one of the best teams in the tourney.

Kyle: South Park gets a raw deal seeding wise here but you have to respect one of the all-time great sitcoms here. There are episodes that don’t hold up because they’d be solved with having a cell phone in today’s world but it is one of the most rewatchable shows of all time.