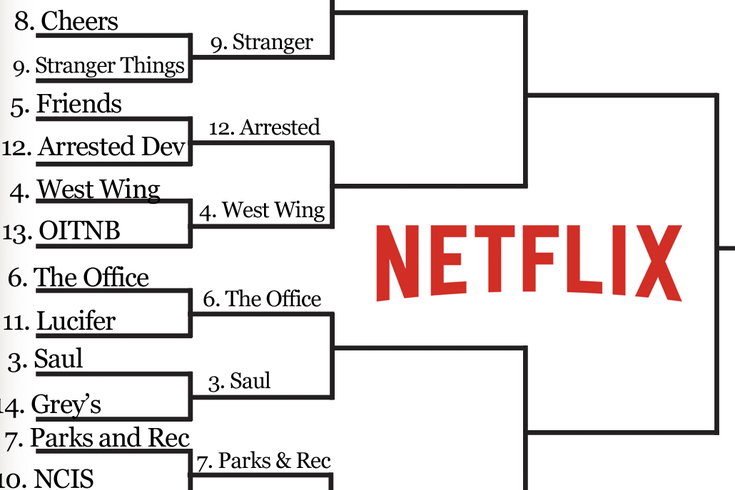 The votes have been cast and the Netflix region, so far, has mostly gone to form with the top four seeds advancing.

Arrested Development pulled off the upset over Friends, the No. 5 seed — but as college basketball fans know well, a 12-seed wins every year.

But now things get interesting. Would you rather stream one of the greatest dramas ever made — or watch hours of mindless comedy? That's what we'll be asking you to decide as we begin our march to determine the best show to stream during self-quarantine.

If you haven't you can also vote on the other regions in our bracket with the links just above.

This week, we will give you four chances to vote on the second round, starting with Netflix below. Our sports staff also weighs in because, well, what else do we have to do?

Evan Macy: This is the only of the four Netflix region matchups that isn’t across genres. Breaking Bad, as the No. 1 seed and one of the most influential and important dramas ever made, has to be a favorite here. I just finished binging it in totality and, wow, it is so impressive as a body of work.

Kyle Neubeck: I love the 80’s aesthetic of Stranger Things but this is a good show vs. a great show.

Jimmy Kempski:  Breaking Bad is my favorite series ever, so that’s an easy one.

4. The West Wing vs. 12. Arrested Development

Evan: The West Wing is the greatest TV show ever made. I have watched the entire series all the way through double digit times and can quote every episode from seasons 1-4. It's a hard sell in this day and age, but it's an incredible escape to an America that is governed by intelligent, passionate and capable people.

Kyle: The West Wing is a political show for people whose lives are not actually impacted by politics.

Jimmy:  I’ve never seen a single episode of The West Wing from start to finish.

Matt Mullin: I used to watch The West Wing with my grandmom every week, so there's definitely some nostalgia built in. But Arrested, even including those newer Netflix seasons, is just too funny not to advance.

Matt:  It was really hard picking The Office over Better Call Saul, because one is an incredibly written drama and the other’s most memorable line is “That’s what she said.” But, since I had already picked one Vince Gilligan show in this region — and because I’m still a season or two behind on Saul — I’ve got to go with Dunder Mifflin here.

Kyle: The Office will probably win and I just want everyone to know in advance they are wrong and I hate them.

Jimmy:  I like Better Call Saul a lot, but it’s not as good as Breaking Bad, an impossible bar to eclipse, and while I think it should strive to become its own show without using Breaking Bad as something of a crutch, I also don’t know how they can avoid that. As for The Office, it’s maybe the best “background noise while you’re doing other things” show ever.

Evan: Mad Men might be best known for all the Don Draper drama, with his identity and his womanizing and such, but it is hard to get any better than the advertising storylines in this show. They are just magnificent.

Matt: I wish this was Parks and Rec making it to the Sweet 16 — and if it had been matched up against Better Call Saul, it probably would’ve. But none of the other shows in this region (with the exception of maybe Breaking Bad) would have a chance at beating this. I just finished a rewatch of Mad Men over the weekend, and it was even better the second time around.