Plus, find out how you can vote on the Netflix and Hulu regions 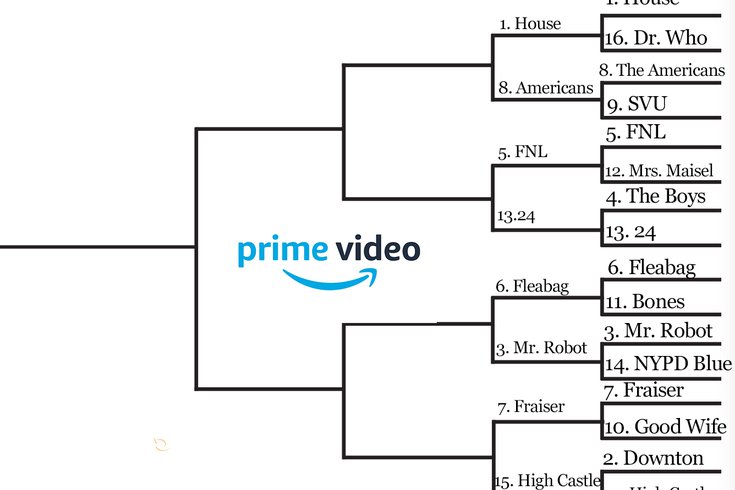 We are back on the drama train, as Amazon Prime's streaming service appears to be most utilized for its hour-long offerings. There are some sleeper picks in this region for sure, like Friday Night Lights or Fleabag, but it does seem like the overall popularity of the shows remaining is less so than other regions.

Monday, we commenced voting on Netflix shows, you can still cast your vote in the second round right here. Tuesday it was Hulu, which is still voting here. And Thursday, HBO's juggernaut of shows started taking votes.

Today, we have the eight remaining Amazon Prime offerings. Vote below. Our sports staff also weighs in because, well, what else do we have to do?

Matt Mullin: I haven’t seen more than an episode or two of House, and it wasn’t really my cup of tea. The Americans, on the other hand, is an absolutely incredible idea for a show that was well acted and expertly executed. I’ve probably seen 50-75% of it while my wife was binging it, and almost every time she had an episode on, I struggled to concentrate on what I was doing because 1. Kerri Russell is perfect, and 2. The level of suspense is as high as any show I’ve seen.

Evan Macy: Friday Night Lights has a ton of holes in its plotting (Landry, what the hell man?), and is a little over the top at times but there are some really memorable characters (Tim Riggins FTW) on the show and it has what I believe is one of the best pilot episodes of all time. It is extremely rewatchable, and despite it being over the top sometimes and, well, ridiculous with how it randomly decided half its characters are high school sophomores in Season 2, it's gotta be one of the best dramas left.

Matt: I know this is going to be a hot take, but I didn’t think Friday Night Lights was anything special. In fact, after the first season, I didn’t really like the show at all (with Coach Taylor and his wife as the obvious exceptions). It felt more like a soap opera masquerading as a sports drama. Then there’s 24, a show that was ahead of its time — the first season was set to air just a few days after Sept. 11 — and was unlike anything anyone had seen to that point. It got a little repetitive and outrageous in the later seasons, but those first few seasons of 24 were epic. In fact, it was the first show I ever binged back in college. My neighbor had Seasons 1-3 on DVD and I locked myself in my dorm room one weekend and ripped through an entire season. If we’re looking for the best shows to binge during quarantine, you can do much worse than Jack Bauer.

Evan: I will cast my vote for Fleabag, which was a lot of fun to watch and was very very different. I have not watched Mr. Robot but it's on my watch list, and my best friend David apparently loves it so much he still has the finale in his DVR queue because he doesn't want it to end. Fleabag however, really got the most out of its 12 total episodes and despite them being just half hours, it feels like the show has 50 chapters already. It is deserving of its praise.

Matt: The Man in the High Castle started with a lot of promise, but with so much to stream these days, it eventually got lost in the queue and I don’t think I made it past the middle of the second season. I loved the idea, thought it was well shot and well acted, but it just eventually ran out of steam for me. Still, it’s a great show if you want to imagine what it would be like if Nazis ran America. Frasier, on the other hand, is a great sitcom if you want to see what it’s like being a rich white dude in Seattle. It’s also very funny and one of those great shows to just have on in the background while you’re doing other stuff. I know that’s not the highest endorsement for a show, but it’s worthy of a re-watch.