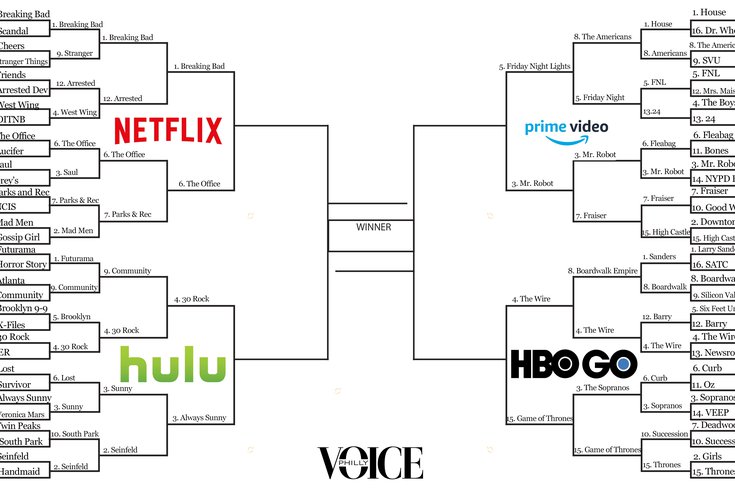 We couldn't be more excited to see what happens when we pit the final two shows from Netflix (and from Amazon). We are three rounds of voting away from determining once and for all which TV show is the best one to stream while self-quarantined.

Be sure to also vote in the other two regional final match ups in our HBO and Hulu regions right here.

The seeding and full body of TV shows in our bracket are of less relevance now, but here's a little bit about our methodology. We took 64 teams, 16 from each of four regions (Netflix, Hulu, Amazon Prime and HBO) and threw them onto a bracket (seeded using Rotten Tomatoes viewer ratings). You can view the full original bracket here.

We are nearing a champion, and without further ado, we'd love to have you share your thoughts. Please give us your vote in the matchups below. We'll share our opinion too since, you know, no sports and all... 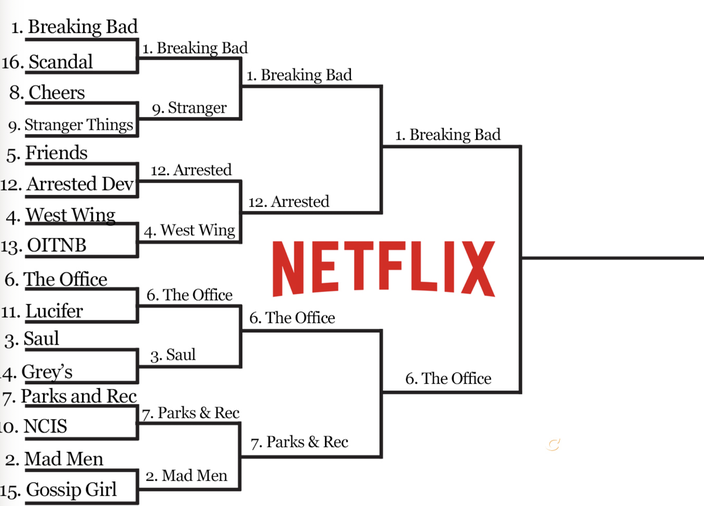 Tale of the tape: Breaking Bad over Arrested Development (74.1%); The Office over Parks and Recreation (66.8%)

Evan Macy: The winner of this, in my opinion, will probably win the bracket. The only team I can think of that could stop either show is Game of Thrones in a possible championship bout next week. Breaking Bad and The Office couldn't be less similar content and tone, but they are of the same generation. Each broke into the mainstream as smash hits during a broadcast (or cable) television run, and both got a second life on Netflix around the same time. Breaking Bad is the better show, The Office is the easier watch. I am picking BB here — going quality over meme-ability (though there are tons of great Walter White memes too), with no expectation that it will win. I expect it to be super close.

Matt Mullin: I’ll admit that the first time I watched Breaking Bad, I only made it about three episodes in before deciding this show wasn’t for me. But every time I told people that, they’d work their asses off trying to convince me that it was worth it if you got through the first handful of slower, more depressing episodes. Well, I did, and boy was it worth it. It’s always hard to compare prestige dramas, especially one as dark as Breaking Bad, to laugh-out-loud comedies, especially one as goofy as The Office. But Breaking Bad is the better show. However, that’s not the real question here. We’re trying to find the best show to binge while in quarantine — and many people may be looking for something a little lighter — so I wouldn’t blame you if you vote for The Office here. But to me, it’s easy. Sorry Michael Scott, I’m not crossing Walter White.

Jimmy Kempski:  For me, this matchup is like when Villanova “only” beat West Virginia by 12 during their 2018 championship run, when they blew out everyone else.

Kyle Neubeck: If I haven’t made it clear enough yet, The Office stinks and Breaking Bad would win in a blowout in a just world. 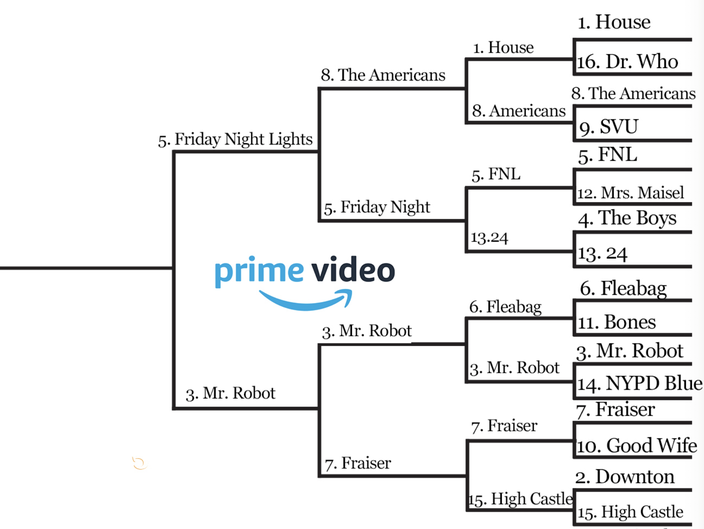 Evan: All I know about Mr. Robot is my best friend David was obsessed with it while it was on the air and swears it needs to be my next binge. I will get there, but until I do, my allegiance here is to Friday Night Lights, a flawed but incredibly enjoyable show that is pretty easy to rewatch. Whoever wins this weaker region will need to face the winner of HBO's final, so I am not putting much stock in either of these winning the title.

Matt: I was really hoping Frasier was going to advance here, since it was my favorite of the four remaining Amazon shows, but alas, it lost to Mr. Robot in a nail-biter. I haven’t seen either of these shows all the way through — only the first season and a half of FNL and all but the last half season of Mr. Robot (I’ll be done before we’re allowed back outside, don’t worry) — but I feel pretty confident in selecting Mr. Robot here. FNL wasn’t anything special to me, while Mr. Robot was an edge-of-your-seat mind-[bleep]. There are also a ton of great performances — including Rami Malek, obviously — but it’s worth it just for BD Wong, who steals every damn scene she’s in (no that’s not a typo). I haven’t finished it yet, but I doubt the final few episodes are going to change my mind.

Kyle: I honestly stalled out watching the second season of Mr. Robot but I think that was mostly due to watching it too late at night and missing details I had to circle back on. The first season was excellent TV, in any case.