According to report, alcohol is the deadliest substance of all

New research has found that marijuana is far safer than alcohol and many other recreational drugs – a tally mark for team marijuana legalization.

“The low risk of cannabis use suggests government should use 'a strict legal regulatory approach rather than the current prohibition approach' to manage the substance, the researchers write.” – The Huffington Post

The research, published in the journal Scientific Reports and reported on by The Huffington Post, calculated the risk of death associated with the recreational use of 10 common substances.

Alcohol was found to be the deadliest substance of all, followed by heroin, cocaine, tobacco, ecstasy and meth, the study found.

All the way at the bottom of the list is cannabis, which is about 114 times less deadly than alcohol, according to the findings. 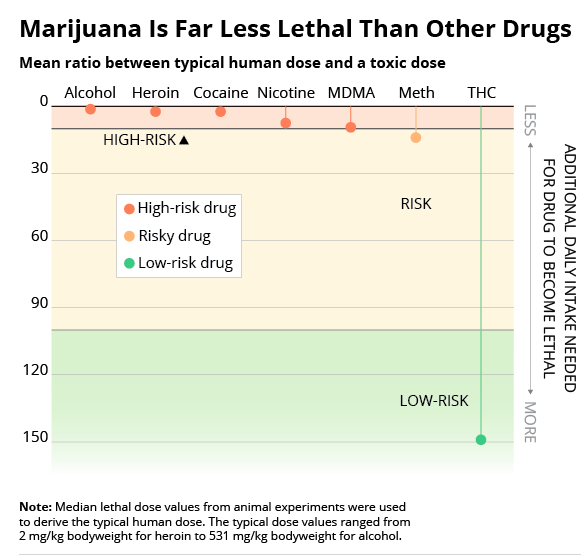 The fact that marijuana was found to be a lower risk compared with the other drugs isn't too surprising, according to The Huffington Post article, which points to similar research that’s found marijuana is a substantially safer recreational drug than many others.

What is surprising, however, is the lethal risk of alcohol - found to be potentially more deadly than heroin.