On the first day that Philadelphia decriminalized marijuana, Mike Whiter was issued a citation for smoking in public outside City Hall.

Have you ever wanted to smoke a joint on the Rocky Steps? Well, you'll get your chance next week (barring any unforeseen legal or logistical entanglements).

Next Thursday – October 20 – marks the two-year anniversary of Philadelphia's legal decriminalization of the possession (and smoking) of small amounts of marijuana.

It’s also the two-year anniversary of Mike Whiter – a U.S. Marine Corps combat vet who smokes it to stave off post-traumatic stress disorder flare-ups – testing that brand-new law to the tune of toking up outside City Hall and getting a $100 citation.

To mark the occasion – it’s considered a turning point of sorts in the local legalization cause’s narrative – marijuana activists N.A. Poe, Chris Goldstein and others plan to host a “Pop Up Weed Garden” on the steps of a Philadelphia Museum of Art that has nothing to do with the event itself.

“Refreshments and snacks provided,” reads the announcement for the event, posted to Facebook on Thursday morning, referring to cider and Halloween cookies that Poe plans to bring along.

“B.Y.O.W. (Less than 30 grams),” it continued, noting a bring-your-own-weed spirit that abides by the reduced-repercussions spirit of the law.

One week before the event – which was recently hatched over a joint during a brainstorming session between Goldstein and Poe – the latter explained the inspiration and motivation behind it all.

“We’re latching onto the ‘pop-up’ craze, a garden party meets [Diner en Blanc],” said Poe of a trend that’s seen beer gardens surfacing across the city. “Philadelphia is such a beautiful city, and the Art Museum is such a well-known spot. We figured it’d be a great place for people to gather, hang out and celebrate the anniversary.

“Three years ago, I’m getting tackled on federal property for smoking weed. Three years later, in the same city, we’re throwing a garden party on the steps of the Art Museum. I’m proud of that progress." --N.A. Poe, marijuana activist

“We’ve allowed so much culture to grow in Philadelphia since decriminalization. The boot came off of our neck after that. Instead of just being happy with the idea that no one’s going to get locked up for weed, for us in the pot community, this is going to be our ‘coming out’ party to a certain extent. We’re going to say, ‘We’re here as a community, we’re trying to help the city and do good things. We’re not just stoners.'”

Poe said he viewed it as a chance to expand the umbrella with a happy hour-type feel that lets people who haven’t seen their events before stop by and take it all in, whether that involves their lungs or not. They don’t see it as a regular event, but rather a chance to help “normalize the culture.”

“If you come [next] Thursday, or have come to our parties [at Connie’s Ric Rac and other locations], you’ll see people from all walks of life,” he said. ”An experiment like this might bring out some interesting folks, maybe some more people will say, ‘Hey, I’m a cannabis consumer and I’m going to hang out publicly and smoke marijuana.’

“We’re in the middle of a culture war. We’re coming out, and we want to be accepted. The pot dollar is an amazing resource for businesses in Philadelphia: Food, entertainment, concerts. Businesses that are willing to take the risk at this point are going to reap the rewards. Are we being bold as well? Yes. But we’re not necessarily ashamed of what we’re doing. That’s the point. We’re doing it because that’s who we are. If that’s who you are, come join us, but if it’s not who you are, leave us alone.”

At 1 p.m. that day, organizers also plan to hold a press conference urging Mayor Jim Kenney to “find a way to get rid of the fine altogether,” he said of the $25 fine for possession of less than 30 grams and $100 fine for publicly smoking still on Philadelphia’s books. 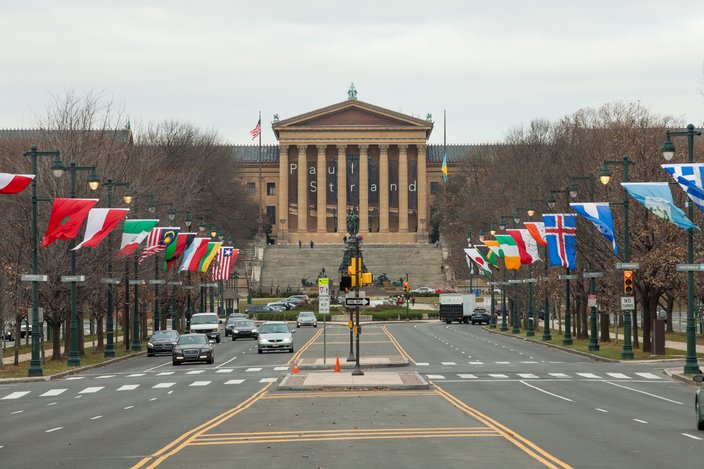 While smoking a joint on the Art Museum steps would put someone at risk of a $100 fine, a Philadelphia Police Department spokesperson declined to say whether they’d monitor the pop-up garden, but noted that “officers will be assigned accordingly.” (The organizers hadn't run their plans by museum officials, from whom calls for comment weren't immediately returned.)

For his part, Mayor Jim Kenney "is largely happy with the results (of marijuana decriminalization) and expects the existing inequities to decrease as we continue to reduce unconstitutional (pedestrian) stops. There will likely be some tweaks to the legislation in order to accommodate the state legislation on medical marijuana," according to spokeswoman Lauren Hitt.

“Three years ago, I’m getting tackled on federal property for smoking weed. Three years later, in the same city, we’re throwing a garden party on the steps of the Art Museum,” he said. “I’m proud of that progress. I’m proud of how we’ve positioned ourselves to change the idea of what a cannabis consumer is. Hopefully, that’s emboldened people to be able to stand up for themselves."

He said the point of the event isn't about brazenly flaunting the law, either.

“We’re not looking for any confrontation,” said Poe, who expects a couple hundred people to attend even if they’re just gawking from afar. “As it’s the two-year anniversary, if they bust us, they look bad. So, I’m going to take the anniversary to be as bold as we can because it is a celebration. … We’re just relying on the hands-off approach, the laissez-fair attitude, that the police and city has had toward marijuana.”